All packed up and ready to head to Utah for Christmas.  I'm not taking the big road trip this year -- to Boise, Salt Lake, Palm Springs and home.  Just going to Utah for a few days with the fam.   I just realized I'd not posted my December column for Quick Throttle -- it's another one of my "rants", this time about the cost of license plate fees.

It’s December already -- the end of another year.  A time of reflection and hope and peace on earth good will towards men and all that.   And being a guy who tends to buy motorcycles shortly after the new model year bikes come out (usually as early Christmas presents to myself), it’s also a time when my license tab renewals for the scoots hit my mailbox.  To hell with “peace on earth good will towards men”.  I’m ticked!

For my 2008 Softail I’m paying a whopping $157.75 to renew the license plate for 2013.  And yeah, I have custom plates so they are always more expensive, so lets factor out the $30 fee for that.  I’m still paying nearly $130 to renew the tabs.  And this is after I’m smart enough to deduct the “optional” $5 state parks fee that they add on but you are allowed to opt out of at the end.   A sneaky little trick that if a business tried to bill like that the state would be all down their throats, but I guess the state can do it with no problem.

And what do I get for that $130 bucks?  Let’s dive into the itemized bill and see shall we?

There’s a $3.00 “filing fee” that goes to the county in which the fee is paid.   I’m gong to assume this covers the salary of the people processing my renewal and mailing me the little sticker.

Then there’s an RTA (Regional Transportation Authority) tax of $37.00.  This is for those of us who live in the Sound Transit service area, and pays for that system.

Next is a “Transportation Benefit District Fee” of $20.   This one is imposed by the People’s Republic of Seattle and applies only to those of us so lucky as to live within the city walls.  According to the City, most of this money goes to “planning” as well as to “mobility enhancement aimed at achieving shifts in mode shares from vehicles to walking, biking and transit.”   In other words, none of this goes to actual things that will make my motorcycle ride any better.

And then there’s a $30 “License Fee”.  This is the old state fee that was once based on the value of the vehicle that voters turned into a flat $30 fee and got Tim Eyeman in the paper for the first time some years back.   This goes to construction and maintenance projects.  Finally something that is earmarked for roads – the things motorcycles and cars actually drive on! (And why we pay license fees at all.)

But wait, there’s still more.   There is a $10 “weight fee”.  Yeah, I’m a little overweight – always have been – but geez!  Charging me for it?  Oh wait, that’s for the bike.  All 700 pounds of Harley iron.  According to the state it funds  “transportation needs”.  It doesn’t say what “needs”.  Then I have a $2.00 fee for “Wildlife Rehabilitation” that funds the “wildlife rehabilitation program managed by the Department of Fish and Wildlife”.  What in blazes this has to do with vehicle licensing I have no idea.  If anything it makes roads less safe since it likely increases wildlife, which might run out in front of me on my bike and cause me to have an accident 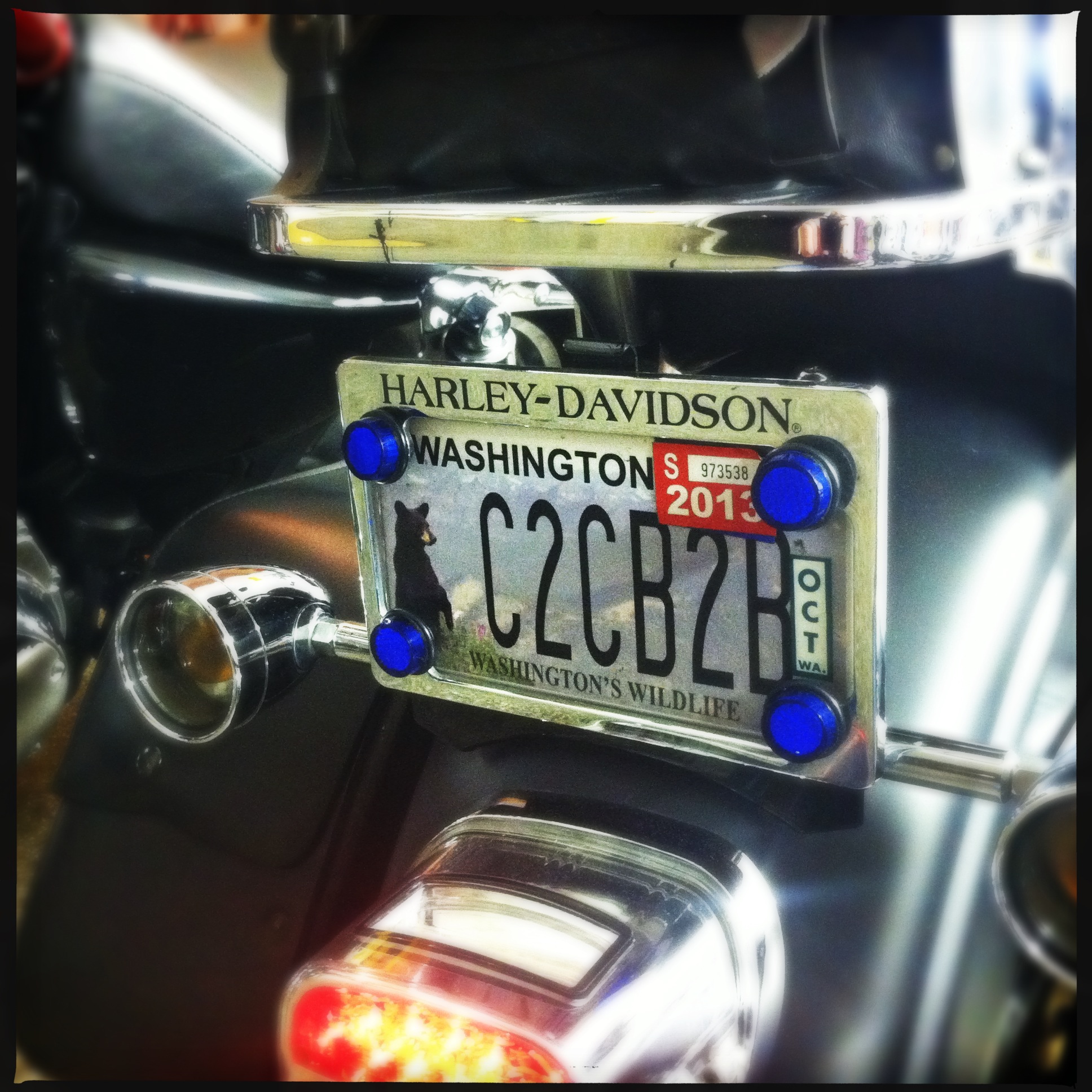 Then there is that pesky sneaky little negative check-off $5.00 “donation” fee for State Parks, which can be removed if you want to, but they add it to the bill hoping you don’t.  Plus a .75 cent fee for “license service”, which pays for the computer system to send me notices telling me how much my fees are.  In other words a fee to tell me my fees.

And lastly there is a “Congestion Reduction Charge” of $20, which does not refer to a box of Sudafed.  Using the same authority granted by the Legislature that gave the city of Seattle the ability to charge $20 for silly nonsensical stuff, King County now gets to impose another $20 which funds King County Metro Transit bus service.   Now it’s a stretch, but this does help a bit in that better bus service means more people ride it and there are less cages on the road out to kill me.

Now I believe in paying for what I use.  That’s why I think bicycle riders should pay a license fee for using bike lanes.  I have no problem with that – I don’t expect something for nothing.   But if I’m paying damn near $130 bucks for the privilege of driving on the roads, I want roads!  I want smooth, nice, maintained roads.  I’m not getting that.  And that’s just the cost for one bike – I’ve got three bikes and a truck!

What am I getting for all that money?  I get roads that almost require a kidney belt to ride they are so rough (this despite the third highest gas tax in the country that’s supposed to pay for roads).   I get a reasonably good bus system that I occasionally use and that takes some cars off the road.  And I get a lot of wasted dollars on things that don’t make riding (or driving) any better but make other people feel good.

But hey, it’s the Holiday Season right? It’s all about “giving” and making others feel good.   So, I’ll grumble and grouse like Scrooge, write a big ass check to DOL and mail it off, and get a little tiny sticker as my present in return.  Then I’ll turn on some seasonal music and dream of the road.  “May peace on earth fill up your time, and brotherhood surround you.  May you know the warmth of love and wrap it all around you.”  Happy Holidays!