Yesterday was my 51st birthday.  It's funny to think that I'm that old.  And I know a lot of folks will say "that ain't old", and in a big picture sense they are right.  But still, once you start getting up past 40, you kind of officially join the "old guys" club, albeit perhaps as a junior member.  I don't think of myself as that old -- indeed it's funny to hear the words "51" come out of my mouth when asked -- for cryin' out loud I'm past fifty now!  Fifty is such a nice round number too -- significant, and a major time point marker.  It got me to thinking back (or trying to) to my 1st birthday.   Of course at age 1 you don't remember anything, but apparently at age 1 I had a party and a little cake my mother made. 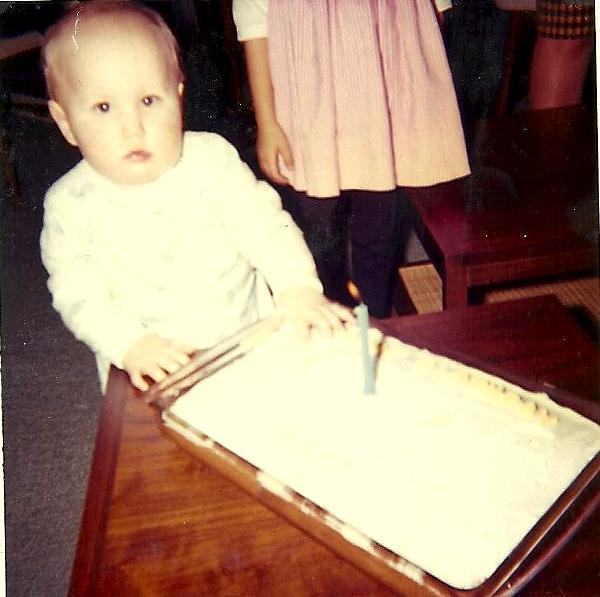 When Mom called to wish me Happy Birthday yesterday she said its hard to believe that she has a 51 year old son -- that it doesn't seem like 51 years ago they drove up to Ogden, Utah to get me, and to her it seemed like just yesterday.   Being an adopted kid, my Mom and Dad went to some mysterious place called "The Agency" to "get" me.  They never were shy about telling me, or my brother and sister, that we were adopted, and it's never been something that bothered me.  But where most kids have a story of their folks going to the hospital to give birth to them, I don't.   I got picked up, like on a run to Costco or something -- pick up some milk, eggs, oh and a baby.

To hear Mom tell it, she was at her desk on December 20th, having just gone back to work after my older sister Kay Lyne had died after only a few days of life. Kay Lyne was the only child my mother and father ever had naturally and she died suddenly and unexpectedly after 13 days.  Mom got a call at work from "The Agency" saying they had a little boy and did they want him.   Mom didn't hesitate, quit her job again right then and there, and the next day she and my Dad drove 35 miles from Salt Lake City up to Ogden to pick me up.   Now according to my birth certificate, I was born in Denver, Colorado on December 11, 1961.   But my folks didn't pick me up until December 21.   I got to wondering, "where was I for those ten days and how did I get to Utah?"

Now you have to know that two intergal parts of my personality are a love of trains and a love of the lonely highway.   So when Mom was telling me all this yesterday, I started speculating in my mind that someone from "The Agency" hopped on a train -- maybe the Union Pacific's "City of San Francisco" or "Challenger", or even the Rio Grande's "California Zephyr" and went off to Denver to get me -- thus imprinting forever on my infant mind, a love of trains and train travel.   But then she said "The Agency" actually had someone drive over to get me and bring me back.  So I dug out an old pre-Interstate map of Wyoming and traced the road back then --  along the Old US-30-S from Ogden, up Weber and Echo Canyons, accross the high-plains of Wyoming, past Evanston, Little America, Green River, Rock Springs and into Cheyenne, and then South on US 87 into Denver.

In those days babies stayed at the hospital for a couple of days or so, and I figure it took a couple of days to drive back to Utah, but still there almost 7 days missing.   I have no clue, nor do I have any way of finding out what happend.  Maybe my birth mother took me home for a few days?  Maybe it took them a few days to figure out the paperwork or find a prospective family to adopt me, I don't know.  But after thinking about it, I now have a theory.

Driving across Wyoming in December could not have been a pleasant drive back in those days -- hell it can be a death trap still  today.  It's empty and desolate -- the wind blows all the time, and its prone to severe blizzards.  Interstate 80, the road that replaced the old US 30, still has frequent winter closures, and the road signs have warnings posted throughout Wyoming regarding weather and road closures, and they are not joking. 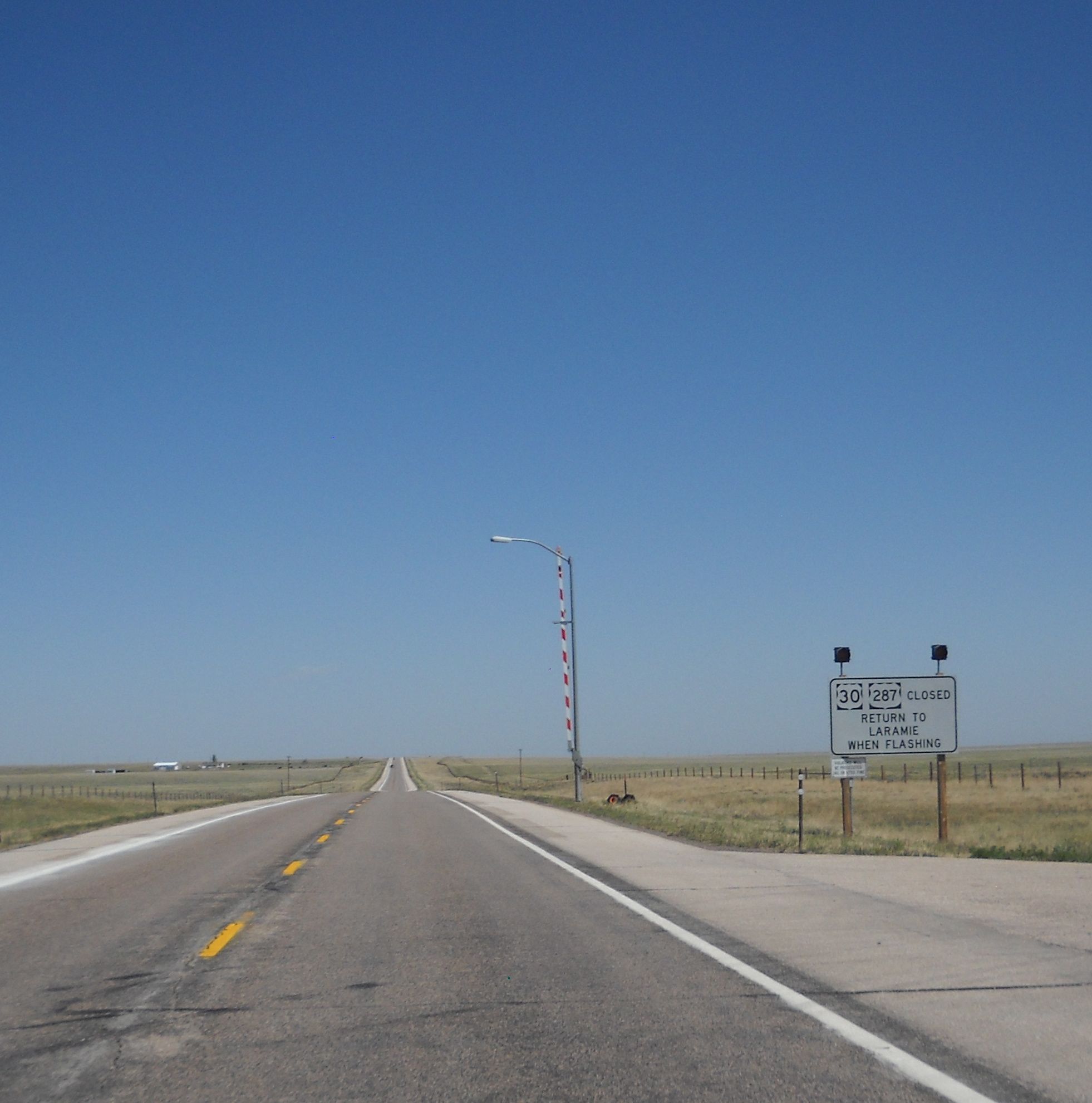 So imagine the poor lady (or man) who drove across the high plains of Wyoming in some big old land yacht of a sedan -- a great big Buick or Chevy or something -- on this exact same and very lonely road in this picture for more than 500 miles.  From Ogden to Denver and then back again to fetch me way back in December of 1961.  Not quite horse and buggy speed no, but I'm sure it was slow going, and probably made worse by weather.  Maybe the light in this picture was flashing back then and they had to wait out a storm in Laramie or some other small Wyoming town.   Its not hard to believe -- I had to wait out a storm for two days in May of this year in Rock Springs while headed back to Salt Lake on a motorcycle trip.   This could very well explain a lot of those missing ten days between my birth and when they handed me over to my Mom and Dad.  It took a while to drive over to Denver and back across Wyoming in late December of 1961.

It must explain why, like I've said many times before, this part of the West is in my DNA -- spending all that time right after my birth on this highway. These roads are imprinted on me like the streams of their birth are imprinted on young salmon.  I'm home here, I love driving here.  It doesn't scare me -- I'm home.   This road was my home for the first few days of my life, sitting in a big old car, staying in small motels or hotels, eating (or in my case being fed a bottle) at some roadside diner -- this had to imprint on my brain and is what shapped my character and made me love the vast emptiness of the Intermountain West, and started my insatiable hunger and wanderlust to be out on the road.

I've always been this way -- Mom says from an early age I loved going for rides in the car and would stare out the window and be just as happy and content as could be (as opposed to most kids who are bored on the road).  It's the only way to explain it -- the long car ride back to Ogden from Denver in the first few days of my life.  I bet its one reason I am who I am to this day and it all started 51 years ago on a drive across the high plains of Wyoming in December of 1961.    I owe a debt of grattitude to the person from "The Agency" who made that trek with me all those years ago.
Subscribe