This was a very fun column to write, and I think it's one of my better ones for that reason.  One of my best friends said I should write more "rants" like this because the thinks I'm quite good at it and I enjoy it.  It must have struck a nerve as I've had more than a few folks come up to me face-to-face as I've been out and about this month commenting on how much they liked it....

You would think that despite more than twenty years working in, participating in, and observing the political process, I’d be used to the oddities and the stupid things that policy makers do. You would think.  But I have to say that the politics of the Pacific Northwest and my state of Washington in general, and Seattle in particular never cease to amaze me.  I’m constantly shaking my head in wonder, amazement and in some cases embarrassment.  My neck hurts from all that shaking – but my chiropractor and my massage therapist love me.

Seattle just instituted a ban on plastic bags in stores, saying loudly and proudly to the world “look at us, we are green!”  I’m reminded of this when I forget to bring in a bag when I go shopping.  Not being a faithful NPR/PBS donor, I don’t have a mountain of tote bags for my “gift at the $20 dollar level.”  So I have to buy (the store isn’t allowed to give it to me) a paper bag.

Last I checked paper came from trees and this crowd doesn’t like logging either.  So I have to ask myself, “does this really do anything in the long run – in the big picture?”   Of course the answer is no.  “Oh, but every little bet helps – baby steps to start!” my enviro greenie buddies all say.   HOGWASH!

Folks on the West coast love to make big political statements, which are akin to pissing into the wind in most cases.   Particularly when it comes to the whole “Green” scene.  And to make it worse, the policies pursued by this crowd are often inane, not thought through, and may actually harm the environment more, while they reject obvious and common sense solutions.

“Give us some examples” I hear you say.   Well, aside from the plastic bag ban here we go:
•    Requiring the majority of cabs serving the airport to be Priuses – which have little luggage space and space for more than two people.  Or CNG powered cabs which means no trunk space.
•    Allowing only one company to pick up fares at the airport, thus any other company who picks up someone downtown and takes them to the airport has to return empty wasting gas.
•    Extreme recycling.   Gone to a restaurant in Seattle lately?  Can you figure out what goes in garbage, what goes in recycle, what goes in compost?  Its so complicated the restaurants can’t even figure it out.  No.  So you just throw everything into trash, or you do it wrong contaminating all the properly sorted trash.
•    Requiring meat trays at supermarket meat counters and take-away food containers at restaurants be “compostible” which means they leak and fall apart, which then makes my reusable PBS grocery tote bag unsanitary.
•    Declaring that hydro power from dams is “non-renewable” and not clean energy, and not letting it count towards some arbitrary amount of power that it has been decreed must come from “green sources”.   I guess that the water, once it’s past Grand Coulee Dam will never return and generate more power, nor will it ever rain or snow again in the mountains.

And my favorite latest example:  Taking out a large number of revenue generating parking spaces in city owned garages, and State public garages to put in electric vehicle charging stations.   Not only do we as taxpayers pay to rewire and install the hardware, but we also lose the revenue generated by those spots when normal cars park in them!

My office in Olympia overlooks the main visitor pay parking lot.  Last year the state took out two revenue generating spots and put in two electric charging stations.   I have yet to see a vehicle parking in them and using them.  I’m tempted to take an old extension cord and run it out of the grille of my Hummer so I can park there.   They did the same thing on the second floor of the city owned garage at the downtown Pacific Place mall.   All these spots – empty, not generating revenue for us, and costing us the money to put in these charging stations. 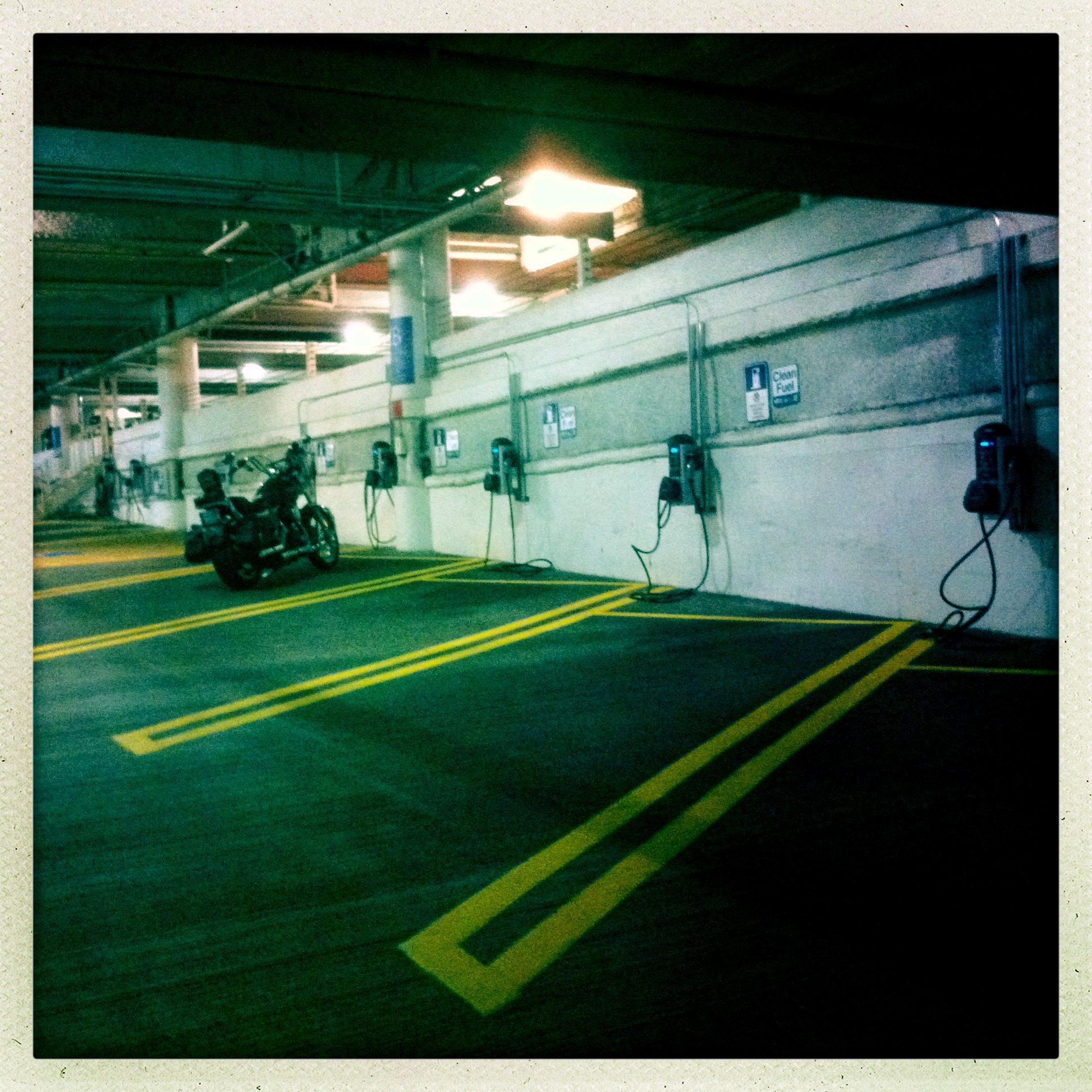 I could go on and on, but I won’t.   “But what does this have to do with motorcycles?” I hear you ask.   This is after all a motorcycle magazine, “I don’t want to read about flaky environmental issues” you say.

It has plenty.   You see, if this region, this state, this city were truly interested in promoting environmental causes, they would do everything they could to promote our sport.   Think about it.   My bikes average between 45 and 50 mpg.  That’s more than a damn Prius.  I put less wear and tear on the roads, and our two-wheeled cousins on scooters do even less and get even greater gas mileage.  We take up less space in parking lots, so they could be smaller.   We use less resources in the manufacturing process, don’t have a lot of plastic, rubber or toxic parts, and put out less carbon emissions.   It just makes sense.

If these folks were serious, they would do things like give motorcycles reduced rates on tolls.   They would  give us reduced rates on parking downtown.   They would give us all those parking spots in Pacific Place mall or the Capitol Visitor lot.  They would make the roads safer and smoother.  Hell, if they really wanted to they could even give us our own lanes like the bicycle guys get!

Wow!  Think about it – being separated from all those idiots in cages talking on their cell phones.   Couple that with free parking and reduced tolls, why we’d have a lot more bikes on the road and we’d all get to work quicker, happier, and using less gas and putting out less carbon dioxide.

And since we all know what a natural mood elevator being on a bike is, the whole grumpy grouchy Puget Sound region would be a much happier and friendly place.  Why we’d be so happy we’d forget to complain about having to bring our own bag to the grocery store!


Gary can be reached at roadsigns@comcast.net and you can read his blog at http://grgardner.livejournal.com
Subscribe