Starting the new year off with predictions of the future...not that I'm very good at predicting much. The art department however is getting creative with my photo in the header though...yikes! 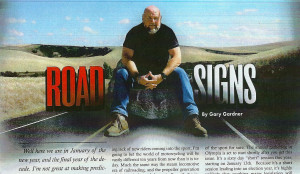 Well here we are in January of the new year, and the final year of the decade. I’m not great at making predictions at all, but I have to wonder what the world of motorcycling will be like ten years from now when the decade closes out. I would hazard to bet that in many ways it will be very different than what we are enjoying today.
For those of us who love the sport, who love the thrill of riding down an empty backroad, winding through the countryside with breathtaking scenery, and enjoying the wind in our face and the sun on our back. while exploring the places and things that make our world so fascinating from atop a motorcycle, I’m sure some of those elements will remain. But they will also change, and exactly how things will change, I have no idea. If I did, I’d be a rich guy investing in sure bet stocks. I’m not.
The core design of a motorcycle has pretty much stayed constant, and aside from a few cosmetic details here and there and bigger more fuel-efficient engines, a thirty-year-old Harley looks remarkably similar to a new one on the dealership floor today. The basic design elements have changed very little, nor has the functionality of a V-Twin gas-powered engine and 1-down, 4-up (or 5) transmission.
But as the world transitions away from gasoline powered engines to something else, I think we’ll see a radical change to our sport, and not just how bikes look, but how they function. Add to that the rapidly aging out of the traditional motorcycle riding generation, and the frightening lack of new riders coming into the sport, I’m going to bet the world of motorcycling will be vastly different ten years from now than it is today. Much the same way the steam locomotive era of railroading, and the propeller generation of air travel changed dramatically with the introduction of diesel locomotives and jet aircraft.
I’m still not convinced that electrically powered vehicles are the wave of the future, but they are on the horizon and as range and battery life increase I expect we’ll see exponential growth in them. And how does that affect how we enjoy our sport?  I love the long road trip, winding on back roads, making my way across the country, as Willie Nelson sang “Seeing things I’ve never seen before, I can’t wait to get on the road again.”  In my gas-powered ride, I can go 150 plus miles before I have to stop for gas, and the roar of the engine keeps me company. On an electric bike, even if I could go that far, it would be whisper quiet. And without the infrastructure to support it, I’d have to stick to main roads. No more rides along US-50, the loneliest road in America.
Ten years ago, did we ever imagine motorcycles with the size of the engines we have now, or a “water cooled” Harley, or an on-board entertainment system that rivals a trans-oceanic 747?  Did we imagine the traffic and road conditions we have now, or the price of gas? And electric bikes?  Ten years from now will we be looking back on this decade and saying, “this is when motorcycling died”, or will it be a decade like the 90’s and early 2000s when the sport really took off? We can’t predict, but it will be interesting to look back.  But I don’t think gasoline powered V-Twin’s will go the way of the horse and buggy just yet – we’ll just be the antiques on the road.
One thing we can predict with certainty though is the legislative session.  It is something that obviously and annually affects the future of the sport for sure. The annual gathering in Olympia is set to start shortly after you get this issue. It’s a sixty day “short” session this year, starting on January 13th.  Because it’s a short session leading into an election year, it’s highly unlikely that anything major legislation will pass on things most riders care about. We will see bills on helmet use, and maybe even lane sharing/splitting. But the biggest issue facing the legislature in Washington this year will be dealing with the aftermath of Initiative 976 which blew a hole in the funding for road and transit projects. And while its constitutionality is being debated in the courts, the legislature will be trying to figure out how to maintain funding for road and transit projects in the event it will be upheld by the courts.
The hard reality is that there is too little funding for road projects because of declining gas tax revenue, and more and more vehicles on the roads causing wear and tear. The voters chose to save a few bucks on car tabs at the expense of road and transit projects, so unless something is done, the roads will continue to get worse, making our rides much less enjoyable and less safe. Figuring out how to pay for those repairs is not a task I envy our legislature.
But you can put your two cents in on those and other issues.  Remember the annual motorcycle day at the capitol, known as Black Thursday, is once again scheduled for Thursday January 16th. Sponsored by ABATE and is open to all riders.  It’s your day to meet your legislators and tell them what’s on your mind and remind them that you vote and your vote counts.  If you’ve not gone before I encourage you to go. It’s the best way to make sure your voice is heard.
Gary can be reached at roadsigns@comcast.net and you can read his blog at http://grgardner.livejournal.com or http://www.grgardner.com
Collapse