My June column for QuickThrottle magazine takes a look at Harley-Davidson's (and a couple of others) new electric motorcycle. You know I still can't quite wrap my head around an electric motorcycle -- but after having a chat with my friend Michael Roach who owns Palm Springs Harley, I've started to re-examine my prejuduce. Just a little. 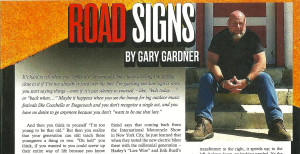 It’s hard to tell when you “officially” become old, but I have a feeling I’m getting close to it if I’ve not already crossed over the line. I’m guessing one sure sign is when you start saying things – even if it’s just silently to yourself – like; “kids today…” or “back when…” Maybe it happens when you see the lineup for big outdoor music festivals like Coachella or Stagecoach and you don’t recognize a single act, and you have no desire to go anymore because you don’t “want to be out that late.”
And then you think to yourself “I’m too young to be that old.” But then you realize that your generation can still teach these youngsters a thing or two. “Oh hell” you think, if you wanted to you could screw up their entire way of life because you know how to do something they don’t. My school teacher friends say they aren’t teaching analog clock reading anymore – you know like a non-digital round clock with numbers and hands. Nor are they teaching cursive writing. Do a Google search online for videos of kids trying to use a rotary phone, or even using a wire line phone these days. They don’t teach typing – it’s now “keyboarding” and they start in first grade. There’s a post going around on social media that says something along the lines of “we could cripple this entire generation if we all started writing in cursive and every car was a stick shift.”  It’s actually kind of funny and there is more than a glimmer of truth in it.
Yeah our world – by that I mean those of us who are in the age 50 and up category – is changing. Golf as a recreation activity is declining significantly. And so is motorcycling. Just ask your Harley dealer. Sales are down across the board, and new younger riders are not entering the market in any great numbers. How to deal with it has had the industry perplexed for years. Harley seems to have a fairly good handle on it -- going with darker and edgier bikes aimed at the younger demographic. And now they have the new electric motorcycle as well that is supposed to appeal to that generation and folks my age who are “environmentally conscious” and drive a Prius. I admit I have laughed and pooh-poohed the idea of electric motorcycles since they were first announced, but after having a long talk with a friend who owns a dealership, I see that there may actually be something to this.
Remember that social media meme about being able to cripple a generation if we all had manual transmissions? Well my dealer friend says that coming back from the International Motorcycle Show in New York City, he just learned that when they tested the new electric bikes there with the millennial generation – Harley’s “Live Wire” and Erik Buell’s new “Fuel” (even though it doesn’t use any) or the “Zero” SR/F among the few on the market – the hipster kids came back and said “that was fun! I could see myself riding one.” And the biggest reason given? They didn’t have to shift! Apparently the thought of shifting a manual transmission frightens them and keeps them from wanting to take up riding in the first place. 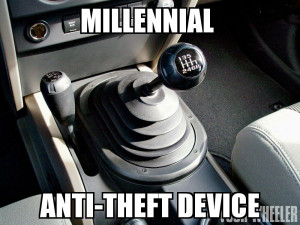 Admittedly I rolled my eyes with a “you’ve got to be kidding” look and my dealer buddy said, “No it’s true – they are afraid to shift!”.  So, he bought his girlfriend one and with some planning they can take reasonably short half-day and longer loop trips if they scope out charging stations first – they can with care, get 100 miles on a charge. He tells me it’s just “twist and go” and it’s kinda like riding an amusement park ride with the quick take-off and rapid acceleration. And to deaccelerate (or slow down), you just twist it the other way and the electric motor slows you down. Think about your old toy electric train when you were a kid – move the throttle on the transformer to the right it speeds up, to the left it slows down, no breaking needed. It’s the same concept with an electric motorcycle.

Admittedly it sounds fun. (I can’t believe I just wrote that but yeah it does.) I’ll keep my eyes peeled for a demo ride one of these days. I don’t know if I’d want to plan a long cross-country road trip on one – going only where there are chargers which is not likely the places I’d want to go along lonely back roads in the middle of nowhere. But for zipping around town it might actually be fun.  But more importantly if it keeps the motorcycle industry alive, that’s even better. If giving up the joy of shifting gears – of rolling off the throttle a bit and pulling in a clutch, kicking the shifter, letting the clutch out and rolling on the throttle again goes the way of cursive writing and analog clocks in order to keep motorcycling alive, well so be it. I don’t think there’s anything that can save golf in the long run, but maybe motorcycling can survive.
Kids in the future may very well never know the joy and fun of shifting their way down the highway at just the right moment to get a little extra “oomph”, or the roar of a gas-powered V-twin in their ears. But they’ll still know the rush of wind in their face and the open road ahead. But the streets of Sturgis, in August will be a lot quieter, save for all us old farts shaking our heads and saying “back when I was a kid…”