Yesterday marked the start of the Washington State Legislature's 2019 session -- and the fifth session since I retired and am no longer wandering the halls of Olympia. About the time I would have been heading off with all my colleagues and friends to the opening day "Third House" reception (the association of lobbyists), I was sitting in my new office at the Desert Hot Springs City Hall on my first day of "open office" hours in my new role as a member of the City Council. I'm enjoying the new role quite a bit -- and sitting across the table from my old job. 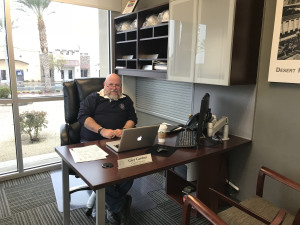 In the mean time, my January column focuses on what's going on for motorcycle riders in the halls of the state capitols of Washington and Oregon...

Happy New Year and welcome to 2019. The beginning of the year always heralds new goals, new wishes, new dreams. It also hails new legislatures. Yep, it’s that time of year again, when the folks we elect to govern us and make laws descend on the state capitol for the annual legislative session.  This year the session in Washington starts on January 14th, and will run 105 days, or so – till sometime in April if all goes well.
This is the “long” session year, and there are a lot of new faces in this legislature, and a number of old-timers have retired. What this will mean to the riding community still remains to be seen, but there are a few more positive signs than there have been in the past decade or so, which could signal some real progress on issues that concern we as riders.
Probably the most significant change is that of the chairman of the House Transportation Committee. Long-time chairman Rep. Judy Clibborn did not seek re-election this last year and retired. Rep. Clibborn, while generally supportive of overall motorcycle and road issues, was not supportive of helmet repeal or limitations, or of lane splitting – two issues that resonate with most of the riders and would fall on their wish-lists.  Replacing her will be Rep. Jake Fey of Tacoma. He was the vice-chair of Transportation. It’s not entirely clear where he will land on the spectrum of support for those two issues, but it’s never too early to start educating him and convincing him to move in those directions.
Over on the Senate side, the Senate Transportation Committee remains chaired by Senator Steve Hobbs of Lake Stevens. Senator Hobbs has not been supportive of helmet law modifications or of lane splitting in the past. Despite his opposition, there still is a better chance this year than in years past of getting some traction and movement on these issues.
The reason for that is that already several bills have been “pre-filed”, for introduction when the session starts. Among those pre-filed bills are SB 2007 from Senator Chirstine Rolfes, of Baindbridge Island.  The bill would eliminate the requirement of a rider to purcahse liability insurance if one is wearing a helmet and requires a helmet if the rider is under age 21. In other words, if one wears a helmet one not need buy liability insurance, if one chooses to ride without a helmet you must have liability insurance.  This is a novel take on the helmet debate, one that I don’t recall seeing before and might actually have some traction – particularly since Senator Rolfes is the chair of the Ways and Means Committee which oversees the state budget – and she could use this as a way to trade votes and get support from members who might not otherwise support a helmet modification bill.
And along a similar vein, Rep. Laurie Jenkins of Tacoma pre-filed HB 1014 which would eliminate the liability insurance requirement entirely for motorcycle riders. Rep.  Jenkins is the chair of the House Judiciary Committee and as such pulls significant weight in the House. Again, we have an opportunity for some horse trading of votes in this case, which could give this a greater chance of passage than in previous years.
And these are just two pre-filed bills – who knows what will happen once the session gets rolling in earnest in January. On average there’s usually a couple of thousand bills filed in the course of the session, and who knows what other issues might come forward that will affect riders in the Northwest.
Which is why it’s very important for you to attend if you can, the annual “Black Thursday” motorcycle lobbying day at the Capitol that is sponsored by ABATE and other motorcycle clubs.  Black Thursday is the key event for those interested in influencing policy at the state level. If you’ve never gone it’s a great event – an opportunity for you to get to know your legislators and make your concerns known when it comes to issues that affect us as riders. It’s early in the session, and a good time to get on the ground and let your elected officials know where you stand on key issues.
Black Thursday this year will be held on January 17th at the State Capitol in Olympia. You can find more details in ABATE of Washington’s ad in this issue. Suffice to say thought, it’s a good event, a great way for you to get to know your fellow riders, and perhaps even make a difference in the laws and policies that govern us in the Northwest when it comes to riding.
As I’ve said many times – elections have consequences. And as a result, laws can be changed for the better or the worse. If you want to make sure you voice gets heard, work with your motorcycle riding clubs and organizations, participate in Black Thursday, and keep in contact with your elected officials. It is the only way things will change.
Gary can be reached at roadsigns@comcast.net or www.grgardner.com, and you can read his blog at http://grgardner.livejournal.com
Collapse