Half way through October, and the heat's broken here in the desert -- with temps in the 80s for the most part! I haven't run the AC in a week!  Still talking politics in the column this month too.  Enjoy! 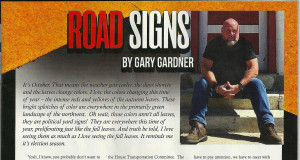 It’s October. That means the weather gets cooler, the days shorter, and the leaves change colors. I love the colors changing this time of year – the intense reds and yellows of the autumn leaves. These bright splotches of color are everywhere in the primarily green landscape of the northwest.  Oh wait, those colors aren’t all leaves, they are political yard signs!  They are everywhere this time of year, proliferating just like the fall leaves. And truth be told, I love seeing them as much as I love seeing the fall leaves. It reminds me it’s election season.

Yeah, I know, you probably don’t want to be reminded of that fact. You probably don’t need to if you watch TV at all. You can’t escape it, and when you want to escape it on your bike you can’t either because of all those darn yard signs everywhere right? But you should not – no, you must not ignore them. It’s crucial that we all pay attention to them. Not to each particular sign or ad or what not, but to the fact that it is election time. And it does matter to us -- as riders, as citizens, that we elect people who will reflect what concerns us when they are in Olympia, or Salem, or Washington DC or even our city and town halls making the decisions we elect them to make. Not paying attention has consequences.  Consequences that can be detrimental to what matters, or that can mean positive changes that we want.

The prime example in recent memory was the ballot question four years ago in Western Washington known as Sound Transit 3. It passed. You noticed because your plate renewals went up so high you almost need financing from a bank to pay for them. You also aren’t getting your money’s worth – especially if you live in Pierce County or Snohomish County. We could argue that even in King County you aren’t, but that’s a debate for another day.

This election year we have another important reason to pay attention to what – and who – is on the ballot, especially in Washington’s State legislative races. I think it’s safe to say that one of the most significant or important issues for us as riders is the helmet law. In past years our riders groups have tried over and over again to get it repealed, only to have that effort stall in the House Transportation Committee.  The Chair of that Committee is nor running for re-election this year, so next session there will be a brand-new chair of the Transportation Committee. It’s entirely possible that position could go to someone who is more supportive of modifying the helmet law than the previous chair who was adamantly opposed and wouldn’t even hear the bill. 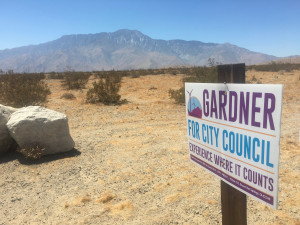 Now no one “runs” for Transportation Committee Chair – it’s given as a plumb to someone in the legislature that’s of the majority party. But, given the right mix of legislators elected this fall, that chairmanship could be given to someone who’s more in line with what us riders want. The only way to ensure that is to talk about it with whomever is running in your district. And trust me, they want to hear from you. They’ll be out doorbelling, or you may run into them campaigning at a grocery store on Saturday morning, or at a town-hall or community forum. Take a minute and talk to them, ask them about what concerns you. If it’s the helmet law, ask where they stand. If it’s car tab fees, ask about that. Just ask – and let them know how you feel. It will help you decide who to vote for, and it will help them see what’s important to you. If they say, “no way in hell will I ever vote for a helmet law repeal or modification”, well you know whether or not you should vote for them if that’s the most important thing on your list.

When your brakes squeal you fix them, when the motor makes a funny noise you work on it, when the gears grind you work on the transmission. When constituents make noise, policy makers listen, and they fix things. Make some noise! As the great African American civil rights leader Frederick Douglas said on his death bed to a young man asking how he could make a difference, the old man said “Agitate! Agitate!”   Well, you want to make a difference?  Agitate!

So, don’t ignore those colorful yard signs as you ride by trying to escape the real world for a few hours. Use them as a reminder to check in with your candidates and your elected officials on the ballot before the election and ask them questions. Tell them what you expect of them. Tell them what your priorities and concerns are. Then remember to vote.  Surely as the fall leaves change, elections happen, and policies and laws are changed too. And as the fall leaves disappear, so will the colorful yard signs – and your chance to make a difference if you don’t act.