Since 1990, when I moved to Seattle from Phoenix, whenever I drove home to Salt Lake I came in from the North. And whenever I came in on the bike it was always from either the North, or the East -- only a couple of times did I come in from the South. The road down from the Northwest -- across the mountains of Washington, across the Columbia and into Oregon and down into Idaho and the vast empty quarters of the Intermountain West, is one that became second nature, always stopping for a night or two in Boise to visit family. And while it was familiar it was still new. I'd find ways to wander off and see how things had changed or find new things. My Mom would complain that I was the only one that could take a 4 hour drive from Boise and turn it into a 9 hour one. But I like to wander, explore, and see. There's a song by the old 1960s folk singer Tom Paxton called "Bound for the Mountains and the Sea", where he sings " when I think of where I've been, I just have to go again, just to see if everything is still the same." That always defined my drive to Salt Lake.

Well now that home is in the Coachella Valley of the Southern California Desert, my drive back to the hometown means I come in from the South. And although I was just in Salt Lake a month ago, that time I again approached from the Northwest coming down from Seattle. Now I'm back again, and this time I came in from the South. And it struck me on the drive in, this is "new".  Well new to me for the most part. I've driven just about every road out of Salt Lake City in every direction, but this will   be the new "route home" -- coming up from the South. I have a few ways to wander and I'm sure I will, but this time it was just a straight shot on what will most likely become the "normal" route -- the back roads across the empty Mojave to Las Vegas, then up Interstate 15 to Salt Lake. 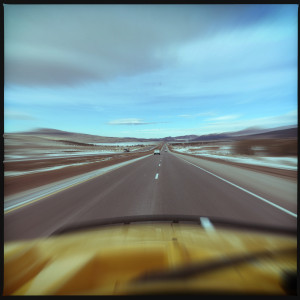 This is a significant change for me. Imagine your daily commute suddenly changed to the opposite direction. The familiar becomes unfamiliar - for a while. The old landmarks that mark your progress aren't there, and over time you develop new ones to take their place. I'll miss my drive down from the Northwest -- my favorite landmarks and ghosts I've photographed.  I'll miss the little abandoned truck stop cafe in Bliss, Idaho, my homesteaders cabin in the middle of nowhere, and Beth at Mollie's Cafe in Snowville, Utah.  http://grgardner.livejournal.com/2015/12/25/  But I know I'll go back someday -- to see if things are still the same, as Tom Paxton sang.

Just like the route down from the Northwest, this new road runs through a vast and empty land, starkly beautiful in it's own way. I love this part of the country and I always will. But approaching from the South brings up different navigational challenges too -- it's not quite "auto pilot" yet.  And unfortunately there isn't a good "half way" stop to spend the night or visit  relatives. I still need to figure out the best places to stop and stretch or gas up, get a bite, or what side roads to wander. And I'm sure I will. It's a lot closer to "home" now -- the drive not as long. As I age, and my parents age, the trip will become a little more frequent -- and no doubt, a little more familiar. But, I'm still a wander and I'll still be driven to see what I've already seen on this road home -- just to see if it's still the same.
Collapse