I've been back in Seattle a few days and my eyes are watery. It's cold. Can it be that after only three months in the desert that I've become acclimatized to the warm temperature of the desert? I'm cold. I've been cold the entire time I've been here. So cold that it sometimes makes my eyes water. I arrived in Portland in the midst of a snow and ice storm and temperatures in the 20s that pretty much paralyzed the city (and me), and then I drove on up to Seattle where it has hovered in the high 30s and has been damp and windy. I always used to tease with my Mom and others who would complain they could never get warm in Seattle. I'd be puzzled as to why, but I think I know now what they felt like. It's why Starbucks is so big here -- you have to have something warm in your hands all the time. I've been spending my time visiting with friends, doing some shopping, and picking up some new prints for the Salt Lake Show from my photo processor here.

Sunday night I took the new light rail system into the city to see the holiday concert for the Seattle Men's Chorus at the beautiful downtown music venue, Benaroya Hall. This was always such a big part of my holiday season all  the years I lived here. My former husband Tony was a major presence in the chorus, starting out as a singer, and then becoming part of the comedy troup and serving as a section leader and on the board and ultimately as the principle choreographer. The Chorus is an amazing arts organization -- one of the largest in Seattle -- and the largest Gay Men's chorus in the country. Their holiday concerts are the biggest draw in Seattle next to the Nutcracker. My family would come up from Salt Lake for the show each year, we'd get a group of friends too and all of us would go to dinner and walk around enjoying the holiday lights and Christmas season in downtown Seattle before the show, and then we'd go out for desert after. 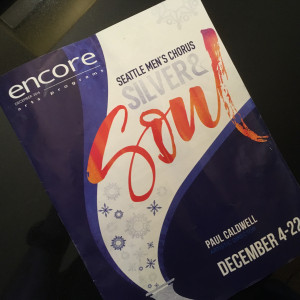 For all the years Tony and I were together SMC was a major part of my life. I made a lot of friends in the organization, and even accompanied them on tours of Europe and the Western U.S. where they performed in Barcelona, Paris, Amsterdam and London, as well as small towns throughout the mountain west like Pocatello, Idaho, Billings, Butte and Bozeman, Montana and my hometown of Salt Lake City. And it's much more than a group of men singing, and it's definitely NOT the Mormon Tabernacle Choir. There is much more to this organization.  To quote the artistic director: "The Chorus has cultivated a landscape in Seattle and all over that is made verdant by things that matter even more than music; community, activism, a sense of family, and, most importantly, the unbridled joy of being alive."

So going back to see the show was very emotional for me -- surprisingly so. It was wonderful to see so many friends, both audience members and singers, many of whom didn't know I had moved to the desert, hanging out in the lobby before and after the show, reconnecting with them, taking a ton of selfies and getting and giving lots of hugs. You get to be pretty close with people when you share a 6 person sleeping compartment on an overnight train across France, rush to a show carrying loads of props and costumes, hanging around backstage between concerts in a small town theater in Pocatello, Idaho, or feeding a dozen dancers who were reheasing in your living room. 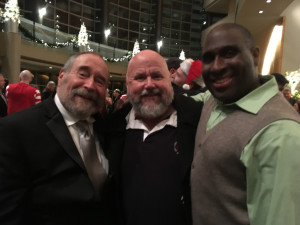 The power and beauty of the music and the 200 plus voices was so strong that I was more often than not misty eyed or crying -- or maybe it was just cold in the concert hall. I was very moved by the music and my memories of friends and my time as a part of the chorus family. The long time director has retired and this was the first show for their new artistic director and it was quite different, but still amazingly beautiful. The finale featured a solo by one of my dearest friends Ritch (who was also my realtor when I moved and someone I've known and loved for nearly 20 years). It was an African American gospel song called "Jesus, What A Wonderful Child" and Ritch who grew up in a black baptist church was, as they say, "back at church," with the audience clapping along, and all the time I had tears running down my face. 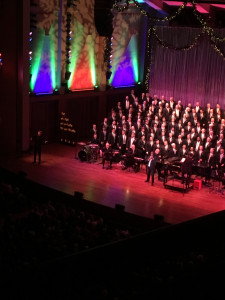 It's been interesting being back here in Seattle-- even after only three months. It now feels like a place I used to live. I've had a great time visiting friends and seeing the show and all. But it's now somewhere I used to live, much like Phoenix is. I didn't go "home."  Now it's where I have a lot of friends still, and it's a very familiar place, but its also somewhat distant and strange -- a place I used to live.

And it's cold. So cold my eyes are watery all the time.  At least that's what I'll blame it on anyway -- these watery eyes. The cold.
Collapse