Knowing that I was selling ths home in Seattle and moving to California and with all that entails, I figured I was pretty smart writing four months worth of columns back in July thus getting me to mid November before having to write another one. But I'm learning that unpacking and setting up a house takes probably three times as long as packing one up and moving. I'm going on almost three weeks since the furniture was delivered and I've just barely got the kitchen, bedroom, and some of the living room and my office in a semi-workable and liveable condition. I would have gone nuts trying to write during all that too -- which I why I've not written much here either, but there's more to come - as our President-Elect would say -- "believe me." (As an aside, Ayn Rand once said "If you have to tell someone to "believe you", should they really?")

Well this is the last one I wrote, and I now have to sit down (fortunately in my reasonably in-shape new office) and write another one for December. And so as I prepare to do that, it's time to post the November one... 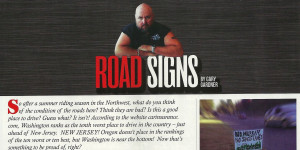 So after a summer riding season in the Northwest what do you think of the condition of the roads here? Think they are bad? Is this a good place to drive? Guess what – it isn’t! According to the website carinsurance.com, Washington ranks as the tenth worst place to drive in the country – just ahead of New Jersey.  NEW JERSEY!!!  Oregon doesn’t place in the rankings of the ten worst or ten best, but Washington is near the bottom!  Now that’s something to be proud of right?

The rankings are based on the following factors: the percent of roads in poor or mediocre condition; the percent of bridges that are deemed structurally deficient; the estimated cost of car repair due to driving on bad roads; and the average price of gas, and the percent of that price paid as gas tax. Washington now has the second highest gas tax in the nation, right behind Pennsylvania, which ironically falls just ahead of Washington in the ranking of bad roads! Think there might be a connection there?  The two highest gas tax states are also two of the states that are the worst to drive in. How ironic is that?

Who’s on top you ask?  Our neighbor to the southeast and my home state of Utah ranks as being the best place to drive in the Country. Anyone who’s driven or ridden in that beautiful state can attest to that, as well as their wonderfully cheap gas!  After Utah its Minnesota, New Hampshire, Virginia, Vermont, Indiana, Iowa, Maine, Nevada, and North Carolina. Joining Washington, New Jersey, and Pennsylvania at the bottom of the dung heap are: Rhode Island, Michigan, Mississippi, Wisconsin, Louisiana, Oklahoma and California as dead last. As someone who spends half a year in California, I don’t get that – the roads I ride here are far far worse than those I ride in California.

And they keep getting worse here. In my own neighborhood the city has taken the only major North/South arterial which was once a four lane road with a 35mph speed limit, and for most of it has reduced it to two lanes, added bike lanes and a left turn lane, and reduced the speed limit to 30mph. It has increased travel times and ironically increased greenhouse gas emissions as a result of slower traffic idling longer.  In moving those lanes they didn’t repave, they just restriped – so guess what?  The divots and tracks and worn spots are now in the wrong spot. As a biker it’s nearly impossible to drive a straight line on this road and avoid any road damage. The city is set to do the next three mile stretch of this arterial this fall, and it has resulted in local residents making home-made signs opposing Mayor Murray and reducing the lanes on this stretch. 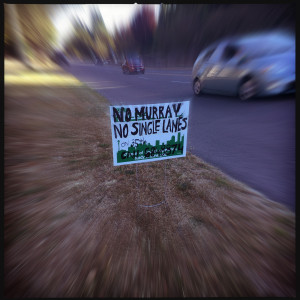 So do we just “chill out” as one of my readers wrote me to say I should do? “Gary, if you hate the roads so much here why don’t you just move, quit harping on it and chill out” they said a while back.  And hey, I hate writing about bad roads all the time about as much as I hate driving on them, I do.  Earlier this summer I hit one of those odd bumps in the pavement in Seattle where asphalt meets concrete and the Seattle DOT had done a very poor patch job that left a lip of about 2 inches of concrete above the pavement, and I bent a rim when I hit it. So yeah, I don’t think “chilling out” is a viable option.

The state is, in theory responsible for paying out damage claims caused by road damage such as chuckholes and uneven paving. Though judging from the statistics the chance of getting paid out is slim.  Last year in King County, there were only 14 payouts on 120 claims. That’s about 11% of claims being paid, and I’m surprised at how few claims there were too. Despite those less than Vegas odds of getting paid for the damage, I decided to file a claim with the state Department of Enterprise Services.  I filled out their form, sent them a description of what happened, a copy of the invoice for a new rim and tire, and photo of the bent rim and a photo of the pavement bump that caused it. It was mailed in mid July, and I’m not holding my breath for an answer.

But what if everyone who had pavement caused damage sent in a claim, no matter how small?  Would it wake them up a bit?  I don’t know, but the thought of an avalanche of claims and paperwork rolling across the offices in Olympia is a wonderful revenge scenario to think about. Would it do any good?  Probably not. The only thing that will change this is a change in the overall philosophy of what roads are for and why we have them. That means voting for politicians who aren’t anti roads and cars. Given the political climate in this state – well maybe it’s wishful thinking.

But to the reader who advised me to quit harping on the road situation here and either “chill out” or move or “shut up about it”, well, that’s not going to happen. I’ll continue to poke elected officials and policy makers and my readers to get involved and do something about this. Maybe one day it will happen. I’ll take my cue from the great Frederick Douglass, the brilliant African American statesman, civil rights advocate, and anti-slavery voice, who, shortly before he died in 1895 was asked what advice he’d give to a young man who wanted to change things.  He replied “Agitate, agitate, agitate.”

So if you have damage resulting from the most expensive and worst roads in the country, file a claim with the State Department of Enterprise Services at http://www.des.wa.gov/services/Risk/claims/Pages/standardTortClaims.aspx. And file and file and file. Keep filing. Agitate!  Agitate! Agitate!