Although my official legal residence will now be California, I will still be writing for QuickThrottle Northwest about the biker world in Washington, Oregon, and Idaho, and will be spending the summers up there as well. Because of the move and all it entails I wrote this month's column a few months ago so I wouldn't have to be dealing with writing while on the road and and living out of suitcases and house hunting.  This month I do a little soul searching and self reflection on my impatient tendencies, and how they have been exacerbated by the horrific traffic in Seattle and Portland -- something I'm not missing here in the desert at all! 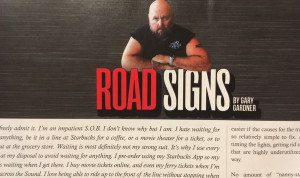 I freely admit it. I’m an impatient S.O.B. I don’t know why but I am. I hate waiting for anything, be it in a line at Starbucks for a coffee, or a movie theater for a ticket, or to checkout at the grocery store. Waiting is most definitely not my strong suit. It’s why I use every means at my disposal to avoid waiting for anything. I pre-order coffee using my Starbucks App so my drink is waiting when I get there. I buy movie tickets online, and even my ferry tickets when I’m riding across the sound. I love being able to ride up to the front of the line without stopping when getting on a state ferry. When I used to have clients and a home in Canada I got a Nexus pass to keep from having to stop and wait at the border. I have TSA Pre-Check and Global Entry to avoid security lines at the airport. I simply loath waiting in lines.

And I know my impatience and resulting frustration isn’t good for me. For a long time I was on high blood-pressure meds, but thankfully do to some significant health improvements and weight loss I don’t need them anymore. But my blood pressure was and is certainly aggravated by my impatient tendencies. I suppose I could be more like my Buddhist friends and just chill out and not let it get to me, but so far I’ve not been very successful at it. But usually I’m good at just resigning to my situation and sucking it up when I can’t do anything about it, (except bitch and moan to the conseternation of my friends within earshot) but give me a chance to do something about it – maybe even something foolish and there is a good chance I will!

But now my impatient tendencies are affecting me on the motorcycle, and I don’t like it. I’m finding myself taking more chances and doing some illegal or questionably legal things to get through this hellish traffic.  Back twenty-five years ago when I first moved to my home in West Seattle I could make the quick trip into downtown Seattle in fifteen to twenty minutes. Now days it takes forty to fifty minutes or longer.  I used to work in Redmond, and twenty years ago that drive was 30 minutes.  Now when I go to my dentist there I often joke that I should go over the night before and get a hotel room since the last two times it’s taken me two hours or more. It took me nearly six hours to drive to Portland a few weeks ago! Some of it is from increased volume yes, but most of it is from poor road planning and efforts to force – yes I said force – people into transit because if they make driving so miserable people will take transit.  You know long it’s been since we’ve built any new lanes of highways in this area? I don’t, but it’s not been in the 26 years I’ve lived here.

In the past I was – and maybe I still am – a little skeptical about lane splitting while on a bike, especially in fast moving traffic. But I’ve been done it in slow moving traffic – illegal as it may when I’m desperate to get somewhere. I know I’m not supposed to but if I didn’t I would have missed several doctors’ appointments. You’d think that a drive of 8 miles from one side of Seattle to the other shouldn’t take more than an hour. This isn’t Manhattan after all. In two instances I gave myself an hour to get from home to an appointment in the middle of the day. In both cases if I hadn’t done some things like lane splitting at intersections and passing where I shouldn’t, or traveling in a bus or bike lane for a few feet, treating stop signs like “yield” signs when its clear I can, and in one case cutting through a parking lot, I would have been significantly late for both appointments.  And yes I do see the irony of risky behavior in order to get to a health provider appointment.

There is no excuse for my behavior, and I know it was illegal – I know it was dangerous. But my point is that I don’t think I’m alone in this. I’m seeing other bikers take such risks, and even cars doing it. The traffic in Seattle has gotten so bad that people – myself included – are choosing to risk a ticket or worse to get through it. And while there is no excuse, there is a direct cause and effect from the bad traffic. I don’t know how to fix it. In myself I know I need to learn to just accept what is going on here and deal with it.  I suppose it would be easier if the causes for the traffic insanity weren’t so relatively simple to fix. Add some lanes, time the lights, get rid of bike and bus lanes that are highly underutilized would go a long way.

No amount of “nanny-state” nagging and lecturing about global warming and “driving nice” will change people’s minds on this either. It’s clear that the powers that be in the northwest have decreed that they don’t care about traffic, and they will not do anything to improve it save spend more for transit in the name of a greater societal good. We will not see any improvement in traffic flow with increased road capacity or smoother pavement here ever. And it’s going to get worse. I’ve come to accept that. Nothing short of a revolution, as Bernie Sanders would say, will change this. And like Bernie learned – it’s not going to happen unfortunately.

Maybe we can convince the legislature to allow for limited lane splitting in some cases – like at intersections or when traffic is stopped completely or allow motorcycles to travel in bus lanes, but I’m not hopeful. So for now, I’ll give myself 90 minutes to get anywhere in town and just chill at a Starbucks and read a book on my Kindle if the Gods smile on me and I get there early. I’ll try to schedule appointments in a tiny window from 11a to 1p when the traffic isn’t as stopped up as a baby with colic. When I go to Redmond to see my dentist I’ll book a hotel and go over around 9pm the night before and sleep in for a 10am appointment.  I’ll do my best to just relax and let it go – although in 54 years I’ve not had much luck with that. Maybe I’ll even learn to become a Buddhist and adopt some Buddhist ways.   Except for the vegetarian thing.  I know I can’t do that.

Gary can be reached at roadsigns@comcast.net or www.grgardner.com, and you can read his blog at http://grgardner.livejournal.com
Collapse