Taking a break from packing up my life and getting ready for the movers to come pick it up next Tuesday, I'll post my September column from QuickThrottle. Taking a look at the effects of legalization of weed in Washington and Oregon. With any luck I'll be all packed up in a few days and have a couple of days with friends to say goodbye to my home for the last 26 years.

I think one of the best sensory experiences while riding is that of smell. There is nothing quite so wonderful as the smell of riding through a forest and breathing in the fresh air, especially after a light rain. And then there is the smell of a fresh mown hay field out in the country on a summer’s day, or the salt water of the ocean along US-101 down the coast. Even the odor of a motorcycle engine is unique and to many of us as sweet as a flower. I don’t even mind riding past a dairy barn – sometimes.

And lately, unique I suppose to Washington and Oregon, I’ve been smelling something else as I’m riding along. Something we used to smell discretely (and not so discretely depending on our age and our circle of friends), but that I smell quite often now. It’s the smell of weed.  Marijuana. Pot. Have you noticed it?

I’m serious! It’s a rare day that I go out on the bike that I don’t catch a whiff of someone smoking weed as I’m riding along. It’s become more and more evident after the legalization of recreational marijuana in the Northwest it seems. People here are no longer hiding their use of cannabis. Not that they should either – I fully supported the legalization of marijuana. That being said, I have to ask should we worry about the amount of pot being smoked while people are driving or am I just imagining what I’m smelling?

During the debate over marijuana legalization there was a lot of talk about how it would or could impact driving, and how do we measure whether or not someone is impaired.  There are decades of studies for alcohol use and impaired driving, but none really on cannabis use. The Washington Institute for Public Policy won’t release their first Legislative mandated study on the effect of legalization until the fall of 2017, and it will look at increases in traffic accidents and deaths among other things.

The standard for measuring marijuana intoxication in Washington is 5-nanograms of THC per-milliliter of blood – no THC at all if you are under 18 years old. Some marijuana users say the standard under the new law is too low, and unfairly criminalizes people who use medical marijuana. But studies from the National Institute on Drug Abuse (NIDA) suggest the standard may be too high to capture drivers impaired by marijuana. The debate will rage on for sometime I expect as the effects of the new law are studied, and we won’t see any formal reports or studies until next fall. But there has been an uptick in highway deaths reported in Washington in which someone had THC in their system from 139 in 2008 to 183 in 2015. But the findings have been inconsistent in determining any direct link between driving while under the influence of marijuana and an increased risk of crashing. 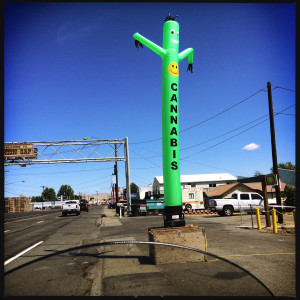 Common sense says too much pot will influence and impair the operation of a motorcycle or car just as too much alcohol does. Some groups have a zero tolerance for use of any intoxicating substances while riding. In my days as Lead Road Captain for Seattle HOG (Harley Owners Group) we had such a policy when it came to alcohol and in our pre-ride meetings we’d reinforce that. Since legalization, Seattle HOG has changed their pre-ride notice to say “the use of impairing substances which includes, but is not limited to, alcohol, and prescription or other recreational drugs that may adversely affect one’s judgment or ability to safely operate a motorcycle is prohibited.”

But what about those operating the cars and trucks we are riding among?  What about all that weed I’m smelling out on the road? Should we worry? The places where it is legal to smoke or consume marijuana in Washington is actually rather limited, but it seems many folks are ignoring this. It’s even more restrictive than drinking or smoking tobacco. You cannot smoke or consume cannabis: in public; in view of the general public; at the store where you bought it, hotels, restaurants; bars and clubs; stadiums; concert venues, or all federal land. Smoking while operating a car or even riding in a car is prohibited.  So why am I smelling it so much?

My best guess is that most folks assume it’s OK to use pot wherever one can smoke or drink (and remember you can’t drink in a car). Remember it’s not. Another reason I smell it so much is because in Seattle especially, the police, by ordinance, are required to make marijuana use enforcement the very last priority. In other words they can’t enforce the law.

All that being said, I still strongly support the legalization of cannabis. It’s amazing how it’s turned into a billion dollar business in just a year or so. The level of professional products and packaging, marketing, and retail outlets is impressive. It’s not something you buy in a sandwich bag from a grungy guy behind a dumpster anymore.  The state is making millions in needed revenue, and there are thousands of new jobs.  That’s all good.

Just remember, please, as you wouldn’t drink and drive, please don’t toke and drive or have a brownie or cookie or chocolate or whatever and drive – or ride. That old rule “puff, puff, pass” isn’t a rule of the road.