There’s something about a warm summer night. One can go outside for a walk and enjoy the evening air without a jacket. Late at night the traffic dies down -- most people are in bed or headed that way. The night is quiet and still. Here and there pockets of light from streetlights and still open businesses light up the darkness along mostly quiet streets on the fringe of the city. More often than not, nights can be lonely as well. Think of the well-known painting by Edward Hopper “Nighthawks”. It captures that sentiment and mood exactly, and perhaps that’s why I love the painting so much. It’s how I often feel roaming or riding the streets late at night. 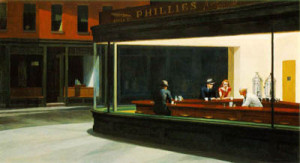 Ice cream is a weakness of mine, and there is nothing better than ice cream on a warm summer night. Sometimes when I’m in a roaming mood, or bored, or can't sleep, I’ll hop on my little bike Bandit and ride down to a local offbeat ice cream joint called Full Tilt, which has some amazingly unique and bizarre flavors. It’s in the neighborhood of White Center, which is the closest thing we have to a “hood” in this part of Seattle. To many people it can be kind of ratchet and seedy -- maybe even scary to some I suppose, but to me it’s just a neighborhood a little down on its luck, full of flavor and character and characters. It has “potential” and one day no doubt will be “discovered” and then infested by hipsters and gentrified.  But not yet. 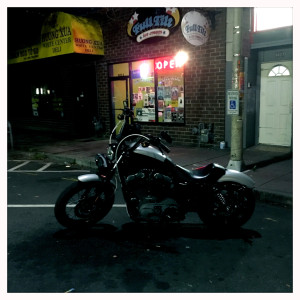 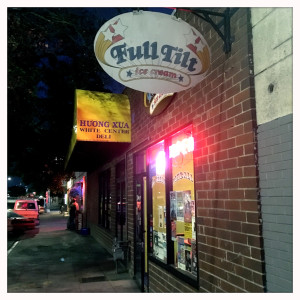 16th Avenue SW is the commercial strip, if you can call it that. Sort of the “Main Street” of White Center, which jokingly refers to itself as “not so white, not so centered.” It’s Seattle nickname is Rat City -- not as many would say, because of the rodents or the trashy residents, but because during WWII it was home to a military Relocation And Training Center – RAT. This three or four block stretch is faced with a number of 1920s era two story brick buildings – empty and occupied commercial space on the ground floors and small apartments upstairs. Most of the upstairs seem to be vacant judging from the many dark windows, but a few are clearly occupied -- lights on, the smell of food cooking coming out the open windows which are propped open with a box fan. 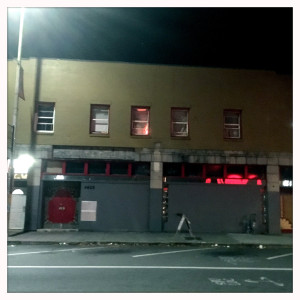 In addition to Full Tilt and it’s unusual ice cream selections like "Fruity Pebbles", "Vegan Chocolate" and "Bourbon Peach", the other store fronts tend to be tattoo shops, a great pizza joint, an even better burger place, a couple of stores of an adult entertainment nature, a barbershop or two, a legal aid office, a boxing gym, a couple of pawn shops, quite a few bars, and one single lonely little recreational marijuana store.

When Washington legalized recreational marijuana a few years ago, the enabling act had strict locational requirements setting minimum distances from churches, schools and the like. Most of the ones in Seattle are therefore in industrial areas, but a handful are allowed in areas like this. The effect of legalizing pot has brought it pretty much into the main stream. The stores I've visited are all clean, well lit, tastefully decorated, with helpful staff and stocked with a wide variety of professionally packaged products. The effect of “legitimizing” it has brought it out from the seedy underbelly of the world and made it quite normal. One no longer has to buy a dime Ziploc baggie of weed from a toothless unkempt guy next to a dumpster behind a Quik-E-Mart.  It kinda takes the taboo feeling out of it.

Except here. This sketchy little weed store – no name or sign on it, just an “open” sign under a green fluorescent light – with security bars on it’s frosted windows, housed underneath some darkened un-occupied apartments, and two doors down from an “adult” business, harkens back to the old days of buying a once illegal substance. It just feels seedy and somewhat illicit, and in many ways, lonely and sad. 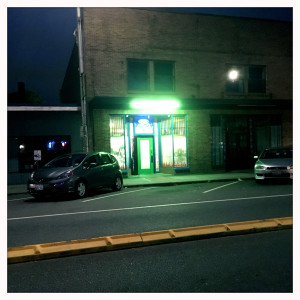 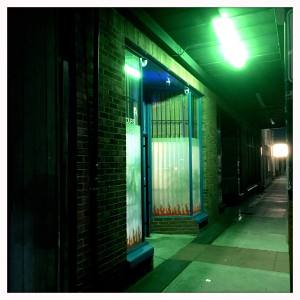 This is the modern equivalent in my mind of the Edward Hopper painting. A lonely, almost sad late-night clientele, in a dim building on a dark street under a solitary streetlamp, stopping by for a little dab before heading off down the road.

I found myself here the other night, sitting on Bandit, across the street from the weed store, eating a two-scoop bowl of Full-Tilt’s best (Thai Ice Tea and Cinnamon Toast Crunch). I was alone, but far from the only person on the street, even at 10:45 pm, just before the ice cream store closed. I had the smokers ducking out of the tavern down the block, and the vegan hippies stopping by the pizza place for a gluten free crust coconut milk cheese pie, not to mention the surprisingly numerous patrons of the weed store – most all of whom would fit the stereotype of someone who used to sell illicit MJ from similar darkened doorway, minus the green light and the “Open” sign. It was quiet on the street except for the occasional passing car and it's "thumpa thumpa" bass speakers, and in the distance from one of the second floor apartments came the sound of a woman perhaps imitating a cat in heat, I’m not sure, but she seemed to be enjoying whatever was going on. 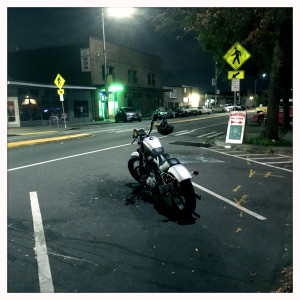 The ice cream store closes, the street gets darker as their lights go off. A guy in a dark BMW drops off one of his "girls", looking almost like central casting’s version of a pimp and hooker, she leans in the drivers window,  her minimal covering leaving nothing to hide, before she then scampers upstairs into one of the apartments. A few minutes later a too cute young gay boy couple park and get out hand-in-hand, hoping for some ice cream but just missing the closing hour. They wander into the weed store instead and emerge a few minutes later, arms around each other’s waists, and one holding a small bag in his hand. They smile and I nod at them as a kindred spirit -- they get into their car and drive away. I finish the last of my ice cream, toss the cup into the overflowing trashcan and fire up Bandit and drive off into the dark night myself.

This is life on the fringe of the city.
Collapse