When you are young the time seems to pass slowly, and the days seem to be years. As you get older it passes quickly -- too quickly --  and the days seem to be hours.  It's hard for me to believe that my time in the desert this winter is coming to an end. It seems like just yesterday I got here, and now it's time to head back home to the Northwest. It really sank in today when the transport company came to pick up Angus to ship him back home. Normally I'd drive home and then fly back in a few weeks and ride him up the coast and home, but time and funds don't allow for that this year unfortunately. As a biker it feels weird to be passing up on a multi-day road trip, and it makes me a bit sad. 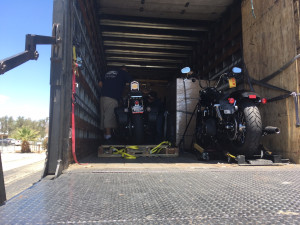 And truth be told I'm somewhat melancholy as my time here winds down this year. It feels in many ways like the ending of a good book. And I know I should be excited about starting a new book, and I guess I am -- yet I'm still feeling a bit blue.  My good friend Louis says "remember the good times, and look ahead, never look back", but then again Louis has always been a much more free-spirited guy than me. I tend to attach to places and people and feel sad when it's time to move on. You'd think being a roving biker who feels at home on the road that I'd not feel that way -- but I do.

And while this winter has been a bit of an emotional roller coaster as I've sorted things out, learned about myself and grown some, for the most part I had a wonderful season. I've made a lot of new friends and have some wonderful new people in my life. I had a part-time job just for the fun of it at Home Depot that I really enjoyed and will return to when I come back. 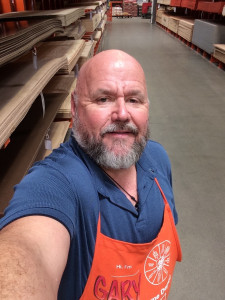 It was an experience going back into the workforce as a "worker-bee" rather than a boss, punching a time clock, and not being in charge, but I really enjoyed helping customers with projects and I met some great co-workers, and got a workout most days loading 90lb bags of cement and sheets of wallboard and lumber.

I experimented with printing my images using a new photo process, where images are "baked" at a high temperature onto sheets of metal, giving them an almost 3D look, and we've been showing them at the gallery here in Palm Springs as well as Portland, and have even sold a few. 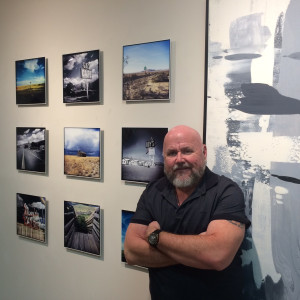 And I've made a lot of new acquaintances this year as well, and got the chance to broaden my horizons when a couple of them asked me to go to LA and play a small part in a web-based TV series that they do. It started out as an innocent conversation in a bar about voice-over work, and a few weeks later I got a call asking if I'd be interested in this part. So I took a weekend and went to West Hollywood, feeling a lot like a fish out of water as that is not my element (the very young, hip, gay crowd, not the TV production business which I'm very familiar with), and played a fun role in a their web series called "Pregame".  You can check out Season One online -- Season Two comes out soon, and I'm in an episode in Season Three which comes out in the fall http://www.pregamewebseries.com My role was that of the client of a personal fitness trainer who is rebuffed in his affection and goes a bit crazy/stalkerish.  It was a blast to play, and the creators, the very talented John Boatner (far right/maroon hat)  and V.A. Patrick Slade (next to me)  have asked if I'll come back in Season 4. 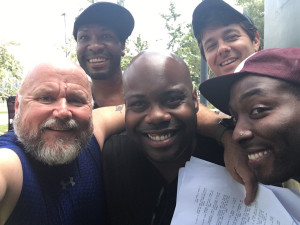 Perhaps the highlight of the winter though was playing softball in the Palm Springs Gay Softball League. I had some apprehension going to the initial open tryouts, thinking back to my one disastrous little-league baseball season in elementary school. But I did surprisingly well playing at catcher.  And although the team I was mostly comprised of newbies such as myself and as such we had a bit of a Charlie Brown season, we finished strong and won our final regular season game and our first play-off game, giving us 4-16 record and coming in 5th place out of 7 teams in our division. I was really proud of our little Charlie Brown team, that got steadily better as the season went on, and I think will continue to improve and I'm looking forward to playing again next season. 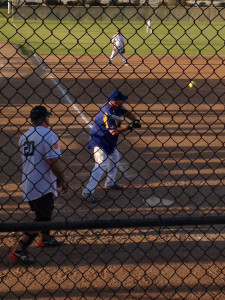 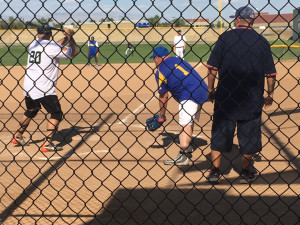 Yet somehow I still feel that as I'm moving on, that I'm closing some doors, and driving off into the sunset. I know I'll be back, this place is starting to feel very much like home, and there are people who draw me back. But I also know when I return to the desert that I won't be staying in the same place I've stayed the last two years, and that's the chapter that's ending for the most part. It makes me a bit sad, giving up on what I thought I had here with Danny, but realizing I never really had it to begin with.  Still I'll miss living in his house and his two dogs Kiki and Sammy, as this place has felt like my winter home for two years. And I also know that I'm not the same person I was when I got here. I've grown a lot emotionally, gotten a better handle of who I am and my sense of self is starting to come back. I'm a much stronger person, I didn't cut and run when things got bad as I've done in the past, and I've learned to let go. That sense of self is something you lose when a relationship evolves, when things change, or you end your career -- especially as young as I did, all of which seemed to happen to me at once. But I'm also more grounded I think too these days -- at least more so than when I got here.

Next Thursday I'll be Seattle bound again, taking some time to wander up the coast in the Hummer with a long-time friend from NYC who's coming out to enjoy the road trip with me. But in the morning when I get up, head to the gym, and look out at Mt San Jacinto rising above the desert, I get a little melancholy knowing that my view will be changing for a while. I'm moving on. Onwards and upwards -- I hope, but moving on. Yes.  It's time. 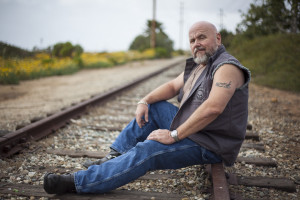