Well my time this winter in the desert is rapidly winding down. I plan on leaving to head back to Seattle three weeks from today on June 1. It's not been the best winter -- in fact it's been an emotionally rough ride on a nasty roller coaster -- but I've grown a lot, and have really been enjoying making new friends, working part-time at Home Depot, and playing softball, all of which will be tackled in a post later this month. This will be my last few weeks in this house, as next winter I won't be back here.  I'll be in Palm Springs yes, but not here, and I'm looking forward to getting back to Seattle and my friends and home there.  And since I just finished writing and sending off my June column for Quick Throttle, it's time to post the May one here.  It's a road story of sorts. When I first sent it to my publisher he said:  "All three black riders who read Quick Throttle will not be happy with you -- expect letters. But on the bright spot, at least you didn't piss off any of the other biker groups..."   And with that, I'll let you decide if this history of the road piece should piss anyone off...other than a couple of numbskulls in the Legislature. Oh, and so far, no letters... 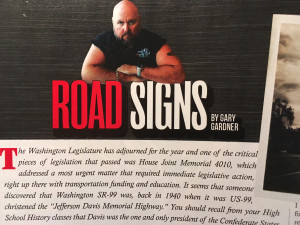 The Washington Legislature has adjourned for the year and one of the critical pieces of legislation that passed was House Joint Memorial 4010 which addressed a most urgent matter that required immediate legislative action -- right up there with transportation funding and education. It seems that someone discovered that Washington SR-99 was, back in 1940 when it was US-99, christened the “Jefferson Davis Memorial Highway”. You should recall from your High School History classes that Davis was the one and only president of the Confederate States of America. You know, the Civil War?

Naming highways is a long-standing tradition in this country – one of my favorites is the transcontinental US-6, which is named the “Grand Army Of The Republic” highway -- another Civil War reference. US-30 was once the Lincoln Highway.  US-1 down in the Florida Keys is known as the “Overseas Highway.” And of course California Highway 1 is known as the “Pacific Coast Highway,” and old US-66 is known, though not “officially” as “The Mother Road” after John Steinbeck’s “Grapes of Wrath.”  And apparently back in 1940 someone thought it was a good idea to name the old US-99 the “Jefferson Davis Memorial Highway.”

So the Legislature this year to address such a travesty of history in naming a highway after someone who lead the Confederacy, in it’s infinite wisdom, decided to rename what is now SR-99, the “William P Stewart” highway, after a black Civil War veteran from Snohomish County --although no one has called, and I can find no map references even in 1950s era maps to either US-99 or now SR-99 being referred to as the “Jefferson Davis Memorial Highway.”  It does strike me as odd that out here in the West we would christen a highway after the President of the Confederate States – I would have expected that somewhere in Mississippi or Georgia.  And at one time there were some markers to give notice and memorialize the Jefferson Davis Highway, in Blaine and Vancouver, WA, but they were taken down years ago. The Seattle Times said the old markers are now in a private park near Ridgefield, WA.  I guess I’ll have to ride there and check it out one day.

But as of the end of the Legislative Session, to address this evil violation of politically correct standards, and amend the wrong done in the first place by naming it after such a person, SR-99 is now henceforth and officially named the “William P. Stewart Highway.”  No word if they are planning any markers or memorials to Mr. Stewart or an explanation of who he is. In reality though Highway 99 is far more than the William Stewart Highway. There is so much more to its history than even being named after Jefferson Davis (and apperntly forgotten shortly after) and now renamed after someone else.  There is another story of this old road -- one that I’ve been contemplating here in my winter home of Palm Springs.

You see, I think I’ve figured out why most of Oregon and Washington’s “snowbirds” such as myself migrate to Palm Springs and the Desert Cities as opposed to other warm places like Phoenix.  It’s the history of US Highway 99 – or rather the old route of that highway.

In the pre-Interstate era, US-99 once ran from Blaine, Washington on the Canadian Border, all the way to Calexico, California on the Mexican Border.  It’s the main street through all the cities and towns along its former route – Bellingham, Everett, Seattle, Tacoma, Olympia, and Vancouver. It was Aurora Ave. in Seattle, and the waterfront viaduct. In fact you can still see an old US-99 sign at the viaduct entrance on Columbia Street in downtown Seattle. 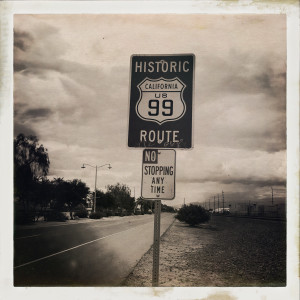 In Vancouver it crossed the river to Portland and headed on down South, splitting in Portland to US-99W and US-99E, which are today’s OR-99W and 99E through the Willamette Valley.  In California it was the main highway through the San Joaquin Valley, down past Sacramento, Fresno and Bakersfield. It went over the Grapevine and then down into LA and turned eastward to Glendale and up over San Gorgonio Pass and into Palm Springs. From there it went along the Western Shore of the Salton Sea and ended in Calexico on the border.  Once I-5 was finished the old highway was decommissioned and turned over to the states and left abandoned or its remnants as local or state highways.

I firmly believe this is the reason that when I go to Costco here in Palm Springs that the majority of license plates in the parking lot are from Washington and Oregon. Back in the 1940s and 1950s, when people started coming south in the winter, US-99 was the main road down from the Pacific Northwest.  It led to Palm Springs and the Coachella Valley. As generations of families vacationed and wintered to where US-99 brought them, the notion of Palm Springs became ingrained in the residents of the Northwest and passed down to family and friends over the generations, and now Palm Springs is the winter home for us mossbacks.

That my friends, is the real history of Highway 99. It’s history as a migratory route. The story isn't being named after the President of the Confederacy, or changed by the legislature in a fit of political correctness to a little known black soldier who fought for the Union. No, like US-66, the Mother Road of John Steinbeck that brought the dust-bowl Okies to California, and returning WWII soldiers on vacation to the West, Highway 99 brought the Pacific Northwest to the Desert.

And as such perhaps that is what should be memorialized.  California is marking its old major highways with signage acknowledging that fact, designating the remaining sections road as “Historic US-99”.  I’m glad to see someone – whether it was Washington DOT or another entity – has placed similar signage along Pacific Highway in Fife and elsewhere.  The old US highway system, in the pre-Interstate days is the real history and story of this highway. Thats what we should memorialize and remember.