Almost the middle of April, and I just finished my May column, so therefore it's time to post the April one... 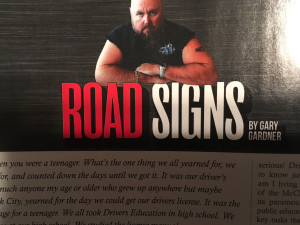 Think back to when you were a teenager. What’s the one thing we all yearned for, we all pined away for, and counted down the days until we got it. It was our driver’s license!  Pretty much anyone my age or older who grew up anywhere but maybe Chicago or New York City yearned for the day we could get our drivers license. It was the biggest right of passage for a teenager. We all took Drivers Education in High School. We practiced on the range at our high school. We studied the license manual. And we pestered our folks to let us practice in the family car.  I was lucky; my folks let me drive the few blocks from church to home on Sundays. And even though I’d been driving a motorcycle since I was 12, it was only on the dirt roads and trails in the forests of Utah that I got to get out on it and you didn't need a license for that. All my friends and me literally ached for the day we would get our licenses and be able to go out on the road.

But believe it or not, these days a fairly significant percentage of kids don’t even want to get their drivers license at all, while many are delaying getting their licenses. When I heard that I was stunned. I have a 16 year-old niece who lives in Boise, Idaho. When I was a kid in Utah we all wished like hell we could live in Idaho because you would get your learners permit at 14 and could drive at 15, whereas every other state it was 15 and 16. Idaho is still that way, and my niece doesn’t want to get her license. I thought this was just because she’s a little weird like everyone in my family is. But no, it’s apparently a big trend.

The Washington Department of Licensing spotted this trend and is alarmed by it. In the last 10 years the number of teens aged 15-17 applying for licenses has dropped steadily, while the number of people aged 18-21 has risen rather quickly. I would joke and say their alarm is caused because they aren’t getting any revenue from licenses but no; they have a bigger concern – accidents.  New drivers aged 18-21 are the riskiest drivers on the road, even more risky than newly licensed 16-17 year olds who make better drivers because they have just had Drivers Ed and are very cautious. (I’m not sure that statistic held true in my own case, but that’s another story). 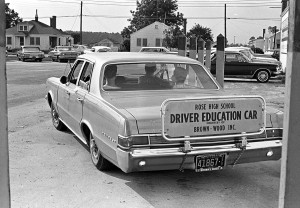 Washington doesn’t fund Drivers Education in High Schools anymore, but Oregon still does.  Washington stopped subsidizing DE classes in 2002. As of 2012 Seattle Public Schools doesn’t offer Drivers Education at all, meaning that kids in Seattle have to take a private course to the tune of $500 or more dollars.  But isn’t teaching kids to drive a paramount educational duty?  I’m serious! Driving is a basic skill that one needs to know just like the Three “R’s” right? Or am I living in the past?  Shouldn’t this be part of the McCleary case?  If the state is failing in its paramount duty to provide and fully fund public education, learning to drive is – to me anyway – one of those key tasks that should fall into this category. It’s dangerous not to. According to DOL, drivers who get their licenses at age 18 get three times as many moving violations as people who began driving at age 16, and are 24 percent more likely to be involved in a fatal wreck than those who get their license at age 16.

But aside from the safety factor, and the lackadaisical attitude about even wanting to drive at all, I think my biggest fear is that driving is seemingly going out of style, and we brainwashed kids into not wanting to drive.  “It’s ‘bad’ for the environment.” And we’ve made it so miserable to drive with roads that are in awful shape and nightmare traffic that they don’t want to drive, and we’ve made it so expensive they can’t afford to.  Saving and buying a car was another primary focus of our late teenage years back in the day. It was the first major purchase most of us made! Not any more I guess.
But then again, now that I think about it, do we really want them driving?  Holding their cell phones, texting and talking as they drive down the road and adding to the traffic.  Maybe it’s just as well they don’t I suppose. In any case, I’m rather saddened that the biggest right of passage I had as a young man – getting my drivers license – that “ticket to adulthood” -- is now kind of passé’ Getting an ORCA card and hopping on a bus or light rail train just isn’t the same.

Gary can be reached at roadsigns@comcast.net or www.grgardner.com, and you can read his blog at http://grgardner.livejournal.com
Collapse