It was sunny and warm in Bakersfield on Monday as I loaded up the bike for the final 200 mile ride back to the desert. This is a familiar route, as I've ridden it several times before, but I hadn't really explored Bakersfield at all, so I kind of wandered out of town on the old highway to see what might still be there before hitting CA-52 East and into the Tehachapi Mountains. The climb out of Bakersfield is a steep one, and starts rather suddenly after cruising past a lot of orchards and other fields, and a lot of oil wells. No wonder the Bakersfield High School mascott is the "Drillers". 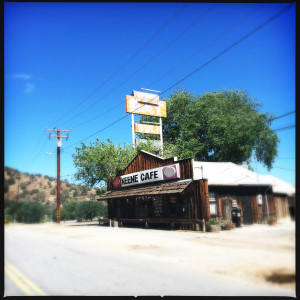 I exited off about half way up the grade in the town of Keene, and took the old original highway. This quiet two lane winds among the hills and follows the railroad tracks for much of it. The railway was built in the late 1870s an struggled up a 2% grade. In order to gain elevation in the confines of the canyon, a loop was built so that trains cross over themselves in the climb or descent. It looks like something in a model railroad layout rather than an actual railroad operation. The Techachapi loop is famous among train watchers and civil engineers and is considered a California historic landmark, and links the Central Valley with the Los Angeles area. I paused at a pull-out on the highway to admire the loop and hopefully watch a train curve up and over itself. 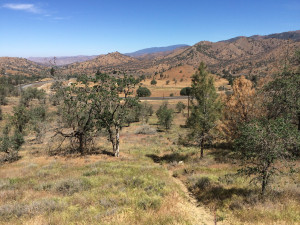 Alas after 45 minutes no train showed up, which is kind of surprising since there are an average of 40 trains a day through this pass. I climbed on the bike and started up hill and about a mile later saw the reason why -- there was track work going on and the line was blocked with track work equipment.  At the top of the pass and after the town of Tehachapi I got back on CA-52 which is essentially a freeway between Barstow and Bakersfield, with lots of truck traffic going between the high desert and the Central Valley. It's straight as an arrow once it leaves the canyon and heads across the Mojave Desert. I had to battle a bit of a headwind the whole way too which gets tiring after a few miles.

I was feeling hungry and so I exited off at the small town of Boron which is adjacent to a huge Borax mine. This little town is barely clinging to life, as it sits about 1/2 mile South of the freeway and tries to lure in travelers with some mining equipment and displays, Its hot, dusty and windy, but I rode past a nice old cafe and decided to cool off and have a bite at the 20 Mule Cafe. 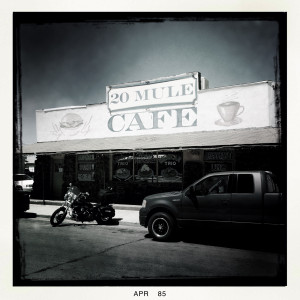 The food wasn't bad, but I had the place pretty much to myself other than a couple of locals. After lunch I continued East on CA-52 as far as Four Corners where US-395 crosses, and I turned South towards Victorville and Apple Valley. Ahead I could see the mountain range that I rode in a week ago with Foster and Vic along Angeles Crest. In Apple Valley I pulled up for gas and on the other side of the pump was a young woman with her son on a new Harley-Davidson Fat Boy bike, painted in Harley's "Desert Sand" color which gives it the look of desert painted army equipment. She asked if I was coming from Laughlin, where there was the annual Laughlin River Run biker weekend. I had forgotten about Laughlin and that explained the large number of bikers I saw heading West on CA-52. I told her no, I had spent the week riding on the coast and was headed home to Palm Springs. Her little boy asked about my bike and I let him sit on it with me before handing him back to mama and they rode off to get some donuts she said. Lucky little boy -- donuts and a Mom who rides.

The road continues on South East through Apple Valley and into Lucerne and Johnson Valley -- both areas that were homesteaded in the 1950s but unlike Wonder Valley further East, it seems a lot of these people stayed, even if their businesses didn't and the town of Lucerne is, like many in the high desert, barely clinging to life. 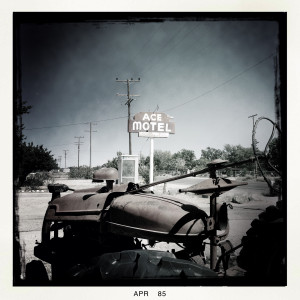 The remaining 70 miles to Palm Springs were old hat, and I cruised on in the late afternoon sun down CA-247, also known as "Old Woman Springs Road", into Yucca Valley then down into Palm Springs. It was finally back to being warm again. I think I had my jacket or a hoodie on the entire week I was gone. I pulled into the driveway about 330pm and the dogs were quite glad to see me after a week. Its nice to be back as well -- a week on the road gets somewhat tiring, but I know I'll be looking forward to another road trip soon, likely back to Seattle in a few weeks as I start the countdown to heading back to the Northwest at the end of May.
Collapse