Another cloudy and cool day on the central coast Thursday as I checked out of the hotel and loaded up the bike to drive over to my friend Louis' house in Lompoc. It's funny how you get used to sunny and 70s when you spend a lot of time in the Desert, and everything esle seems dark and cold. I parked the bike and ditched some of the luggage in Louis' apartment and we hopped into his Honda Accord and hit the highway for a drive up the coast, through San Luis Obispo, Big Sur and up to Monterey on CA-1.

Louis is a good friend who used to be the roommate of my friend Danny who I'm staying with this winter in Desert Hot Springs, and I've known him for a few years. Originally from Memphis, he's a big happy guy who loves to cook -- and eat -- good food. He's always on the prowl for good places to eat and has taken me to quite a few. He's worked at various casinos as a dealer as along as I've known him, and last fall he took a job at the big Chumash casino outside of Solvang, CA and moved from Danny's house in the desert over to Lompoc on the central coast. I've been looking forward to this trip and hanging with my old friend, who alas doesn't ride a motorcycle, but loves exploring the road as much as I do. He and I are much like the characters Miles and Jack in the movie SIdeways, which ironically was filmed near Solvang, CA where he lives now. In the movie, Miles -- a struggling writer (i.e. me), and his friend Jack, a struggling actor about to get married (i.e. Louis) venture off on a road trip to the wine country around Solvang. It's one of those great little "sleeper" movies that very few people saw, but that everyone who saw it loves it. Netflix it sometime. 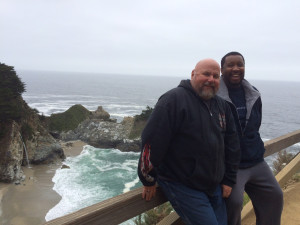 It felt very different sitting in the passenger seat of a car riding up the coast as opposed to riding a motorcycle solo, but as with any road trip I enjoyed it. This is about the last part of California that I've not seen or driven or ridden through, so it was nice to just be able to sit back and enjoy the ride. CA-1 is a wonderful road, in many places built along a cliff. It winds and twists and would have been a blast on the bike, albeit a lot of work and hard riding. 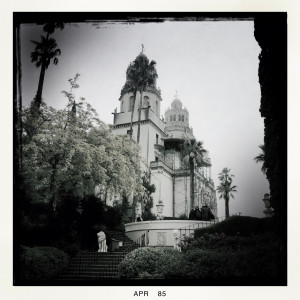 Our first stop was at Hearst Castle -- the grand estate of William Randolph Hearst, high on a hilltop above the town of San Simeon. This amazing place was one of the last, if not the last, grand estate built in this country in the gilded age. In its prime it must have really been something to visit and be hosted here. Its also very obvious that the house and grounds were the inspiration for Xanadu, the grand estate of Charles Foster Kane in Orson Wells' epic movie "Citizen Kane". 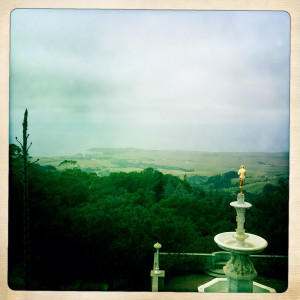 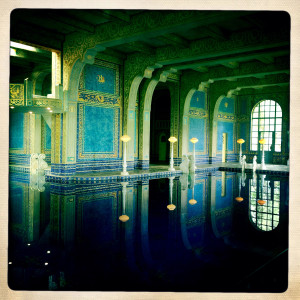 Because of the size of the place (and to get more money out of the visitor) -- 56 bedrooms, 61 bathrooms, 19 sitting rooms, a movie theater, two huge pools, two tennis courts, and 127 acres of gardens -- they have the tours broken into three or four segments. We only had time for one, but I would have loved to have spent the day taking all of the tours and seeing the entire estate.

After a bite to eat we hit the road again, headed North on CA-1 into Big Sur. This is one of the most isolated parts left in California, with very little population, and really only the two-late CA-1 as a road along it's edge. The mountains seem to rise straight up out of the sea, and there is no room for anyone to live or make a living. It's name comes from the original Spanish designation of "el pais grande del sur", or "the big country of the south". This is an amazing road from an engineering standpoint, and offers stunning vistas over the Pacific from high up along the mountain. It would have been a blast on the bike -- although a bit cool today, so it was nice to be contained inside Louis' car. 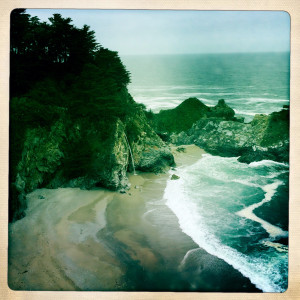 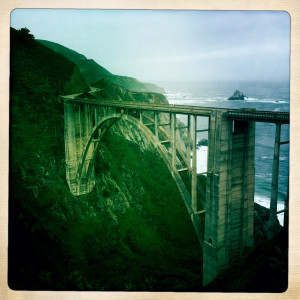 The "south" in the original Spanish designation of Big Sur referrs to the city of Monterey, and that is where we are staying for a couple of days of exploring before heading back to Lompoc on Saturday.
Collapse