Tuesday's ride turned into a lesson on California history in many ways, although I'm sure my riding companions didn't intend for it to be. Given my love of history, especially history of the road and of the early 20th century, it was an outstanding day, even if the weather wasn't ideal. Monday's clear sunny skies turned cloudy and cool as I woke up in Santa Clarita on Tuesday morning, and the weather stayed that way all day. There was rain in the area, but thankfully we were able to stay dry all day, although we all were bundled up with multiple layers on. One of the things I like about riding with Foster and Vic is that we are all a bit "Old School" riders -- no fancy GPS bikes with touch-screen entertainment. Just plain raw motorcycles. Vic met me at the hotel riding his Honda with the Grateful Dead logos and a plate that said "Dead 92" and we rode to meet Foster at our breakfast spot who showed up on "The Beast", his Harley-Davidson Softail Deuce. Our lesson in history started early, when Foster and Vic took me to the "Original Saugus Cafe" along Railroad Avenue in Santa Clarita for breakfast. This is an ancient joint -- a traditional diner, with counter and stools as well as booths. The menu said it was established in 1886, making it one of the oldest restaurants in California, and it's been in this building since the 1930s. There aren't many of these great old diners left these days, along what was old US-99. 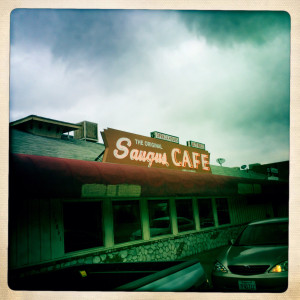 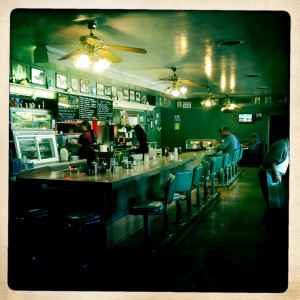 The booths were all full so we sat at the counter at the corner. After a hearty breakfast that only old diners like this can serve, we headed for the bikes only to find that Vic had a nail in his tire. Fortunately he lived only a couple of miles away and had another bike so we rode back to his house and swapped them out and headed out Northwest of Santa Clarita and up Sanfransquito Canyon, along a nice windy road past some ranches and horse farms. We pulled off the road as we climbed up to the top of a small hill, just past a very nice concrete Art Deco power plant and Vic pointed out the remains of a landslip that took out an old concrete dam. Back in 1924 William Mulholland, the famous engineer of much of the LA area water system built a big dam along the river here. The St. Francis dam was a cement dam and the reservoir was part of the LA water and power system. But in 1928 the dam collapsed suddenly at midnight one night without warning, sending a huge wall of water downstream, killing 600 people and flooding all the way to Ventura on the Pacific coast. The power plant we had passed was for another reservoir higher up that was built to replace the collapsed one. Vic said there were some concrete remnants of the dam just behind the hill we were on, but because the road had been relocated a few years ago after a fire we couldn't see them from where we were.

We hopped back on the bikes and continued on up and over the mountains, past Lake Elizabeth and Lake Hughes, both almost muddy salt flats now with the California drought, and paused for a cup of coffee and to warm up at the Rock Inn in the town of Lake Hughes. This cool structure is made entirely of rocks -- hence the name, and dates from 1927. Its served as a store, gas station, bar, post office and hotel, and still has rooms to rent as well as a bar and restaurant that has live music on the weekends and is generally packed with bikers from SoCal in the summer. But midweek in the early spring we had the place to ouselves except for a CalTrans crew on break and a couple of sport bikers. 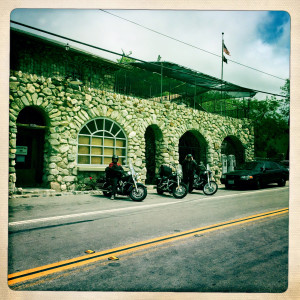 As we mounted up after our coffee break, Foster said he had a surprise for me up the road aways, knowing how I love abandoned places. We headed up the road and turned off on a narrow paved road marked "Pine Canyon Road". The way this road curved and wound around the hills and had no traffic at all -- we didn't pass a single car in 10 miles or more -- I thought that was my surprise as it was such a great ride, but no, he had something else in mind. We made a turn onto a very old road and came upon a sign that said "Old Ridge Route". This was my surprise, they wanted to take me to the ruins of an abandoned hotel up this road which was the first paved road from LA to Bakersfield and was part of the first alignment of US-99. What Foster and Vic didn't know is that the road was washed out about a mile up and we couldn't pass, and when we hit the washed out area they were very apologetic. But I was as equally fascinated about the history of this route as I would have been about the old ruins and just as thrilled to be there. It was amazing to stand on this original road, paved in concrete, winding along the hills, built for a 15mph speed limit, and imagine the travelers in their Model T's struggling along its grades and curves. This alignment was replaced in 1933, but until that time was the main North/South route from LA to the Central Valley. 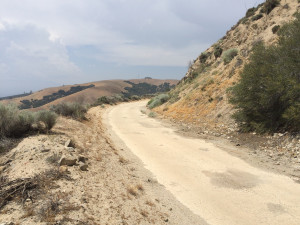 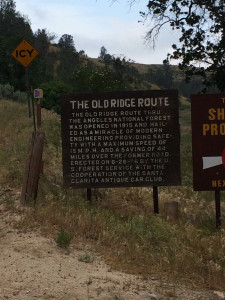 So we headed back South towards Santa Clarita before turning West on CA-150 heading towards the town of Ojai where we planned to stop for an early dinner, and where Foster and and Vic would head back home and I'd continue on towards the coast and my destination for the evening. We cruised along through the lush farms and vineyards of this part of California, through some charming towns like Filmore and Santa Paula, before dropping down into the Ojai Valley.  Ojai itself was a quaint little town, and unfortunately the first two places we stopped at for dinner weren't open -- the first we were too early for the kitchen, and the second had gone out of business. I asked a local where he would suggest and he pointed us to a nice Mexican place where we finished off the day with some great food and conversation. 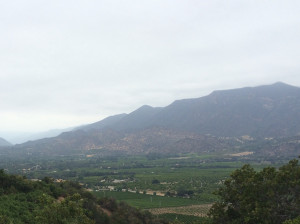 After dinner we said goodbye and I thanked them both for their hospitality and companionship these last two days and then Foster and Vic headed back South and I turned North on CA-150 and wound up out of the valley and headed towards the Pacific. Dropping down I could smell the ocean, and although it was cloudy, could see the oil rigs off the coast. I pulled into my hotel after having ridden a little over 150 miles, and traveled back in time and learned a lot more about California's history along the way.
Collapse