Half way through April already -- looking at a little over a month left here in Palm Springs before heading back home. Sitting down today working on my May column for the magazine, and posting the current one.... 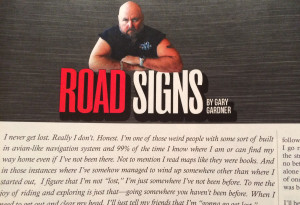 I never get lost. Really I don’t. Honest. I’m one of those weird people with some sort of built in avian-like navigation system and 99% of the time I know where I am or can find my way home even if I’ve not been there. Not to mention I read maps like they were books. And in those instances where I’ve somehow managed to wind up somewhere other than where I started out to I figure that I’m not “lost”, I’m just somewhere I’ve not been before. To me the joy of riding and exploring is just that – going somewhere you haven’t been before. When I need to get out and clear my head, I’ll just tell my friends that I’m “gonna go get lost.”

There is something exciting to me about riding down an unfamiliar road, or finding a road I didn’t know existed or heading down a road just to see where it goes. To me that defines the freedom that so many of us cite as the prime reason for why we ride.  It’s one of the reasons I refuse to ride with a GPS device, and ride only with my trusted Harley-Davidson Ride Atlas in my saddlebag. If I need to pull it out and look at it I will, but I’d rather wander about than follow the robotic voice of a GPS.

In fact, getting lost has resulted in some of the finest rides and experiences in my life. Last summer I had ridden from Seattle down to Salt Lake City for my Mother’s 79th birthday. I think I’ve ridden ever possible route from Puget Sound to the Great Salt Lake so many times I don’t even need to look at a map. But one of the more dreadful things on that route are the segments where one simply must ride the freeway, which in Idaho and Utah often have 80mph speed limits – especially the stretches South of Boise. Whenever I go home I really dislike this stretch because of that. I know every inch that I can drive and not have to drive I-84, and believe me I do. It’s why my Mother says I’m the only person she knows who can take a four-hour drive from Boise to Salt Lake and make it a ten-hour one.

This last trip on my way back up to Seattle, I had exited off at Glenn’s Ferry to take a back road that skirted far West of I-84 and ended up West of downtown Boise in Nampa. There is a funny little jog to the left in this road and if one isn’t careful, one misses the sign that shows the continuing Idaho state highway also jogs to the left rather than continue straight down the road in the line of sight. Well it had been a long day and I missed that turn. After a few miles I realized what I’d done, but by then I had noticed that the road was signed “Old US 30” – the former highway before I-84 was built. I figured it would eventually get me closer to Boise if nothing else and decided to stay on it. I wasn’t lost, I was just on a road I’d never been on!

Boy was I glad I did. Not only was it a very scenic road, it also took me along the Union Pacific Railroad’s mainline – watching trains go by is a favorite pastime – and into a couple of small towns I would have missed had I stayed on my intended route.  It also took me into downtown Mountain Home, ID, where I stumbled upon a great old Tastee-Freeze drive in, complete with a vanilla cone sign swirled up on top and picnic tables out front, and the perfect place to stop for dinner and to watch trains go by before hitting Boise for the night. As always I was glad I got lost. 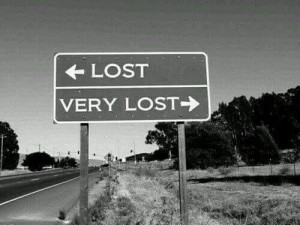 There are all kinds of ways to get lost; not just following roads you haven’t been on. Often I go riding just to lose track of time or to lose the stress that has been bothering me. There is no better way to get lost than on a motorcycle -- alone with one’s thoughts, clearing the cobwebs of one’s mind, and forgetting whatever it was that was bothering us.

I’ll head out down the road, put my feet up on the travel pegs, blank my mind and let it drift with the roar of the engine, the sound of the wind, and the smell of the water or the trees. I’ll lose track of time and distance. Once I realized when the low gas light came on that I’d ridden 150 miles and not even known it. Often I’ll write this column or a post on my blog in my head while I’m riding – jotting down notes in a small notebook I keep in my tank bra.

You never know what you’ll come across when you get lost. It might be a gorgeous quiet scenic spot, a forgotten diner with great food, or a set of twisties that you never knew were there before. Don’t be afraid to get lost. Embrace it, own it, revel in it, brag about it. It’s great to be able to tell yourself “wow, I never knew that’s where this road went!”  When someone says to me after reading a column I’ve written; “Gary get Lost!” I say: “gladly, thanks I will!”

Then I’ll throw a leg over the bike, hit the starter, and head out not knowing where I’m going, not caring where I end up, and looking forward to what I see on the way. It’s riding season. Head on out, and remember to tell yourself: “I’m not lost – I’m just somewhere I’ve not been before.”