Sometimes when I'm riding I'll listen to my I-Pod, leaving it on "shuffle" so it randomly picks songs to play from my entire library. The other day I think it gave me a sign. A sign that I should keep riding -- at least that's the excuse I'm using for spending the day wandering the high desert of Southern California on Monday. I had only intended to ride about 40 miles with my old friend and colleague Rich Busch, who was on his first major cross-country motorcycle trip, riding from San Diego back home to Seattle. I'd helped him map out a route, and he spent the first night in the Palm Springs area where we had dinner and caught up and talked about the trip. The original plan was to meet for breakfast and ride with him up to a turn-off in Yucca Valley that would point him towards the Northwest. However, after meeting him at his hotel then riding across the valley for breakfast then riding up to the turn-off in Yucca, it was such a nice day I figured "what the hell", I'll ride up to the NEXT turn-off in Victorville, CA and send him on his way there.

So after breakfast at a small joint in Desert Hot Springs we hit the road -- riding up through the Joshua Trees outside of Yucca, and across Johnson Valley along CA-247 and CA-13, through Lucerne Valley and on into Apple Valley and Victorville. At the junction for US-395 we pulled into a mini-mart and rested, chatted about the rest of the trip, and I sent him on his way North towards Bakersfield and up the Central Valley. He was hoping to make Sacramento that night.  I turned around and headed back, but just past a big airfield with hundreds of stored jet liners, my I-Pod randomly played "Ghost of Tom Joad" by Bruce Springsteen. At the same time I came upon a section of old US-66 -- the road the Joad family took to California fleeing the Oaklahoma dust bowl and that was the setting for much of John Stienbecks "Grapes of Wrath". Surely this was a sign that I should embark down this segment of the Mother Road. I mean, coming upon the intesection of Route 66 while the I-pod randomly plays Ghost of Tom Joad?  What else could it be but a sign? 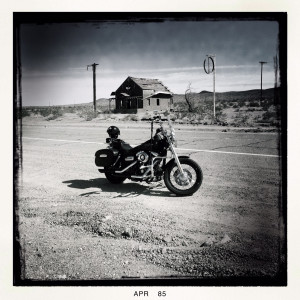 I have ridden probably 90% of the old road over the years, intentionally and accidentally. The stretch east of Barstow was one I rode in 2010, going as far as Kingman, AZ on what sections of it are still left. I'd ridden from Kingman to Flagstaff back in 2007 on the way home from a trip to Las Vegas, and at the last minute during that 2010 trip after riding to Phoenix and Tuscon and back North, wandering with no destination in mind, I decided in Gallup, New Mexico to ride the old road as far as Tucumcari, NM.  Then laying in bed in a wonderful neon lit restored vintage motel in Tucumcari, I decided to ride as far as Oklahoma City.  Two days later in OKC I decided, "what the hell, might as well finish it" which I did, and rode on to Chicago. But this stretch from Victorville East is one I hadn't ridden, and I've still not done anything West of Victorville (although it's mostly city riding in the LA area).

So I heeded the I-Pod's omen and turned East on "Historic Route 66 - National Trails Highway" as it was signed -- and officially is San Bernadino County Route 66. This easy, nicely graded section, ran through some farms and along the old Santa Fe Railway mainline -- now BNSF's Southern Transcon Route. I enjoyed the mild temperatures and the scenery -- wishing I was born 20 years earlier and had a chance to ride the road in its heyday. 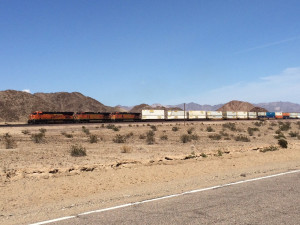 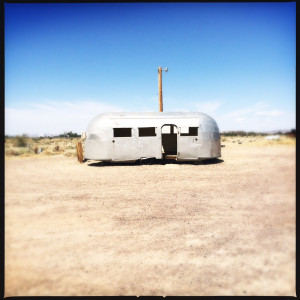 Some 35 miles up the road I pulled into Barstow, riding up Main Street and looking for signs and ghosts along the way. I stopped at a little mexican joint for some lunch and decided rather than turn south at Barstow and head back to Yucca Valley on CA-247, I'd keep going on Old 66 as far as Amboy before heading South and back West again through Wonder Valley and into Palm Springs, making a full day of it.

So after lunch I headed out, finding those stretches that still existed East of Barstow, pretty much paralleling I-40 -- through the towns of Newberry Springs and Ludlow, before the old road took a turn South away from the Interstate and headed across the desert to Amboy.  Here and there a few ghosts still haunted the old road, and I was in almost constant company of a parade of endless Westbound BNSF trains. The sun was out, the temperature mild, and I was on the Mother Road. What more could a wandering biker want? 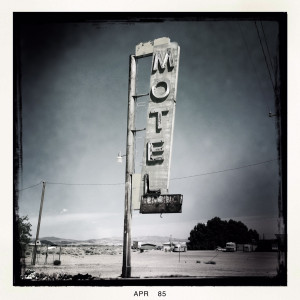 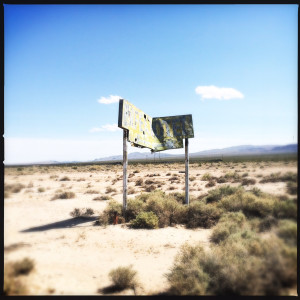 I turned off the old highway in Amboy -- one of my favorite ghosts to photograph, and headed back over Sheeps Pass and down into Wonder Valley. I finally rode into the driveway in Desert Hot Springs about 6pm, having left at 7am and ridden a circle of 347 miles.  Sometimes I guess it pays to listen to the "signs" one gets on one's I-pod.
Collapse