Sometimes you just need to let go and walk away -- lest you blow up and do something you might regret. To be honest, emotionally sometimes I'm still in a very weird space, not sure of what I'm doing, where I am, and where my life is headed. This "pre-tirement" thing is interesting -- a combination of finding something to define my life now, earning money and finding happiness and maybe someone to share my life with again. Sometimes I'm bored out of my skull and sometimes I'm as busy as I was when I was in the middle of a legislative session. Sometimes I'm excited as a kid at Christmas, and sometimes I'm sad and lonely and missing my friends in Seattle. The emotions build up and you don't realize it. In the middle of all of this, I'm attempting to re-house train a couple of dogs that belong to my friend Danny, with whom I'm spending the winter here in the Desert. He has a couple of very cute nice dogs, Kiki and Sammy, but due to a number of circumstances over the last year or so, became "outdoor" dogs and thus forgetting their house-training. When I got here this winter it became a goal of ours to re-housetrain the dogs. It has not been easy.

We've tried everything from crate training, to rewards, to constant monitoring, to even doggie diapers and a combination of all of them.  Just when it appears they are getting the hang of it, they pee -- and in the worst places they can.  It's frustrating and maddening. The other morning after I got back from the gym, the dogs and I did our little "outside!  go potty!" routine (making me feel like Abeline trying to get Miss May Mobley to go potty in the movie "The Help"..."cummon, go and I'll give you a treat..")  We played fetch in the yard and had a nice time while I relaxed after working out. I came in and put them both in their diapers and got in the shower. After I got out and went into the bedroom to get dressed, I sat down on the bed, the dogs jumped up and as I was putting on my socks, one decided to pee in the middle of the bed while still in her diaper leaving a huge puddle on the bed, while the other decided to lift his leg on the dining room chair and pee through the diaper, and after having just gone not more than 15 mintues before outside! I exploded. I yelled, pulled the comforter off and ran it to the laundry room in a rage. Ever try to jam a king sized comforter into a washing machine? My anger scared the dogs pretty bad, and I rushed them outside and took a deep breath. All the frustration at them and everything else flooded me and the anger and rage took over. I needed to get out.

As everyone knows I love dogs, and I miss having them in my life -- which is one of the nice things about staying here. I've come to love these dogs, and they love me, but right now I was ready to drop kick them through a goal post. I hate being mad at them. To avoid doing that I got dressed, texted Danny that I was going for a ride to cool off, and to please put the comforter in the dryer and the sheets in the wash when he got home from work as I didn't know when I'd get home.  I let the dogs in, and they knew I was still upset, and they ran into their kennel, confused no doubt as to why "nice" uncle Gary suddenly became a raging green Hulk character. I shut the door and headed for the bike.

I was low on gas so the first stop was a gas station, and by then Danny had texted me back asking if I was OK and where I was. I said "no, but I'll be OK, going for a ride, likely up to Morongo Basin." He said he'd take care of the laundry, but had a dinner function at work and would head back out and be late getting home. I headed up Indian Canyon Road to CA-62 and climbed up to the Morongo Basin and the string of towns up there -- Morongo Valley, Yucca Valley, Joshua Tree and Twentynine Palms. It's about 2000 feet higher than the Coachella Valley and so consequently it's cooler -- much cooler. I only had on a sleeveless t-shirt and started to feel the wind chill. It is still only April, and while it may be 90 in Palm Springs, it's 65 up there. I stopped for a drink at a Sonic drive in and put on my hoody. I was still mad -- even shaking -- from earlier, and knew I needed more time to cool off, so I decided to ride out on CA-62 and go around the mountains and back to Palm Springs. I'd never gone past Twentynine Palms on CA-62 and so it would be new road for me.  Being a guy who reads maps like a book I remembered from the map in my head that it went East and then curved a bit Southeast, and met up with another CA state road which would head South and take me past Eagle Mountain and on to Desert Center where I could pick up I-10 and head back West to Palm Springs. What I didn't remember was exactly how far it was -- and on the map in my head it didn't look that far. After Twentynine Palms the land become very very desolate -- and there is a sign saying "next gas 100 miles" which would be on the Colorado River at Parker. It did not give me miles to I-10 because most folks going that way don't head South to I-10. The tank showed I had 120 miles and I knew I could make it to Chirico Summit on my route and be fine, so I kept going. This section of the Morongo Basin is where a lot of those old homesteads that I photographed last year in Wonder Valley are located -- the last place in the US where one could homestead for free land in the 1950s. There are hundreds of these old homesteads -- now abandoned -- scattered all over this lonely forgotten corner of the desert, and naturally I spent some time shooting photos in the late afternoon sunlight.

The road continued East into the desert, the sun started to get lower and lower, and I was soon chasing my shadow up the road. I was alone on the highway, just me and the bike and the noise from the engine. I started to relax and let go of the anger and the frustration that had been building up and that was triggered by the dogs. The vast emptiness of the Desert, with the moon rising in the East with the wind rushing at me as I roared down the highway blew my mind clear and I relaxed, the blood pressure dropped, the muscles unclenched, and I stopped the bike to just look around and listen to the quiet. The anger wafted away, and things became right again. 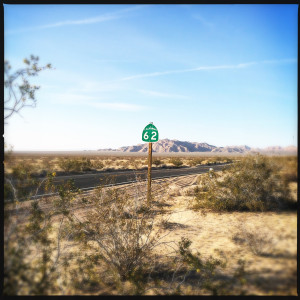 I couldn't solve my problems, answer the questions running in my head that had been building up, or figure out how in the hell to get these dogs re-house trained. But I was no longer tense, angry and frustrated -- just kinda sad and melancholy.  I was however, still about 100 miles from home -- in the desert with no cell service, and the sun was going down. I figured I needed to get going, and so I threw a leg back over the bike and headed off.  The road was still empty, and like I said, I underestimated the distance, and it was getting dark by the time I finally got to the virtual ghost town of Desert Center and my favorite abandoned gas station. The moon was full and it lit up the Desert. 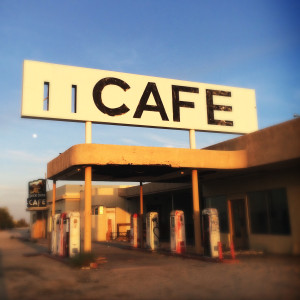 I could hear the roar of the traffic on I-10 as I sat there on the bike enjoying the night air. A text from Danny wondering where I was made me realize how late it was so I headed up the onramp and turned West towards the Coachella Valley. The low gas light came on after I passed Chirico Summit and it's gas station, and I started to worry as I coasted down the hill towards the lights of the Valley, but I made it to my exit and stopped to get gas, with less than five miles of fuel showing on the tank. The last twenty miles home on Dillon Road were nice, and by the time I pulled into the garage I'd gone 209 miles. I hadn't intended to go that far, and it took the better part of those miles to release all that pent up anger and frustration, but it worked.

I came in and accepted an apology from Kiki and Sammy who  jumped up and gave me some doggie kisses. Danny said I looked "relaxed" and I said I was better, but we still had to figure out how to deal with the dogs, but I didn't want to discuss it then. I showered off the road grime, poured a nice scotch and sat down on the patio.  Kiki came up to sit with me and I scratched her head. I can't stay mad at them. Likewise I can't stay frustrated with myself. Things will work themselves out -- I'll figure out what I am now and what my road ahead will be like. And when things build up every now and then, I'll ride off and let things go.
Collapse