When my dear friend Mildred passed away last week, her wishes, along with those of her partner Madelon, was that her remains be cremated.   They had pre-paid cremation plans with the Neptune Society that they had purchased some time ago.   We were notified earlier this week that the remains were ready.  When they bought the plans the Society had given them two nice rosewood boxes for the ashes and we needed to please bring one with us when we came to pick them up.  Yesterday Madelon and I went to their storage unit and dug around until we found them, and today I took Madelon's car and drove two hours to Riverside to get them.

I've never really bought into the idea of an expensive grave and casket and all the trimmings of a fancy funeral home service.  It seems like a tremendous waste of money and resources to me.   In going over the paperwork I saw they paid a little over $500 dollars for cremation services with Neptune, and good anywhere in the USA.   I'm sure the price has gone up in the 15 years since they bought it, but it seems like much more logical way to deal with things.   My will expressly said to cremate my remains when the time comes, unless someone wants to cough up the dough for a burial, as I don't want to pay for it!  Which brings up a point that I was thinking about in the two hour long drive through hellish Southern California traffic from Palm Springs to Riverside, and while I was waiting at the Neptune Society offices to take care of the paperwork and such.   Why do we take such great care, indeed pains, to deal with what's physically left when a person dies?
But those remains are NOT the person, yet we seem to treat them like they are.   Graves become a place to visit -- to remember, for people to "talk" with them in some cases.   The Neptune people were very reverent and respectful in handling the ashes and the box as they handed it to me, wrapped in a satin cover and treated like it's a sacred relic.   But it's not.  It's 8 pounds of dust -- the remaining tangible evidence that a wonderful woman named Mildred Ann Snyder walked this earth for 94 years and made a mark, loved and was loved, and is fondly remembered by a great number of people who will miss her.   But that box beside me on the long drive back was not Mildred.

You know I could have just bungee-corded the box to the back of the Harley, but I didn't want to try and navigate LA traffic on the bike, and what would happen if the box fell off?   Imagine the headline!  "Harley rider dumps remains along 91 Freeway -- makes traffic worse".  I'm sure Mildred had she been alive, would have loved to have taken a ride on the bike with me.  But as I said, that box was not Mildred, so what would it matter if I had gone on the bike, or if it had spilled along the freeway?  It's not Mildred.  it's dust.  And yes I'm intentionally not using a pronoun to make the point. 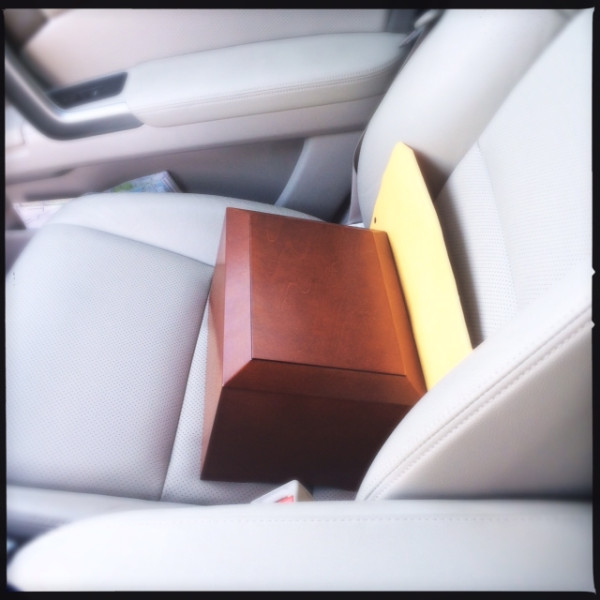 The essence that was Mildred is now part of the fabric of the universe.   Her spirit if you will -- what made her unique and special -- remains in all that knew and loved her.  I'm not sure what happens after we die.   Ayn Rand says we just go out, like a light bulb being turned off -- there's no emotion, there's nothing there, and what's left of you doesn't even know it happened.   Maybe, but I'd like to think there's more.   I love what Steve Jobs said towards the end of his life in one of his last interviews.   He told the interviewer who wrote his biography; "I like to think something survives after you die.  It's strange to think that you accumulate all this experience, and maybe a little wisdom, and it just goes away.  So I really want to believe that something survives, that maybe your consciousness endures."   He fell silent for a very long time.  "But on the other hand, perhaps its like an on-off switch", he said.  "Click..and you are gone."  Then he paused again and smiled slightly.  "Maybe that's why I never liked to put on-off switches on Apple devices."

Madelon agrees with me.  When I got back to Palm Springs and carried the box up to their apartment she said "now what do we do with this?"   I said I don't know, as we sat down on the couch and had some whiskey and looked at my latest photographs.   She told me that she asked that of a friend at the center who said she kept her husbands on the dresser with a picture of him on top.  I said "that's an idea", and Madelon quickly replied "a bad one."   I laughed.  She said "it's just a box of dust -- it's not Mildred".  I said "I know, no more than this empty abandoned homestead in the desert is a 'home'.  Maybe it once was, but now its dust as the essence that made it a home is long gone", as we looked over the pictures I took from a drive in the desert yesterday. 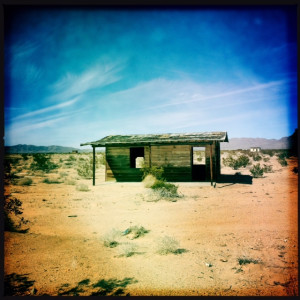