I woke up this morning in Portland -- actually almost right on the state line at the Columbia River, and only 164 freeway miles from home -- if we measure by the mileage markers on I-5.   That's about a 2.5 hour trip is all.   But this solo trip was far to short.  I really wasn't ready to head home and get off the road -- I was just getting into my routine, and loving being in a different place each night, and seeing what lies up ahead, and wondering what I'd see the next day.  Indeed much of this trip -- probably a little over half -- was "new road".  That's getting increasingly hard for me to find in Washington and Oregon in fact.

I decided to see if I could make it all the way back to Seattle without once having to set rubber on I-5.  It would be an experiment in back roads, US Highways, and the old way of getting from point A to point B.   Even my detailed Harley-Davidson Road Atlas didn't have a readily apparent way to do it without a few miles on I-5, or a very round-a-bout way through Eastern Washington or around the Olympic Peninsula.  But I knew there had to be a way, and as long as I kept pointed more or less North, I'd be fine.   And I wouldn't be lost -- just somewhere I hadn't been before.

I left Portland on old US-30.  This was once a main transcontinental highway -- it originally started in Philadelphia PA and went West through Pittsburgh and into Ohio and on to Chicago and across Iowa and into the Great Plains and Wyoming.  It once dipped into Utah and angled up into Idaho and across Oregon all the way to the coast at Astoria where it ended at the spot where the mighty Columbia River ends and empties into the Pacific Ocean.  I've ridden the parts of it that are left in Nebraska and Wyoming and Idaho.  The road leaves Portland on this wonderful old suspension bridge over the Willamette River -- the kind they don't build anymore. 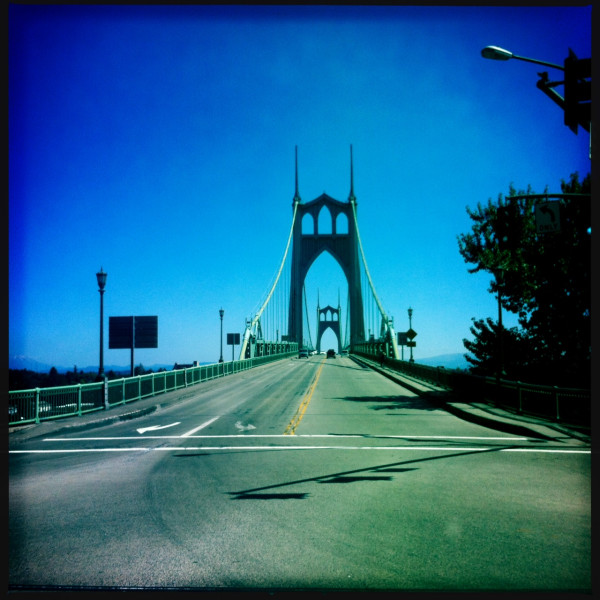 It then turns West and follows the banks of the Willamette River until that river meets the Columbia and then follows the Columbia as it turns North and then West again.  I leave my i-Pod on "shuffle" and it randomly selects from the 1500 or so songs I have on it.   As soon as I turned onto US-30 it pulled up "Sunday Morning Comin' Down" by Johnny Cash, which seemed to fit the mood perfectly as I wound through the neighborhoods of NW Portland and out across the bridge on this quiet and sunny Sunday morning.   Then, I kid you not, it pulled up Nat King Cole and "Route 66"!   I mean how perfect can this be?  It's a good omen, as I leave Portland on the old road to the coast riding in the sunshine with my feet up on the highway pegs.

The road winds through a few towns along the river as it angles North and then West.  There's only two places where one can cross the river this far downstream.  At Rainier, and again at the mouth of the river at Astoria.   At Rainier the bridge is a huge high arch over the river to allow for the ship traffic, and it drops down into and lands at Longview, WA.  It's very cool to ride up and over it and look down from that high up at the river traffic -- almost like flying in a plane. 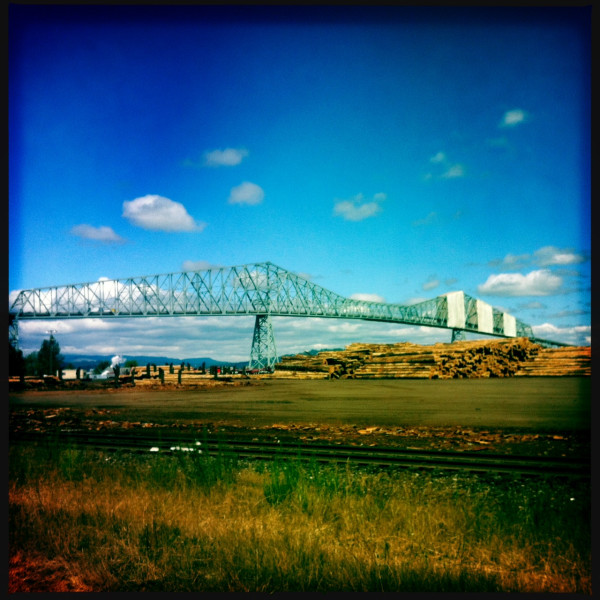 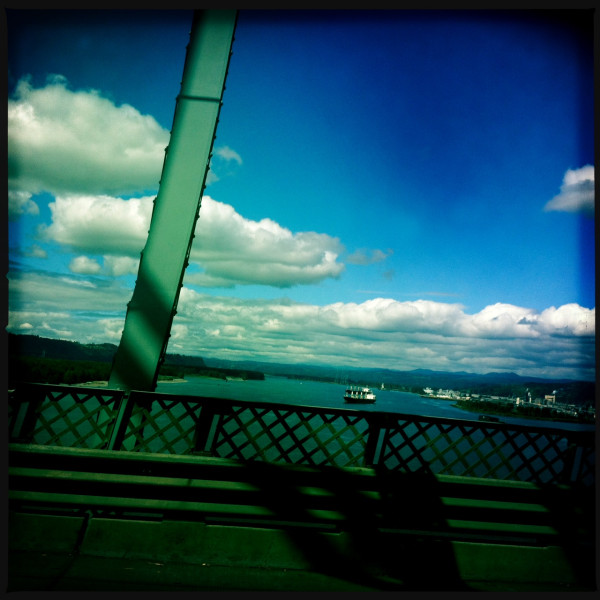 Once in Washington it got a little bit trickier to find a way to get North without taking I-5.   When they built I-5 it pretty much obliterated the old road -- US-99.   I had to string together some county roads and a few state highways, but I found as long as I kept more or less aimed North I would get where I needed to be.   I wound through countless farms and towns on a series of two lanes, mainly doing about 50 mph.  The towns are all listed along I-5 as exits -- but at the exit no town exists as they are some miles West or East of the actual exit.   It's almost like riding through a land that time forgot, and such light traffic it was a joy to ride.  I learned later that due to accidents and weekend traffic it was taking folks upwards of 4 and a half hours to drive between Portland and Seattle -- almost twice as long as usual.  It took me six.

I've always loved roadside Kitsch.  Those crazy things that people would build to attract tourists when Americans first started traveling the highways after WW II, and when the US Highway system was in its infancy.   There's still a few around here and there, and they are great fun to find.   Winding through Lewis County on some back road I motored into the town of Winlock and past -- according to the sign -- the "World's Largest Egg". 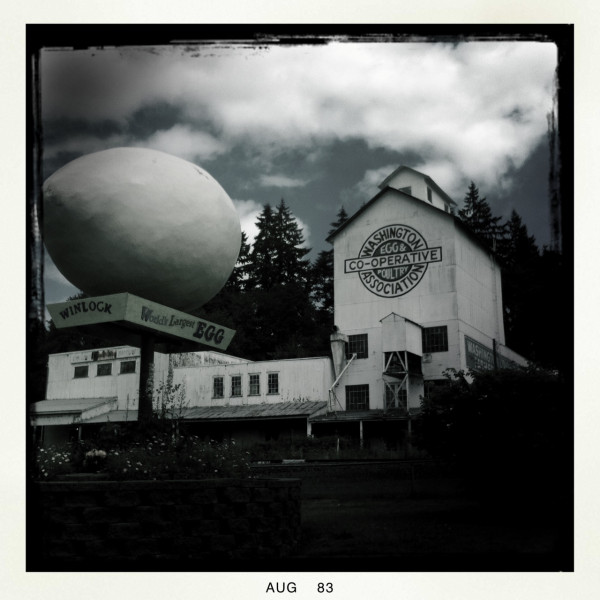 I guess we will have to take their word for it -- I have no way of verifying the claim.  It was obviously put there to celebrate the egg farming industry that is prevalent throughout this part of Washington.  Since Seattle is clearly the coffee capital of the world, all we need is a hog farm or two and Washington will be the center of the breakfast universe.

Thinking about all that food was making me hungry, and it was past lunch time, so I vowed to stop at the next appropriate place for a bite to eat.   It's always a good sign when there is a passel of motorcycles parked out front, and sure enough a few miles up the road in Napavine, WA was a 100 year old saloon named "Frosty's", hard up against the tracks of the BNSF/UP mainline between Seattle and Portland.   This is about as appropriate for me as you can get.   Bikes, Burgers, and Trains all in one place.

This place really was 100 years old -- they were selling T-shirts that said so, and thus it had to be true.  It certainly appeared so, and the floor had such a tilt to it that the table sloped and my drink kept sliding a few inches every time I set it down.   Nonetheless the fish and chips were good and I had a nice lunch and watched four or five trains go by.

After Napavine it was only a short few miles to Centrailia and then into Olympia.  I know these back roads pretty well since I'd explored many of them on my free time during the legislative session riding Bandit.  I eventually ended up heading up into very familiar territory -- WA-3 up the West side of Puget Sound and into Port Orchard, WA which is a short ferry ride across the water and home.

A ferry ride is a great way to finish off a trip.   Riding onto the boat and parking, and then going up to the deck and onto the front bow and watching the far shore get closer.  Seeing the familiar shoreline and neighborhood buildings approach, and feeling the ship start to slow down and then dock.  It signifies "Journey's End" like a period finishes off a sentence. 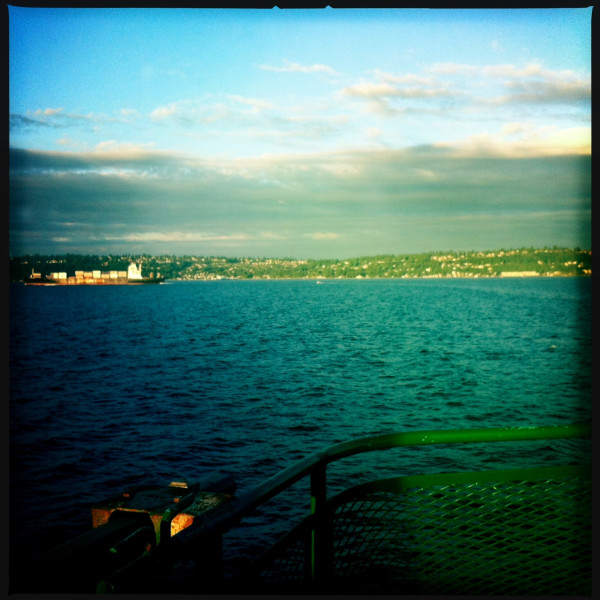 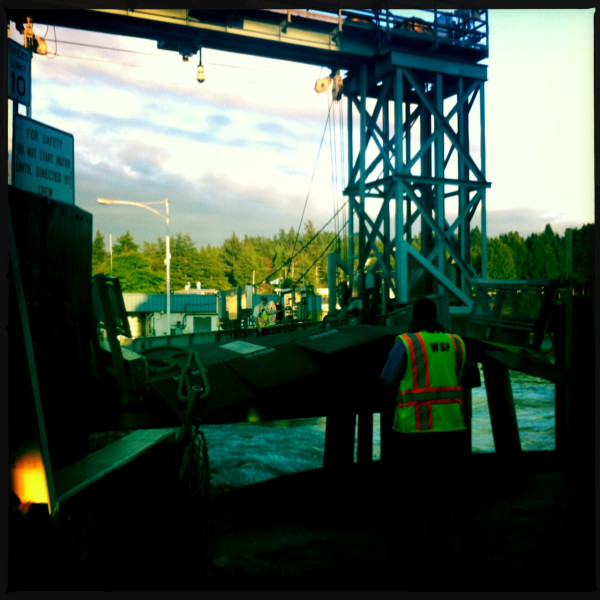 After that it's a short three minute ride to my home where I back Angus into the garage, unsnap the T-bag and walk into the house.  I'm home.  It's been a wonderful four day/three night trip -- in the end 832 miles and like I said, about half of them on roads I'd not been on.   And I was able to go the distance between Portland and Seattle without taking any freeway.  I'm always wistful when I get back, and I'm home and everything is familiar and its "my" place.   I wasn't gone long enough to get tired of the road -- even my long 20+ day trips I don't think I got "tired" of it.  This little four day one was like eating just one fresh from the oven chocolate chip cookie and leaving the rest.  I want more.  I crave more.  But it will have to wait.  The road will still be there.  It's not going anywhere.
Collapse