It's mid August and I've not had a chance to do a nice solo bike trip this year, and it doesn't look like I will be able to do a long cross country one at all this fall now, with the upcoming photo show in Pennsylvania and some other things.   So with a few days to spare and what looked like good weather I decided yesterday that I'd hit the road for a few days of wandering through Central Washington and Oregon.   It would give me a chance to put some miles on Angus (after almost a complete rebuild at Downtown Harley that is a whole 'nother story), and maybe find some more material for the ever growing "Ghost of the Road" series of photographs, as well as a new series I'm toying with of old neon signs -- both lit and unlit.

But I wake up this morning to rain.  Wouldn't you know it -- the one day out of the last God knows how many dry days it decides to rain is the day I wanna leave on a motorcycle trip.  I kept waiting and waiting, hoping it would clear, but it really never did.   I debated whether or not to postpone for a day, but after looking at radar maps and weather web sites, I figured I'd only get a 'lil bit wet and decided to put the rain gear on and head out.   And I was just a 'lil bit wet -- until I got to Bellevue and then it poured to Issaquah and then it dried out and then it started pouring again about North Bend and lasted until almost Cle Elum on the other side of the pass where it was supposed to be dry and 90.   At least it wasn't cold, and I've certainly ridden through worse, but I was glad when it cleared up and I bailed off I-90 at Cle Elum and took my favorite back roads to Yakima -- WA-10 and then WA-821 down Yakima Canyon.

I had them both pretty much to myself, and the recent rain made the air smell wonderful.  I found a quiet spot along the river to park and shimmy out of the rain gear.   Yakima Canyon is one of the funnest roads to ride on the bike -- some 40 miles through a deep basalt canyon along the river with hardly a single straight section, but a speed limit in the 45 range so it's not slow going, and very little traffic.  Even found a cool old gas station along the way and stopped to take some shots. 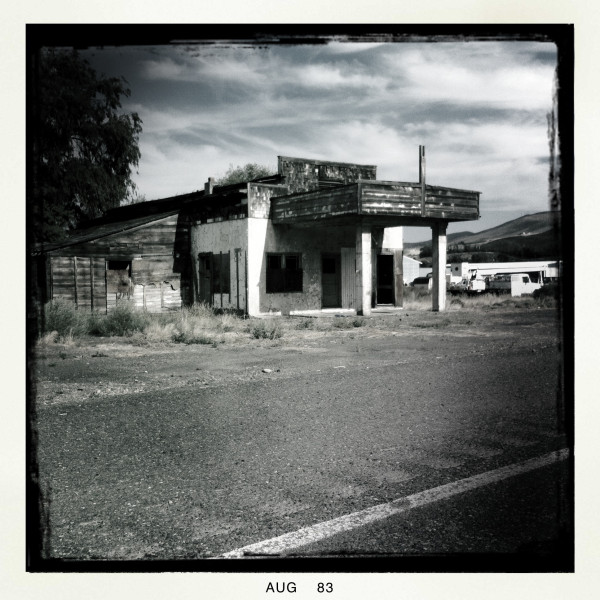 I was feeling very good about being on the road, smelling the fresh air, enjoying the wind on my face and the roar of the bike underneath me, riding along, letting my mind go blank, and looking forward to a nice dinner in Yakima where I decided to spend the night.   I motored into Yakima -- which is a fairly large town, and headed down the main drag towards the Holiday Inn Express I had booked.   I was just a block away, sitting in the left turn lane behind another car waiting for the light to change and make my turn when I glanced in the rear view and saw a car approaching rather fast -- too fast.

Next thing I know he's hit me and  it knocked me a bit and the bike started to go over.  I had the presence of mind to kill the engine before I let go of the clutch and tried to hold the bike up but ultimately failed and the bike went over and I went over with it, hitting my wrist on the pavement and having the bike roll on top of my leg.  Fortunately it was the left side not the right with the hot exhaust.

Its good he was only going a few miles an hour and there were plenty of folks who got out of their cars and got the bike off me and helped me up.  They had called the police as well and being such a small town five cars and an ambulance arrived within a minute or two.  It reminded me of Arlo Guthrie's song "Alice's Restaurant" where every police officer in Stockbridge, MA was on the scene using up "all kinds of cop equipment" to investigate his garbage dumping offense.   Well they had all kinds of medical equipment and cop equipment that they were using up on me and the "accident" too.  In reality only my left turn signal light was damaged, but it took three officers and two EMT's to make sure the "scene" was secure and I was OK.   While all this was going on one EMT insisted on taking my BP while another took my pulse and an officer interviewed me and the scared guy who hit me was begging me not to beat him up!

Needless to say my BP was rather high 160/100.  And once everyone had calmed down and all the witness statements taken, the police officers, the guy who hit me, and I pulled out of the intersection and into the parking lot of a Dairy Queen to work on paperwork.   The guy -- actually a kid -- who hit me was driving a beat up old Saturn, he was delivering pizza for Pizza Hut, and had no insurance, and was stoned on weed.   He kept saying "don't beat me up, I'll take care of it I'll take care of it."   I guess I looked like one mean pissed off biker dude.  Well I guess I was.   He babbled on and on about it was his fault, and the police officer finally told him to go sit in his car and shut up.   I imagine I could make all kinds of money suing him and Pizza Hut.

There is a Harley Dealer here and I'll go have them check Angus out in the morning but I already gave him a once over and other than the light and a scuffed saddle bag he's OK.  Ill send the kid the bill and hope he pays it.  I've calmed down, and the BP is back down to 138/80.  I've taken some Tylenol and had a nice dinner at Sonic.   I'm resting in the hotel now.   My wrist is a bit sore and so is the ankle, but other than that I'm fine.   It could have been a lot worse.   My Mom's prayers and my guardian angel were riding with me today for sure.
Collapse