Maybe it was the era I was raised in, maybe it was my folks and the things they taught me about the golden rule, maybe it was the Mormon attitude of watching out for your neighbors and for each other -- or maybe its a little of all of it rolled up.  I don't know if I was "taught" directly, or if it's just something that comes with my personality, but I'm the type of guy who just does things without being asked "just because" its the nice neighborly thing to do.   Hell, I even speak to my neighbors, which in Seattle is apparently kinda rare.  I remember when I first moved to the city 22 years ago, my neighbors were somewhat taken aback when I introduced myself and spoke to them and offered to help them when they needed it.   "Who is this crazy guy and what's his ulterior motive?" I could read in the invisible cartoon thought bubble over their heads.

A few years ago, because of my nature and by reaching out -- along with my former partner working at becoming friends with our neighbors, we had quite the little neighborhood of folks knowing and talking to each other.  We even had periodic block parties where we'd go from house to house for drinks, appetizers, main course, desert, and we'd all go to a concert.   All that has faded away after we Tony and I divorced and most of those neighbors moved away.  But I still try.  In fact my new neighbors mentioned specifically the "nice neighbor across the driveway" in their purchase offer.  I'd become a selling point!

However, as I think about it, rarely is that come back to me the other way.   It's not an irritant, nor is it something I expect, but I was thinking the other day how  nice it would be if once -- just once -- it would work the other way. And what got me to thinking about it is something so simple -- so minor in the big picture of things, and so easy to do that I do it without thinking, and I would think others would too.  I seem to be alone though.  What is it?  It's taking in the empty garbage cans.  I know, silly right?

Tuesday's are garbage days.   Everyone sets their cans out Monday night, and the trucks come fairly early Tuesday morning.  Usually I'll walk up the driveway I share with my neighbors and grab my empty can, and theirs, and bring them both back down -- often because I'm up early and on my way to the gym or something.   No sweat off my back, easy to do.  Empty garbage cans with wheels, and if you don't bring them in right away, they can blow over and down the hill in the wind or get run over by cars.  And empty cans look tacky in front of a house I think.   In the 15 years I've lived here, I've had five different couples or families live in the house I share the driveway with.   I can't think of a time that they any of them have brought both their and my cans back down.  Maybe they have, but its so rare I don't remember it. 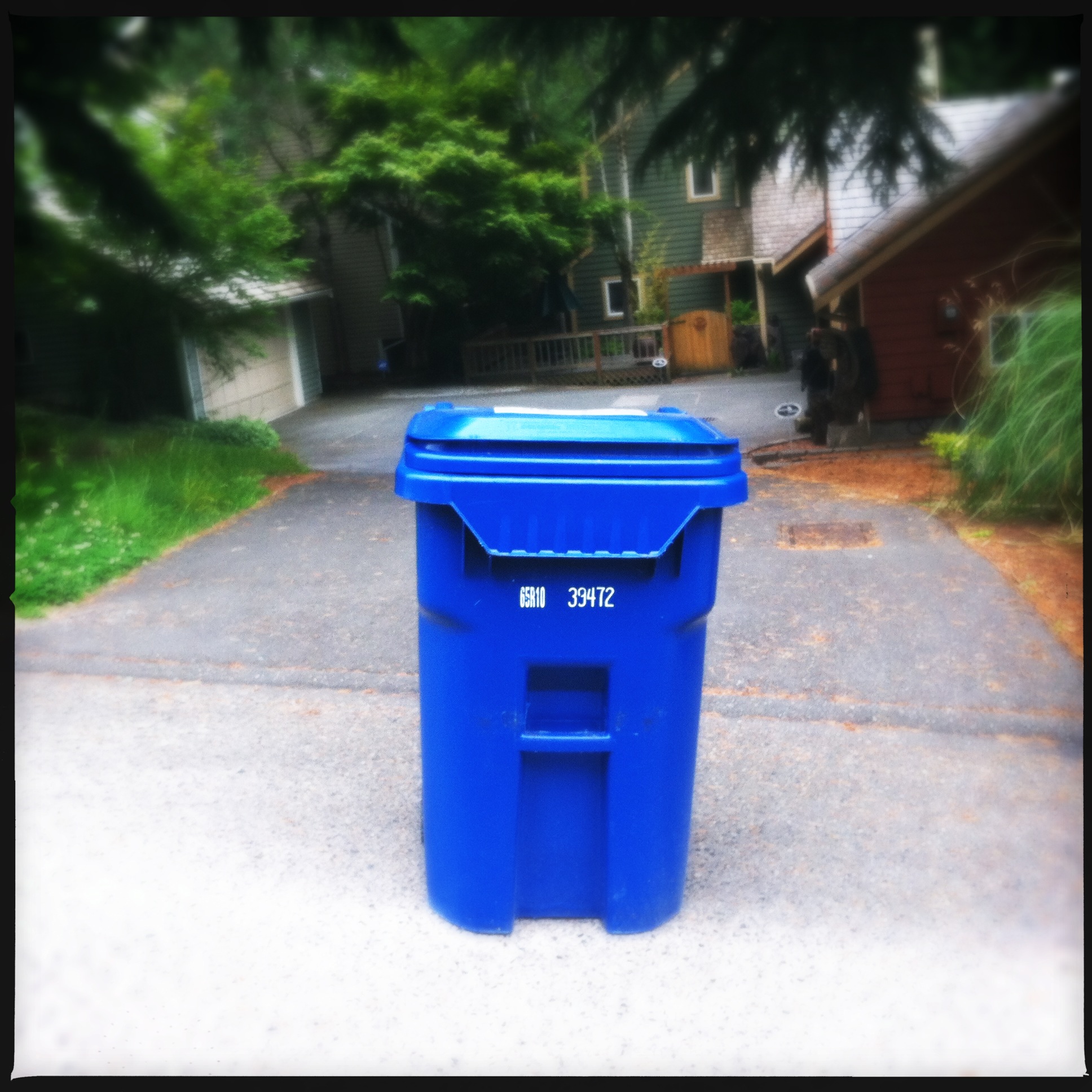 My new neighbors even commented shortly after they moved in, asking if I had brought their can back down and saying thanks.   So I was very surprised last week when I was up making breakfast and I looked up the driveway and saw my neighbor walking up the drive.  Are they gonna get the cans?   Both of them?  After their comment the week before I was hopeful.   They got their can and I kinda held my breath and thought "are they gonna bring mine down too?"   Nope.  Even though mine was empty, and sitting right next to theirs. They grabbed their can and brought it down and left.  Now maybe they were in a hurry, maybe they had a physical issue that would keep them from bringing both down, I don't know.  Maybe they don't think it's their "responsibility", and they are right -- it isn't.  It isn't mine either, but I still do it.

Sigh.  Oh well.  Maybe I'm unique in the world.  And I'll continue to bring both cans back down, even though the favor is rarely returned.  I can't not bring them both down when it's so darn easy and its the neighborly thing to do.  I would feel silly bringing down just mine and leaving theirs up on the street.   Maybe it's an Andy Griffith mentality, but it's me.  Well it's Monday night -- time to go put the garbage can out....
Collapse