Last column of 2019! If there's one thing about me most folks know is that I don't suffer fools or foolishness lightly. The Washington State DOT is certainly full of them based on their idiotic plan to reduce traffic deaths and injurty to zero -- known as "Target Zero". 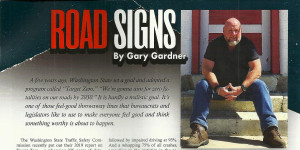 A few years ago, Washington State set a goal and adopted a program called “Target Zero.” “We’re gonna aim for zero fatalities on our roads by 2030.” It is hardly a realistic goal. It’s one of those feel good throw away lines that bureaucrats and legislators like to use to make everyone feel good and think something worthy is about to happen.
The Washington State Traffic Safety Commission recently put out their 2019 report on Target Zero – a whopping 235 pages of data. Tons and tons of data. It’s enough data to make your head spin. I looked at an electronic copy – if they printed this thing we could open up a few closed paper mills but that wouldn’t be good for the environment. You can download and read it yourself by going to the WTSC web page at www.wtsc.wa.gov.
Data is always useful in making decisions, but the only thing this much data does is make bureaucrats look like they are doing something. And more importantly, this much data obfuscates the real world and consequently obscures common sense. People tend to look to data and make a leap of logic and attempt to link statistics to causality. This report and the goals of Project Zero are a prime example. In the opening paragraphs it states: “A fundamental element of the Target Zero plan is that it is data-driven. Through evaluation we identify the critical factors that contribute to fatal and serious injury crashes on Washington’s roads…uses those factors to determine proven and recommended strategies along with new ones for reducing traffic deaths.”
For instance, the data on motorcycle accidents – both fatal and those with serious injuries – is essentially flat, and given the increase in population, has slightly declined. From 2012-2014 there were 225 fatal motorcycle crashes, and 1,165 ones with serious injuries.  From 2015 to 2017 there were 236 fatal crashes, and 1,209 serious injuries. While statistically that’s up 3.8%, given that Washington’s population increased 3.6% in that same time frame, motorcycle crashes are essentially flat. Yet given Project Zero’s unrealistic goals, it appears we are experiencing an increase in fatalities and accidents when we actually aren’t.
And the cause of those crashes? Speeding is the major factor – 95% of all fatal and serious motorcycle accidents are caused by speeding, followed by impaired driving at 93%. And a whopping 75% of all crashes, according to the statistics in the report, are caused by the motorcycle rider. Only 25% of them are caused by other drivers. The report also breaks crash data down into sub-categories like distraction, lane departure, and older 70+ drivers. But in these mountains of data, it doesn’t give us any links to how many of those motorcycle crashes are caused by the sub-categories – distraction, lane departure, and age etc... And they are missing what I and others consider as the major factor – riding above one’s ability.
And this is why it’s easy to get lost in the wilderness of data. If we boil it down, the vast majority of motorcycle crashes are caused by riders doing stupid things – driving too fast, driving impaired, driving beyond their skill level. Did you notice I just said, in 23 words, what their entire 235-page report says?  And now that we know the “what”, how do we address the “why?”  WTC’s answer to the “why” is that riders aren’t well trained enough, and that if we just increase the training, increase the required skill levels, we’ll start down that magic yellow brick road path towards the “Zero” in Project Zero.
Their plan is to “increase the difficulty level of the endorsement tests, and thus push more riders into training they will need to gain the skills needed to pass the exam. This should result in an increase in the demand for additional training above basic/novice course levels and result in riders gaining the skills and knowledge needed to avoid crashes.” In other words, a tougher skill test for an endorsement.
The new skills test that goes into effect at the first of the year makes it much harder to pass the test, requiring a significant increase in braking skills and turning skills. So, tell me how this is going to address riders doing stupid things like driving too fast and driving impaired?”  I have news for you:  ITS NOT!  The report states 72% of the riders in fatal or serious injury crashes have an endorsement, and the lack of an endorsement is “more likely an indicator of risk-taking behavior rather than a cause of fatalities.”  Making the endorsement test harder is not going to have any impact on reducing motorcycle crashes. Yet this is their plan to move them towards the shiny unicorn on the hill of the goal of Project Zero. And note that none of this addresses the root cause of accidents. It’s not so much a lack of skills, as a lack of intelligence.  Stupid people doing stupid things.
You know what will help them get closer to that goal – and make it a more realistic one?  How about we follow the simple rules that back when I was the lead road captain for Seattle’s HOG chapter. It’s so simple we put it on a laminated card and every road captain read it out loud before every ride: “Obey the traffic laws. Stay in your lane. Ride your own ride (i.e. within your skill level). Under no circumstances ride impaired by alcohol or drugs.”  All common-sense simple things, and you don’t need 235+ pages of data to tell you that.
And if we really wanna get to “Zero”, how about zero tolerance. Zero tolerance of stupid behavior. Riding drunk or impaired, riding too fast, riding recklessly.  One ticket and a year’s suspension of riding privileges.  Two and it’s two years. Three and permanent suspension.  You don’t think that will get things down closer to zero?  No, we can’t fix stupid. There will always be people who ignore those simple rules. But if you drill that into folks head often enough and with conviction, you’ll just might move the needle closer to that magical zero of Project Zero.