It's mid November, and it's yet to feel like fall here in the desert. Heck we've had nearly 100 degree temps this week, although cooler air and rain are on the way. Makes me think of my days in Seattle getting ready to put the bike up for the winter. Fortunately we don't do that here... 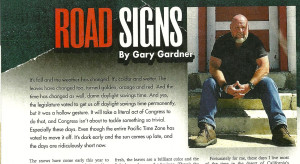 It’s fall. The weather’s changed – it’s colder and wetter. The leaves have changed too, turned golden, orange and red. And the time has changed as well – damn daylight savings time. And yes, the legislature voted to get us off daylight savings time permanently, but it was a hollow gesture. It will take a literal act of Congress to do that, and Congress isn’t about to tackle something as trivial as that especially these days, even though the entire Pacific Time Zone has voted to move it off. Its dark early and the sun comes up late and the days are ridiculously short now.
The snows have come early this year to the Pacific Northwest -- one of the earliest snowfalls ever at Stevens Pass. But for the most part they’ve not stuck around. But they will. Sooner rather than later. When I lived full time in Washington and the weather turned like this I’d always be telling myself – “gotta get in one last ride”.
Once the weather changes for good you’re kinda stuck. So, gotta get in one last ride.  One last ride up over the North Cascades Highway, up past Concrete and the Seattle City Light dams and down into Winthrop and then across Loup Loup on the way to Twisp before they close the pass for the winter. Wash DOT tries to wait until Thanksgiving, but the early snows this year may be a harbinger of an early closing.
Gotta get in one last ride up and over Stevens Pass and down into Wenatchee. Now after the apple harvest has cleared the orchards of fruit and the roads of apple trucks. Then up and over Blewett Pass, stopping at Owen’s Meats in Cle Elum for some of the world’s best jerky and sausage.
And then one last ride over my two favorite passes, Chinook and Cayuse. Riding up past Mount Rainer and down into Yakima for a burger at Miners, then up the windy and oh-so-quiet Yakima River Canyon on the old road to Ellensburg and then back to the city over Snoqualmie Pass.
Gotta do it one last time before winter comes. Gotta do ‘em all, one last time I’d tell myself. One last big ride for the year. Dang winter. Why does it have to come so darn early? Ask most folks and they’ll tell you that fall is their favorite season. The air smells fresh, the leaves are a brilliant color and the light hangs low on the horizon. There’s the smell of wood smoke on the air, and we can break out the sweaters. It’s the last gasp of color and light before the long wet gray dreary winter of the Northwest sets in for its interminable duration.
Time though – there’s never enough time it seems. My old Seattle HOG chapter used to do a “Five Pass” ride every summer. It was an all-day affair and in the summer the days are so long you can do it with ease. Over North Cascades and Loup Loup on SR-20; then over Blewett on US-95 and Chinook and Cayuse on SR 410.  This is about a 550-mile trip and takes all day in the summer when we have all day to do it and over 15 hours of daylight. With meal stops, gas and restroom breaks, and rest stops it’s about a 15-hour day or longer.  But what a day. 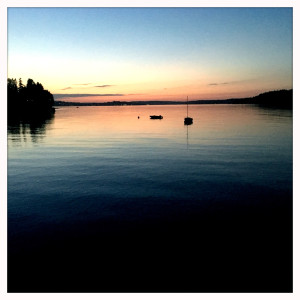 So one last ride over the Cascade passes in the fall seems a bit out of the question. But still, the mind wanders and dreams and the clock keeps ticking. The days keep getting shorter. The weather keeps getting colder. The window keeps closing. Which also sums up life. The clock keeps ticking, time keeps passing, the window of opportunity keeps sliding closed. Before you know it the opportunity is lost.
Fortunately for me these days I live most of the time in the desert of the Coachella Valley. And our weather window rarely closes. From its base I look over to the 11,000-foot Mt. San Gorgonio, which is the center of the Sands to Snow National Monument. It’s obvious why, I’m standing in sand and looking up and snow. But the roads there don’t close in the winter, and the snow is generally high enough to stay off the roads. We can ride year-round here, although in the summer it’s a bit challenging.

I miss my mountains of the Northwest. Today’s Seattle Times predicted an early closure of the North Cascades along with Chinook and Cayuse passes. “Climate change” has brought on early snow this year they say. And although I’m sitting in 70 degree sunshine in the desert, after reading that I found myself thinking for a moment like I did when I lived in Washington full time: “gotta get one last ride in” and I’d be trying to finagle a way to sluff off work and just do it. Sometimes I could, but more often than not I couldn’t. That’s the saddest part. I think we all have to remember we ‘gotta get one last ride in” each and every day. The seasons changing. The days are getting shorter. The clock keeps ticking. Gotta get one last ride in.