Reading my Facebook news feed a few weeks ago I came across an article from the Daily Olympian, the newspaper in Olympia, WA where I lived and had my lobbying firm for many years.  They were talking about one of my favorite hangouts up there closing. As you will read, the joint was on old US-99, which at one time was the road that connected the desert to the Pacific Northwest. Reading about Norma's closing and being metaphorically connected via US-99 is the subject of my October column, which also marks ten years of doing a monthly column for Quick Throttle too! 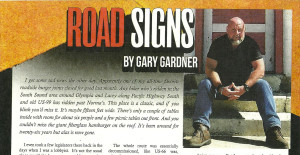 I got some sad news the other day. Apparently one of my all-time favorite roadside burger joints closed for good last month. Any biker who’s ridden in the South Sound area around Olympia and Lacey along Pacific Highway South and old US-99 has ridden past Norma’s. This place is a classic, and if you blink you’d miss it. It’s maybe 15 feet wide. There’s only a couple of tables inside with room for about six people and a few picnic tables out front. And you couldn’t miss the giant fiberglass hamburger on the roof. It’s been around for twenty-six years but alas is now gone.

I even took a few legislators there back in the days when I was a lobbyist.  It’s not the usual place you’d think someone would try to wine and dine an elected official, but there were a handful of them that always enjoyed going to Norma’s and I liked it because it was not  one of the fancy-schmantsy places in Olympia where we’d run into other lobbyists and legislators. It would be a “go-to” place when I needed a break from the capitol, especially on warm spring evenings. I could hop on the bike and ride out the old highway and enjoy a burger and a shake from this tiny hole-in-the-wall.
Norma’s sat on Pacific Highway South.  At one time this was US Highway 99. Most of old 99 was supplanted by Interstate 5 when it was built, but the remains of the old road are still there in places. And there’s a connection to US-99 that I still see almost every day, whether I’m in the desert or in the Pacific Northwest. Reading about Norma’s closing got me to thinking about that connection the other day too. 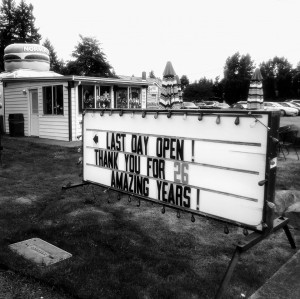 You see back in the pre-interstate highway days, US-99 was the main way to travel up and down the west coast, along with its parallel cousin, US-101.  Where US-101 ran – almost literally – along the edge of the world, US-99 ran inland. It connected Vancouver BC, to Bellingham, WA, Everett, Seattle, Tacoma, Olympia Portland and all down the Willamette Valley into California. In the Golden State it ran down the San Joaquin Valley – that big long valley that is the nation’s supermarket, then up over the mountains into the Los Angeles basin, then east to the desert of the Coachella Valley and Palm Springs, before heading south and ending up at the Mexican border near Calexico.
The whole route was essentially decommissioned, like US-66 was, when Interstate 5 was completed. And here and there it’s still signed as a state highway 99, the Departments of Transportation in the coast states have put up signs saying “Historic Highway 99” in a few places where the old highways still exists too, which makes a highway romantic like me smile. I’m the kind of a guy who reads maps like a book, loves the history of the highway, and who not only collects old maps, but likes to find the old highways wherever I can and ride them on Angus.
It’s on the old highways that you find America – not on the super slab of the Interstate.  You’d never find a Norma’s on the Interstate; you have to get off them and wander the old roads to find the Norma’s of this world. One of my favorite quotes of all time is from the Disney/Pixar movie “Cars” when Sally and Lightning are discussing the demise of Radiator Springs, and Sally says back before the Interstate, the road moved with the land, it didn’t cut through it and people traveled on the road to “have a good time, not make good time.” Now days you can’t even “make good time”, particularly on I-5 through the South Sound, you might as well get off on the old highway – at least up until last month you could still find a Norma’s.

And the old US-99 is what connects me to this day. Connects me and my life in the Coachella Valley desert, and my life in the lush green Pacific Northwest. I can stand on Indio Blvd. here, look to the Northwest, and know that this road at one time connected the spot I’m on to the spot I’d like to be – at Norma’s ordering a cheeseburger and a peach shake. It’s not the same standing on the side of I-5, if I even could stand on the shoulder without being run over. But I can stand on the side of Indio Blvd, or Pacific Highway South, next to an old motel, and down the road from a small burger joint, in the shadow of a “Historic US-99” highway sign and feel in my core the connection between the desert and the forest.
Back when I was in graduate school in Tempe, Arizona, I could feel the same connection on the old US-89. It was main street in Tempe and ran past the university, over the bridge across the Salt River, and north up into Utah where it was the main road into my hometown of Salt Lake City. Whenever I was homesick for my family or my friends in Utah, I could stand on main street, and know if I followed that road long enough I’d get home. Like an electrical cord, I could feel “plugged in” to home whenever I would walk the street and look up and see that black and white shield sign with a US-89 in it.
When I’m in the Northwest and I’m missing the desert, I know US-99 will take me there, and when I’m the desert and I need a break from the heat, US-99 will take me back up. In the pre-interstate days that’s how we got from Washington to the Coachella Valley – it’s where the road went. I think to this day that’s why so many people from the northwest make their winter home in the desert. That’s where US-99 went.

And now with Norma’s gone, it means another piece of US-99 is gone. But somewhere out there along the old road is another Norma’s – I’m just going to have to follow the old road until I find it.