Winter in the desert continues today -- can't seem to make up it's dang mind. It was nearly 90 earlier this week -- today it's high 50s.  Had to get the long pants back out.  Meanwhile it's been in the 70s in Seattle -- record breaking early spring temps for them. This month I explore the never ending rivalry between Washington and Oregon -- but this time Oregon wins... 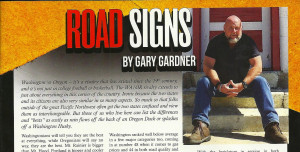 Washington vs Oregon – it’s a rivalry that has existed since the 19th Century, and it’s not just in college football or basketball. The WA/OR rivalry extends to just about everything in this corner of the country.  Ironic because the two states and its citizen are also so very similar in so many aspects. So much so that folks outside of the great Pacific Northwest often get the two states confused and view them as interchangeable.  But those of us who live here can list the differences and “bests” as easily as rain flows off the back of an Oregon Duck or splashes off a Washington Husky. Washingtonians will tell you they are the best at everything, while Oregonians will say no-way they are the best.  Mt. Rainier is bigger than Mt. Hood. Portland is hipper and cooler than Seattle. One has no income tax, the other has no sales tax. Washington has Starbucks, Microsoft, and Amazon. Oregon has Nike and…, well that’s about it.
From a motorcycle rider perspective, both have wonderful roads and destinations to explore.  Oregon has US 101 along the coast, and Washington has SR-410 over Mt. Rainier into Yakima. Washington has US 2 across the state. Oregon has US 395 from John Day to Pendleton. It’s hard to pick a winner, although at least in Washington you can pump your own gas.
But there is one category that Oregon beats Washington hands down. Yet again. According to Wallet Hub, a personal finance web site, Oregon is the best state to drive in in the United States. Washington is way down the list at number 48. Washington is the worst state in the continental United States -- even California, my other home, ranks higher in drivability than dear old Washington.  Now I’ve been writing this column for some nine years. I think every year someone comes out with some sort of a drivability ranking, whether it’s the insurance industry or someone else, and every year Washington ranks at or near the bottom. Kind of like the way Alabama always ranks at the bottom for education spending, Washington seems to always rank at the bottom when it comes to drivability. There just must be something magical about crossing over the Columbia River.
The Wallet Hub survey ranks the drivability of states with 30 sets of categories, the main ones being: Cost of ownership and maintenance; traffic and infrastructure; safety, and access to vehicles and maintenance. Washington ranked well below average in a few major categories too, coming in at number 48 when it comes to gas prices and 44 in both road quality and car theft rate, and 33 in congestion. Only 33? This despite personal experience in congestion that rivals Los Angeles whose state is dead last in that respect. At least Washington has a long way to go to the bottom of the congestion category.
Where did Washington come in above average you ask? Washington ranked 20th in per-capital car dealerships, and 21st in number of auto repair shops. This is truly the free market in action folks – the market goes where the problem is. Lots of dealers and repair places to sell you another ride or fix your motorcycle when it breaks on some of the worst roads in the country.
Compare that to the best place to drive in America according to Wallet Hub – Oregon.  And this despite the annoying gas pumping issue and a perpetually lower speed-limits everywhere. Oregon comes in above average – way above average in all those same categories where Washington falls short. They come in at number 11 in Traffic infrastructure, compared to Washington’s 33, and they rank at  number 22 in overall cost of ownership, compared to Washington’s  bottom dwelling number 48!
In cost of ownership Washington ranks 48th – only California and Hawaii are more expensive. When you break down the cost of ownership, the biggest factor in that category are license costs, sales taxes, and gas taxes. In all three of those Washington ranks dead last. It has the most expensive car license fees, the highest sales tax on vehicles, and at the time the survey was done in 2018, the second highest gas tax. That has now fallen to third since California raised theirs.
With the legislature in session in both Washington and Oregon right now, these rankings could change. I’m not hopeful but it could. They could reduce Washington’s registration fees, especially in the Sound Transit counties, but I don’t see it happening, nor will they reduce the sales tax. Washington will likely remain a very expensive place to drive or ride in for the foreseeable future.
What I don’t understand is the traffic. Congestion in Portland is as maddening as it is in Seattle – I’d rank them equal with each other and slightly ahead of Los Angeles and San Francisco and New York City in descending order. And despite that, Oregon still comes out as number one. Good for them. And as they say, one man’s data is another man’s fake news.
In any case, if I had to pick a favorite place to ride between either Washington or Oregon, I don’t know if I could – despite Oregon’s silly gas pumping law (can you tell it really irritates me?) They both rank high in my book, and I couldn’t tell you which I like better to be honest, they both have fantastic places to ride. I love riding US 95 in Central Oregon, and US 101 on the Olympic Peninsula. I love SR 14 in Washington, and US 395 in Oregon. I can’t tell you which state I like riding the best. So, let’s split it down the middle – right down the Columbia River Gorge. But in that case, we’ll have to give the edge to Washington, as SR-14 is better than I-84 since a two lane beats a freeway in my book any day. So maybe Washington wins it after all. Especially since I can pump my own gas.