We have been having "winter" here in the desert this year -- over 90 days without a high over 80 degrees, and lots of snow in the mountains, and a tremendous amount of rain. More rain than we get in a year and it's only February!  Meanwhile back in Seattle they have been getting a ton of snow too. I've not done any riding yet this year either -- so busy with my City Council duties and recovering from the hospital stay in December, plus the crummy weather. Hoping all that changes soon.  Meanwhie, here is my February QuickThrottle column, in which we look at the slap on the wrist a rouge bad cop got after pulling a gun on a rider last year that made national news.  Very dissappointing.

I think like most folks, we bikers have kind of a “love/hate” relationship with law enforcement. We rely on them for protection, we appreciate it when they respond to our calls for help, and we mourn them when they are killed or injured in the line of duty. At the same time, we curse them when we are pulled over for no “real” (in our mind) reason, when we are given a ticket for doing something “everyone else does”, or when we are nearly run off the road by a cell phone using cage driver and there isn’t a policeman in sight.

And police are often in a no-win situation – damned if they do, damned if they don’t. It’s easy sometimes to forget that they are human beings just like we are.  It’s that “love/hate” relationship that drives our interactions with them and colors our perceptions when interacting with them. But the vast majority of interactions with law enforcement are – even when we get a ticket – non-confrontational and not entirely unpleasant. But all it takes is one bad apple, one bad encounter to make everyone suspicious of each other, be they biker or cop.

It was a few bad apple police that would “profile” riders and use that as an excuse to pull a rider over. Things like wearing a leather jacket, or a patch from a club, having loud pipes, ape-hanger handle bars, then using that as an excuse for harassing or looking for a reason to write a ticket, that created the need for Washington State’s first in the nation “anti-profiling” legislation from a few years ago. As far as I’ve been able to tell, incidents between riders and law enforcement are down because of that, and we should applaud our rider groups for getting that legislation enacted.
Which is why the now infamous incident in August of 2017, where a rider was stopped in the middle of the road and had a gun pulled on him by an off-duty, un-unformed officer who proceeded to pull a non-service issued gun on him, caused such a stir.  I’m sure you remember the incident – which I wrote about as well back in the December 2017 issue. The video, which was recorded by the rider, one Alex Randall who was fortunately for him wearing a helmet cam, went viral and can still be found on YouTube. (https://www.youtube.com/watch?v=YSNb6NPoCy0) If he hadn’t had that camera, no one would believe what happened him. In fact, watching the video a year later is still frightening. 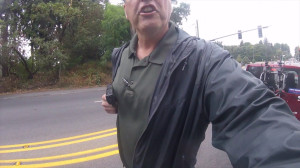 But what is even more frightening is that after a year-long investigation, and clear evidence of the terrifying if not illegal behavior on the part of King County Sheriff’s detective Richard Rowe, it netted only a five-day suspension for the detective and a $65,000 payment (of taxpayer dollars) to the rider, Alex Randall. Five days off and a settlement that didn’t cover legal fees was all the punishment for the abhorrent behavior. Watch the video. Tell me that the officer, who had three previous complaints of road rage and misconduct against him, shouldn’t have been fired.
The reason he wasn’t fired?  His behavior was not considered a “use of force”. In who’s topsy-turvy world is having a gun pointed at you by someone isn’t a “use of force”, especially when it’s a police officer who failed to identify himself as such, who’s standing in the middle of the road blocking traffic, and who said to Randall “you’re driving f-ing recklessly, give me your license or I’m going to knock you off your bike.”  Really?  This isn’t a “use of force”?
The Sheriff’s office internal investigation unit determined in December that the detective had violated some internal policies during the incident, but he had not used excessive force because “no actual force was used.” Now apparently as a result of this incident, King County Sheriff Mitzi Johanknecht is revising their internal policies to state that drawing a weapon is in fact a “use of force” – so perhaps there is some good that will come out of this. It seems kind of obvious that drawing a weapon is a use of force. I’d suggest that keeping track of such incidents should be required.
Detective Rowe is quoted as saying he had drawn had pointed his gun at citizens “multiple times” and never reported it. Let’s hope the Sheriff makes this a policy. And maybe even take it to the next level – have the legislature require it of all police departments. There is a review of all shootings and other uses of force – maybe we need a review of all weapons drawn and pointed at individuals too, or at least some training that an officer needs a lawful reason to draw a weapon and point it at someone. Something Detective Rowe clearly did not.
Why is it we’ll tolerate a “bad apple” – whether it’s on our side or theirs?  I know riders who will defend other riders regardless of their behavior, out of some sense of loyalty, just like law enforcement officers have their infamous “thin blue line” who defend all police actions regardless. Why is that?  Especially in obvious cases like this one?  I’ll be the first to call out a rider for asinine behavior – why can’t the police do the same?  This officer deserves to be fired at the very least.
Gary can be reached at roadsigns@comcast.net and you can read his blog at http://grgardner.livejournal.com or http://www.grgardner.com
Subscribe