Well it seems another year has gone by. And the only thing I've written or posted have been my Road Signs columns this year. That saddens me, and as we make a new years resolution, I'm going to do my best to write more than just my columns for here.  I miss writing, and my focus has been elsewhere this year for sure. Next year is right around the corner, and among a few other changes, I'll be making a better effort at writing more.

So here's my December column, last of the year for Quick Throttle -- in which we talk about the misperceptions many people have about bikers, and wonder why that is....

Merry Christmas and my 2019 be fantastic! 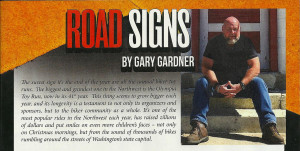 The surest sign it’s the end of the year are all the annual biker Toy Runs.  The biggest and grandest one in the Northwest is the Olympia Toy Run, now in its 41st year.  This thing seems to grow bigger each year, and its longevity is a testament to not only it’s organizers and sponsors, but to the biker community as a whole. It’s one of the most popular rides in the Northwest each year and has raised zillions of dollars and put smiles on even more children’s faces – not only on Christmas mornings, but from the sound of a thousand or so bikes rumbling around the streets of Washington’s state capital.
Bikers on the whole are among the most giving of any group. Get two bikers together and the next thing you know someone will suggest a charity and voila they’ll be out collecting for it. Entire clubs have been formed to raise money and awareness for an issue or cause – Bikers Against Child Abuse for example. It’s very common for HOG chapters and other groups to adopt a cause or two, and groups of bikers to pass around the hat for a fellow rider who’s injured, sick, or just plain down on their luck.
I’ve often wondered why is that?  Why are bikers among the most charitable and giving people?  What is it about the motorcycle community that makes us that way? I honestly don’t have a good answer. It’s easy to discern “why” with some groups – churches for example. It’s part of the basic fundamental value of all religions to help those less fortunate or in need. It’s also why clubs and fraternal organizations like Rotary and the Elks were formed and still exist – community service and charity.  But bikers? Why is that?
We riders will use any excuse to get together for a ride, and more often than not we are riding for a charity or to raise funds for someone in the community who has fallen on hard times or for a fellow biker who is injured, or to honor the passing of someone.  So why are so many people so afraid of bikers. Why is that?  Is it the noise from the bike?  Is it a cavalier attitude towards traffic laws?  (Sort of like how I get very irritated at the small number of obnoxious bicyclists who when they ignore traffic rules and get pissed off at cars make all bicyclists look bad.)  Is it the black leather we wear which makes everyone look menacing?  Is it the long hair? (or lack of it in my case) tattoos and other piercings. Is it the "devil may care" attitude, or the often obnoxious and semi-obscene (or really obscene) patches we sometimes sew on our leathers?  All of the above?   My friend and pseudo Grandmother Madelon who is about to turn 90 years old this month once said to me: "You sure scary when you pull up on your bike and if I didn't know you, I'd be scared to death, but I know the real you. But I won't tell anyone you're just a big pile of goo inside."  Goo?  A pile of goo inside?  Me?  Maybe I'm just a big softy, who knows -- but damn near every biker I know is like that too!  And it's not a front!   And while we may look like tough bastards on the outside -- as Madelon said, we are all just "a pile of goo inside."  My sister likened it to the scene in the Wizard of Oz where Dorothy and company are trembling in fear before the Wizard -- his scary disembodied head floating above them with flames on the side, before Toto pulls back the curtain to reveal the real guy. Well that’s what we bikers are. We just have to work to make sure the public pulls back that curtain from time to time.
Toy run season is the perfect time for that. Alas, by the time you read this the big Olympia Toy Run this year will be over – but make plans for next year or check the calendar section in here for other similar events this month. There’s always some sort of charitable ride going on, even in December, and if it’s not a ride, it’s a gathering, or party where the admission is a new toy, and many dealers have giving trees for needy kids in their lobby. The options are endless if you look for them.
But I still don’t have an answer to my question. What is it that makes bikers some of the most giving people I know? I don’t have a really good answer. The only thing I can think of is that it is a result of the joy we all feel when we are riding, and the smiles on our faces when we hop off our bike after a great ride. It’s infectious, it makes you feel good about life and no matter how awful things are, a ride makes you feel good. We wanna share that feeling with everyone we meet, even if they can’t ride. Our rides make us happy – we want everyone to feel that way, so we work to make it happen. We give to make folks happy when they are down. To put a smile on their face that matches the one we get when we ride. Maybe that’s it. I don’t know, but it makes sense to me.
You can reach Gary at roadsigns@comcast.net, and his blog can be found at http://grgardner.livejournal.com
Subscribe