Just sent in my December column to the editor, so it's time to post the November one. Can't believe the year is winding down so fast! 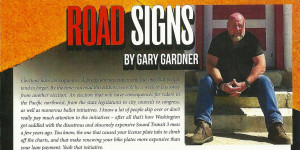 Elections have consequences. A pretty obvious statement, but one that people tend to forget. By the time you read this edition, we will be a week or less away from another election. An election that will have consequences for riders in the Pacific Northwest, from the state legislatures to city councils to congress, as well as numerous ballot initiatives. I know a lot of people skip over or don’t really pay much attention to the initiatives – after all that’s how Washington got saddled with the disastrous and obscenely expensive Sound Transit 3 mess a few years ago. You know, the one that caused your license plate tabs to climb off the charts, and that make renewing your bike plates more expensive than your loan payment. Yeah that initiative.

If you aren’t careful, and you don’t read it closely, there’s another hidden little monster on your ballot this fall in Washington. It’s the “Carbon Tax”, known as I-1631. Now on the ballot it’s not called a “tax”, but rather a “fee”. In fact, the question on the ballot says: “This measure would charge pollution fees on sources of greenhouse gas pollutants and use the revenue to reduce pollution, promote clean energy, and address climate impacts, under oversight of a public board.” The proponents think that by calling it a “fee” not a tax that you’ll be fooled into voting for it, just like with the Sound Transit “car tab fee” increase.

Now, why as riders should we care?  Two reasons. The net effect of this would be to further increase the gas tax, already the third highest in the nation behind Pennsylvania and California, another whopping 14 cents per gallon.  Let that sink in.  And while that will add about .72 cents to the cost of a fill-up on a six-gallon tank Harley Ultra, just think what that will add to the cost of your 20-gallon car every time you fill up on top of that!  Not to mention the additional cost added on to the price of everything that emits carbon, from the natural gas that heats our homes and runs our busses, and even fuels many power plants, to the diesel fuel that is used in railroad locomotives and trucks that deliver our food and goods.

This tax – err, “fee” – is expected to raise up to $1 BILLION, that’s with a “B”, and climb as it increases $2 per ton plus inflation each year. That .14 cents per gallon increases is based on the initial $15 per ton. Add $2 and change a year to that and each year the gas tax will climb about 10% more.  Fourteen cents becomes sixteen, which then becomes nineteen etc, in perpetuity! And what becomes of all that money? Well it doesn’t go to making the roads better or traffic flow more smoothly – something that would reduce carbon output much more significantly. It falls under the control of a board of “citizens” appointed by the governor. Fifteen unelected people will then get to divvy up that pot of money on any flaky hair-brained scheme they come up with. They are not accountable to the citizens in any way.

Still not convinced?  Consider this. As gas prices rise, the pressure to reduce the price then increases. The easiest way to reduce them is to add ethanol to the mix. The EPA announced in October that they are rewriting the rules to allow for additional ethanol – up to 15%, at the direction of the President. You know what 15% ethanol will do to an air-cooled Harley motor?  It’s not pretty. It eats up gasket seals, and it burns hotter than regular gas. Harley’s with their air-cooled engines will burn up. The likelihood of increased ethanol is why Harley developed those partially liquid cooled larger Milwaukee Eight engines. The easiest way to reduce tail-pipe emissions is to burn hotter and with more ethanol. On any older Harley engine, it’s going to destroy it. This is why the Motorcycle Riders Federation and other motorcycle advocacy groups have been working and lobbying the EPA to not go to E-15 fuel.

But the demand for lower cost fuel, coupled with the cry from corn farmers in the Midwest who have been hit hard with the trade war with China, is putting pressure on the EPA to adopt E-15. If Washington increases its fuel tax by .14 cents per gallon, that pressure further increases to do something easy to lower fuels costs. Say hello to widespread E-15, making those long trips where gas is scarce, harder to find something that will not destroy your rides engine. The EPA wants to also allow its sale year-round, not just winter months. But in the summer that high of ethanol causes more pollution not less. But we gotta make the farmers happy and consumers happy with lower gas prices. That is until they have higher engine repair bills that eat up those meager savings.

So yes, elections do have consequences. Pay attention to what’s on the ballot this fall and know what you are voting for or against -- especially those pesky initiatives. And keep a close watch on your wallet, as well as your motor!