I'm sad that I'm not writing essays and blog entries these days. Looking back, all I've posted this year are my QT columns. I've got lots of things I've started, just never finished -- including my book.  Life seems to get in the way. One day... Meanwhile, here's the July column, which, if I do say so myself, is one of my favorites. It was actually written some time ago as a blog post on here, and when I needed a column idea for July I reached back and revamped this for the magazine. I've lost track of the young man in this piece, he just dissapeared from Seattle before I moved to the desert... I hope you enjoy.

My friend Dan is deaf. And while I knew that, I didn’t really know him, and I really couldn’t say he was a “friend”, just a young guy who hangs out at the same neighborhood tavern I do from time to time. I’d see him standing in the corner with a few other deaf folks and they’d have very spirited and animated sign language conversations.  I often joked that when the bar gets hot and stuffy that I'm going to go stand by the deaf crowd and cool off from the breeze created by all their hand movements.


The other night I rode out for a drink, and Dan waved as I came in and went hang up my motorcycle jacket. After I did that he came up and made a sign like riding a motorcycle -- his fists in the air, cranking the throttle. I nodded yes I rode. He pointed to the door I guess asking if the bike was out there, so I nodded yes.  He gave me a look that I took as if asking "can we look at it?" and I nodded and motioned to the door and he followed me. He saw the bike and let out an "AHHH" and gave me a thumbs up with a huge smile. So I sat on the bike and patted the back seat with my hands and invited him to hop on. At first he was a bit hesitant, but I motioned "come on" and patted the seat again. He grinned and climbed on and started the bike up. Now this bike is LOUD, but I'm sure he couldn't hear a thing, but I bet he felt the big V-Twin rev up because he let out a laugh - making a sound almost like an infant would. It's the only sound I've ever heard him make other than the "Ahh" when he first saw the bike.    I backed the bike out, and although he didn't have a helmet, we went a few blocks around the neighborhood. He held on to me so tight I couldn’t breathe and I could hear him laughing with pure joy as we rode around for about 10 minutes and I'd rev the engine at the stop lights. When we got back to the bar he hopped off, jumped up and down, and practically danced with delight as he waited for me to stop the bike and climb off. He grabbed me by the arm and pulled me back into the bar to the middle of the deaf group and started to wildly sign. They signed back, and introduced me to his friends, one of whom is somewhat able to speak and who said I had made his night and it was his first ever ride on a motorcycle. He was grinning still, as I headed to the bar for my drink.


A bit later I was ready to go, so I got my jacket from the coat check and Dan came up and grabbed my coat and tried to sign something I couldn't understand, and I gave him a puzzled look. He got out his phone and with the keyboard and typed out a note on the screen; "You go now?" And I nodded yes. He grabbed my arm and pulled me towards the deaf group again where there was much signing and a very "loud" but silent conversation. He got his friends camera which he pointed to me and to the door, and then lead the entire group of deaf folks out. He wanted to show it to them and have a picture on the bike. So surrounded by a group of deaf folks, I watched as Dan pointed at the bike, gave a thumbs up, and I climbed on, started the bike and all of them put their hands on the tank to feel the vibrations. I invited Dan to join me and there was no hesitation whatsoever this time, as he hopped right on and handed the camera to his friend. 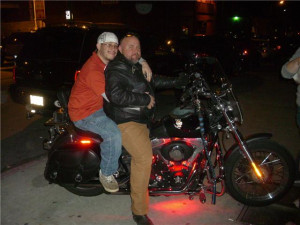 I turned around and said "want to go again?" He nodded wildly yes, so once again we did the loop to the park and around, him hanging on to the seat loop strap this time and laughing out loud the whole way. When we got back to the bar I asked him to email me the picture, so I gave him my phone number so he can text me and my email address.
The next afternoon I got a text from him: "Hi, it's Dan - thanks again for the ride on your bike, it was sooooo cool." So I texted him back, and said it was my pleasure and anytime he wanted to go for a ride to let me know. He asked if I was serious and I texted back "hell yeah!" Well, long and short of it, later that afternoon I rode up to Dan’s house with a helmet for him this time and we took off again. We headed out around the foothills of the Cascades and down near Enumclaw where we saw Mt. Rainier. When we came around a corner and there was the Mountain looming in front of us he tapped my shoulder and gave me a thumbs up and signaled to stop so he could take a picture. It was one of those perfect Washington days and the Mountain was out in all it's glory.

We continued on our way, and actually spent about 3 hours and did well over 120 miles that afternoon. Neither of us said a word. I was alone with my thoughts as I usually am on the bike - even when riding with someone. When riding with someone you communicate (with hand signals) or chat when stopped at traffic signals, whether they be a passenger or a fellow rider. But this time there was no talking --  however I wasn't alone at all. The only sound I heard was the bike and the wind -- he heard nothing at all, but I know he felt the wind in his face, the sun on his skin, and breathed deep the smell of the fresh air just like I did. He held tight to the seat strap loop, laughed when we went fast around curves, sighed when he saw Mt. Rainier and waved at all the bikers we passed like a he'd been riding all his life. I think we both hated it when I turned back towards his house. We got back to his house and his mother came out and told me that Dan had been a bit down and that since we’d gone riding that night at the bar, he’d been excited and happy and it was the best gift he’d been given in some time. You know I never really thought of it as a “gift”, but I guess the time and the experience was to someone who had never had it.

Dan wildly shook my hand and I got a back slap hug. I got out my phone and typed out a message -- "We'll do this again soon". He lit up and grinned, and before I got home there was a text message saying "I'm free next Saturday before 4pm". Weather permitting, I think my new friend and I will go ride and enjoy the sound of silence.

Gary can be reached at roadsigns@comcast.net and you can read his blog at http://grgardner.livejournal.com
Subscribe