There's nothing better than a long windy lonely road with no traffic. They are getting increasingly hard to find unfortunately. But there's still a few out there.  This month we take a look at Washingotn State's lonliest road...out in the wheat fields of the Palouse in SE Washington.... 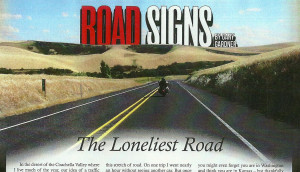 In the desert of the Coachella Valley where I live much of the year, our idea of a traffic jam is more than 10 cars at a light, or more than one change of the light to get through it. It’s that way a little bit of the year, in the high tourist seasons of mid-winter when it’s 80 degrees there and minus double digits elsewhere in the country. You get very used to no traffic, and so, as my friends will joke, when I have to go into God awful traffic areas like the SoCal/Los Angeles area it requires extra high-blood pressure medicine or maybe a medicinal edible on my part, and another driver so all I do is sit in the passenger seat and grit my teeth.  Even then I’ve been known to pout and throw a tantrum.  I’ve also been known to take extreme long-ways to get to San Diego or elsewhere in California on the bike just to avoid LA freeways.

Back in Seattle, it’s impossible to avoid as well. Traffic in the Northwest just keeps getting worse and worse and worse. It really shouldn’t take an hour and a half to get across Seattle in the middle of the day, but it does and it’s routine, and we become “used” to it. I have friends who say, “hey it only took me two hours to get home today!” Like this is something to crow about?  This is not good people. We shouldn’t get “used” to this, just like we shouldn’t get used to having a President who only lied three times today rather than his average five and we aren’t outraged by it. It’s the same thing.

That’s why I seek out lonely roads. There is nothing better than having the road all to one’s self. The most famous of the lonely roads of course is US-50 across Nevada. It’s marked on the maps and marketed as the “Loneliest Road In America”, and it’s a popular biker road. I’ve ridden it several times across the middle of Nevada. It’s kind of unnerving until you get used to it. There’s little or no cell service, and only an occasional gas station on this stretch of road. On one trip I went nearly an hour without seeing another car. But once you’ve done it, finding two or more cars at any given time becomes unnerving. It’s why I love that road.

But driving south to Nevada from the Northwest is a multi-day trip just to enjoy the solitude of the highway and America’s Loneliest Road. So, what’s an alternative closer to home? What, do you ask, is the Loneliest Road In Washington? 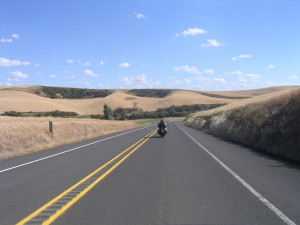 According to Geotab, a Canadian company who specializes in vehicle tracking and management, the loneliest road in Washington is SR-127 out in the Palouse of southeastern Washington – specifically between the towns of Dusty and Dodge.  You may have ridden through Dodge if you’ve traveled US-12 between Lewiston, ID and Walla Walla on your way to or from Sturgis.  If you sneezed or blinked while riding through you probably missed it too. But if you were to turn north in Dodge and rode up to Dusty, a distance of 28 miles or so, you’d be on Washington’s least trafficked road. You may even pass a car, but it’s doubtful.

What you would see is plenty of wheat fields rolling off to the horizon.  The Palouse area is one of my favorite parts of Washington. I love riding through it, especially in the spring when the wheat is still green, and in the fall when it’s turned golden. The hills are gentle, the road rolls along and undulates with the land, going up and down and around, moving with the earth. At harvest time you’ll see giant combines who’s rotating blades keep time with whatever song is running in your head, harvesting miles and miles of wheat. For a bit you might even forget you are in Washington and think you are in Kansas – but thankfully there’s no tornados here.

It’s an old road too – one of the earliest in the State to be named/numbered and even paved. It was once called the Inland Empire Highway, and it wound through small wheat growing towns all over central and eastern Washington. It was first named in 1913 and it was gravel, running from near Cle Elum up to Laurier on the Canadian border in Ferry County (which gets its name from a former governor of Washington, not from any boat across a body of water). At one time it went through Ellensburg, Yakima, Pasco, Walla Walla, Spokane and Colville.  Back then it was gravel, but in 1931 most of it was listed as “oil-macadam” – today we’d call that chip-seal.

The bridge across the Snake River was built in 1924, and replaced in 1968 with a large new bridge which is worth a stop on either end just to admire its structure and the crossing of this giant river.  You can wander all over the Palouse on roads just like this one – including US-12 which is a great road that will take you all the way across the upper Midwest if you want – or at least to Sturgis if you are going this year.

But if you are looking for solitude – of having the road to yourself – without driving all the way to Nevada for the “official” one, and of staking claim to the loneliest road in Washington, you can. It’s SR-127.