Struggling with getting my May column done -- one of those "I can't think of anything to write about" days, and I start things, get a paragraph or two in and go ... "Nope!".   Got the rest of the morning to figure it out.  Meanwhile, here's the April version of my monthly muse.... 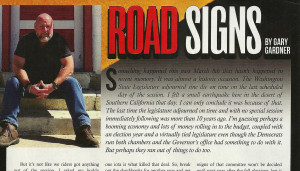 Something happened this past March 8th that hasn’t happened in recent memory. It was almost a historic occasion. The Washington State Legislature adjourned sine die on time on the last scheduled day of the session. I felt a small earthquake here in the desert of Southern California that day. I can only conclude it was because of that. The last time the legislature adjourned on time and with no special session immediately following was more than 10 years ago. I’m guessing perhaps a booming economy and lots of money rolling in to the budget, coupled with an election year and a virtually tied legislature even though the Democrats run both chambers and the Governor’s office had something to do with it. But perhaps they ran out of things to do too.

But it’s not like we riders got anything out of the session. I asked my buddy Larry Walker who’s the lobbyist for the Washington Road Riders Association if anything interesting passed in the final days. “Not a damn thing” he replied. And that’s unfortunate, because again riders get the short end of the stick.

As much talk as there was in the halls of Olympia about having to “do something” to provide relief for the out of control cost of licensing vehicles in the Sound Transit district, nothing happened. We’ve all seen the fruits of that ST3 tax and how it’s caused our license plate renewals to skyrocket.  But the inability to fix this one kinda surprised me to be honest. The vox populi have been very loud and rightfully very upset about how outrageously expensive the cost of licensing a vehicle is nowadays, and the majority support in the legislature for “doing something”, in the end got nothing done. The Democrats actually have the nerve to blame Republicans for threatening to “filibuster” the Democrat’s “fix” which albeit minuscule was some relief from that outrageously high tax burden. But a filibuster isn’t allowed under Washington’s legislative rules, so we should hashtag that excuse as a real instance of “fakenews”.  In reality the pressure by Sound Transit and their allies to fully fund their expensive system and not delay it or scale it back by one iota is what killed that deal. So, break out the checkbooks for another year and get ready to pay through the nose when your car and bike tabs come up for renewal. And remember why that is come election time in November.

All the other bills that would concern us riders also fell by the wayside. No fix to the toll reader/HOT lane transponder issue on I-405. No ability to park multiple bikes in a metered spot as long as each pays for its time. No new spending on smoothing out roads and fixing infrastructure. And no helmet law revisions. For now.

The end of the session also brought a number of retirements of long-time legislative leaders, including House Transportation Chairwoman Judy Clibborn. Rep. Clibborn and I have been friends for a long time, and she’s been very good for overall transportation policy in the state the years she has headed the powerful committee. And what’s more, she’s a genuinely decent, honest, kind and honorable person. The kind that we need more of in public service, and it seems that are few and far between these days. I am sad she is going, Washington will miss her, and I will wish her well. And while Rep. Clibborn hasn’t been a champion for rider issues, with one big exception, she hasn’t been overtly hostile either. But she has been adamant in her opposition to repealing or modifying the helmet law in Washington. It’s the main reason that even when the bill has advanced in the Senate in years past, it was essentially DOA in the House. Whether that gave the Senate some cover to pass the bill along in years past or not remains to be seen. But if the House Transportation chairmanship passes to someone who may be supportive of helmet law repeal or modification, chances of that bill advancing improve. Who takes the reigns of that committee won’t be decided until next year after the fall elections, but it will be a fight for a plumb and powerful job. Let’s hope someone with some motorcycle experience and who is a supporter gets the job.

So, with the Legislature hitting the road, they’ll also later this year be hitting the campaign trail. You all know the drill too. It’s a golden opportunity for you to meet with legislators and those running to replace them or fill a vacant seat. It’s your chance to make yourself heard on the rider issues that concern you, whatever they may be. There are more than enough chances to get to meet them this year if you just take the chance. The more of us who “live to ride, ride to live” that do this the better off we’ll all be down the road, whether it be the amount of money we pay to license our rides, the quality of the road we ride down, the amount of traffic we share the road with, and yes, even the type of equipment we are required to wear. Making your voice heard with those who next year will be sitting around Olympia and Salem for long legislative sessions now will bear fruit then. I promise you.