Here is my March column in QuickThrottle -- in which we discuss the silliness that is Harley-Davidson's creating an electrick motorcycle... No.  Just no. 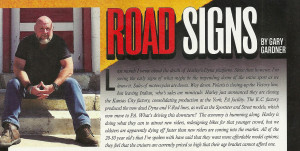 Last month I wrote about the death of Harley’s Dyna platform. Since then however, I’m seeing the early signs of what might be the impending doom of the entire sport as we know it. Sales of motorcycles are down. Way down. Polaris is closing-up the Victory line, but leaving Indian, who’s sales are miniscule. Harley just announced they are closing the Kansas City factory, consolidating production at the York, PA facility. The K.C. factory produced the now dead Dyna and V-Rod lines, as well as the Sportster and Street models, which now move to PA. What’s driving this downturn?  The economy is humming along. Harley is doing what they can to attract new riders, redesigning bikes for that younger crowd, but we oldsters are apparently dying off faster than new riders are coming into the market. My gut tells me that Harley’s top of the line massive cruisers are priced so high they keep folks out of the market. But what do I know?

So, what’s the answer? How do you re-tool an entire sport for a new generation? How do you take a 115-year-old institution like Harley and remake it for the next 100 years? Can you? I’m glad I’m not the CEO trying to figure that one out. But in the same corporate earnings report where Harley announced the Kansas City plant closure, they also announced their apparent vision for the future – and it isn’t a traditional loud piped V-twin motor.

In about eighteen months – sometime in late 2019 if all goes well, we will see the first electric Harley-Davidson. An electric bike, as incredulous as that sounds I know.  Think back a couple of years ago to Harley’s “Project Livewire”. When I first heard about it I thought it was a joke in a satire magazine. Harley? An Electric Bike? Yeah, sure and I’m gonna trade in my Hummer on a damn Prius. But it turns “Livewire” wasn’t a fluke, even though it looks like a metric crotch rocket.

Already people are putting down deposits on something that isn’t even in production yet so they can be the first to have an electric motorcycle. I guess so they can ride to get some gluten free ice cream and a vegan salad maybe, and park it next to their Prius or Tesla. It makes sense and should sell wonderfully in the Northwest. According to Toyota, Washington is the highest per-capital sales market for those damn Priuses.  At least I think that’s how you pluralize it – maybe it’s Prii?  (And I just realized that these electric vehicles can’t be pluralized readily – for instance the Nissan “Leaf”. Is the plural form “Leafs” or “Leaves”?   If Harley goes forward with this they better come up with a name that can be readily pluralized.)

But there is this gross misconception about electric vehicles: that driving them makes some sort of “environmental statement” about saving the planet from terrible carbon pollution. But what most self-righteous Prius drivers seem to forget is that electricity in most parts of the world comes from burning the same fossil fuels that power a gasoline engine. In the Northwest, our power comes from hydro dams and windmills, which according to some factions of the environmental world, are just as bad as fossil fuels since dams mess with salmon and windmills are nothing but giant Cuisinarts for birds. Nothing is somehow “non-polluting.”

So, while all you electric vehicle drivers may think you are saving the planet, you actually are not making one iota of a difference. And if that’s Harley’s marketing ploy to get younger hip riders, I think they missed the mark. Younger hip riders would rather pay less than $30,000 for a bike I’m guessing. There’s your niche market guys.

Meanwhile I’ll go on enjoying my carbon spewing fossil fuel burning 103 cubic inch V-Twin rumbling between my legs and breathing in those wonderful smelling exhaust fumes as I roar out of my driveway and into the wind thank you very much.
But I know my time on earth is as limited as the fossils that fuel my engines, and one day I too will die out along with the rest of my kind (or ilk if you prefer.) The bikers of the future will be zooming around Sturgis on their electric bikes, the town will obviously have to put in some sort of massive magical power plant to produce enough plug-in stations, but that won’t be my problem. So, go forth Harley. Change the world with this first step. As a shareholder, I applaud the ingenuity and forward thinking and willingness to get out ahead of the curve. I hope it saves the company. My retirement savings will thank you.

But while I can, let me enjoy the rumble, the heat, and the smell of exhaust, and the freedom of the open road, my fists in the air framing the road ahead, and the wind blowing in my face. An electric bike? Sorry guys. Not for me.