Desert life is good -- especially this time of year. Sunny and mid 70s. I'm close to finally getting my garage cleaned out enough to park the truck in too. Been doing a lot of camping, hiking and some riding around town, but I'm due for a long ride and am itching for it.

My February QuickThrottle column tackles my impending geezerhood somewhat, as I mourn the loss of one of Harley-Davidson's iconic lines... 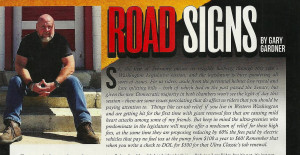 So, the first of February means its roughly halfway through this year’s Washington Legislative session, and the legislature is busy pondering all sorts of issues. For us riders, aside from the perennial helmet law repeal and lane splitting bills – both of which had in the past passed the Senate, but given the new Democratic majority in both chambers won’t see the light of day this session – there are some issues percolating that do affect us riders that you should be paying attention to.  Things like car-tab relief if you live in Western Washington and are getting hit for the first time with giant renewal fees that are causing mild heart attacks among some of my friends. But keep in mind the ultra-greenies who predominate in the legislature will maybe offer a modicum of relief for those high fees, at the same time they are proposing reducing by 60% the fees paid by electric vehicles that pay no fuel tax at the pump from $100 a year to $60! Remember that when you write a check to DOL for $500 for that Ultra Classic’s tab renewal.

There may also be some changes that would allow multiple motorcycles to share a street metered parking space, and to work around the need for a transponder to ride free in the high-occupancy toll lanes. All of these issues hit the pocketbook in one way or another, and will affect those of us who ride. Make sure you stay in contact with your rider organizations and clubs like Washington Road Riders, and ABATE, and stay involved.

And while our elected officials ponder what to do about those issues, and the other things on their plates, I’m sitting her pondering my ever encroaching apparent geezerhood. It’s coming from the fact that Harley-Davidson has discontinued the Dyna platform in 2018 and I’m a long-time Dyna rider. Dyna’s have been my preferred big-twin bike since, well, since I could legally ride. Over the years, I’ve owned many a Milwaukee product across all their lines. I’ve loved them all, but I’ve always loved Dynas the most. I kinda feel like the old bikers I knew when I was a young buck, who would lament and cry over the loss of their shovel-heads and pan-heads and wish they were still in production. I’d roll my eyes at them I suppose like new younger riders will do to me in a few years when they look over at my twin-outside shock ride with its square battery box on the side, rubber mounted engine and its rugged frame and wonder about that “old dude on the antique bike” just like I used to.

In some of the articles I’ve read in the trade press about the end of the Dyna era, they’ve described those of us who prefer the Dyna platform as “purists”, which is what I used to call shovel and knuckle head riders back in the day. And now I’m one of them I guess. I always loved the vibration that Dynas had due to the rubber mounted engine, especially at a stop light. And I’ve always felt much more confident in the curves and bumps with the twin shocks than I did on a Softail. Hell, the last Softail I had, a modified Rocker that I chopped, I couldn’t corner worth a damn in it – kinda like steering the Titanic, I’d have to start a turn a block before I needed to just to get it to corner. Touring bikes, while they felt great on long rides, I’ve never found them to be as responsive as a Dyna, and I love to carve a turn.

I have more fond memories of trips on my Dyna (and even my Sporster, which face it is just a mini-Dyna) than I do on my Softail or Touring bikes. My beloved Angus is a Dyna, and we’ve gone Coast to Coast and Border to Border together. And my other bike these days is Bandit, my Nightster which is so responsive that if I even think of carving a turn I’m half way through it. I’ve never had that kinda fun in a Softail or a Touring bike.

So, as I thumb through the catalogue of the 2018s I see that the boys in the Milwaukee styling shop have done a fair job of making the Fat Bob, Street Bob and Low Rider kinda look like the old Dynas. Maybe no one will notice. No one except us “purists” I suppose. I look at them and see some elements of the Dyna, but where’s the damn battery box on the side? And that curved oil tank under the seat just doesn’t look right, and no shocks! Nope, you can call it a Fat Bob, or a Street Bob or a Low Rider, but it’s not, it’s just not.  I almost wish they’d have retired the name along with the frame.

I’ll ride Angus as long as I can and as long as I can make reasonably inexpensive repairs to him, which should be a good while. But when he’s gone I’ll miss that vibration that those old rubber mounts give, and I’ll miss the ground hugging I’d feel throttling up as the twin shocks did their magic as I sunk into a nice turn. Everything eventually changes, and the fact that I struggle with it is further evidence of my slide into geezerhood.

And I’m sure many of you have just as fond a memory of your favorite Heritage Softail or Deuce, or Breakout. You’ll probably even tell me that it’s my riding skills not the bike – that your Softail corners better than any Dyna, or that a Dyna rides too hard for you. And that’s cool too, you have your opinion and I have mine and we’ll all be happy riding off to Cumberland together for Taco Thursday come spring. But when we get there, I’ll likely find a cadre of fellow geezers and we’ll cry over the loss of our Dyna’s over in a corner for a while. We’ll be the pan-heads and shovel-heads of the next generation down the road when the Dyna is forgotten and we’ll have to scour junkyards for parts. Just don’t laugh and make fun of us old farts on our old bikes will ‘ya?