Here we go again, the start of another new year. The Washington Legislature started it's session yesterday, and I'm happy to be out of that mess. We are enjoying a much needed rain shower here in the desert today -- its not rained since September. It makes the desert smell wonderful, and I'm cozy in my house watching the raindrops hit the pool and trying to figure out what to write for my February column. And while I struggle with that, I'll post the January one, which by the way, in case you can't tell, is just a wee bit sarcastic.... 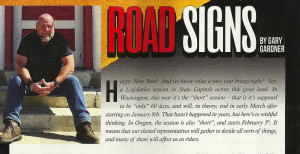 Happy New Year!  And we know what a new year brings right?  Yep, a Legislative session in State Capitols across this great land. In Washington, this year it’s the “short” session – that is it’s supposed to be “only” 60 days, and will, in theory, end in early March after starting on January 8th. That hasn’t happened in years, but here’s to wishful thinking. In Oregon, the session is also “short”, and starts February 5th. It means that our elected representatives will gather to decide all sorts of things, and many of them will affect us as riders.

In all the years that I’ve been writing Road Signs I’ve always stressed how important it is for riders to get involved, either on their own – engaging and letting their own representatives know how they feel about issues, or as part of the many rider advocacy groups or ideally both. Each year the advocacy group ABATE of Washington sponsors Black Thursday, a day for riders to gather at the capitol and make their voices heard. This year it’s on January 18th. Weather permitting, you should ride your butt to Olympia and take part. You are welcome to go even if you aren’t a part of ABATE or any of the groups.

And while it’s a bit early to know exactly what issues may pop up this session, I know of a few that are pretty likely. Parking equity – i.e. allowing more than one bike in a parking spot should come up, hell I hope it does. This simple fix would go a long way to solving those parking issues in Seattle. There’s the dreaded High Occupancy Toll Lanes charge and whether or not you need a transponder to ride in them, not to mention the high cost that has car drivers screaming is something that’s likely to be addressed. I also expect the legislature to attempt (whether they actually do something is another story) to address the high cost of car tab fees in the Sound Transit jurisdiction. And who knows, maybe they’ll again tackle lane-splitting.

And for certain – as certain as salmon return to the stream where they spawned – there will be a helmet law repeal bill.  It’s great that ABATE still pushes this – it is pretty much why the organization was formed. However as much as I personally support a riders right to choose whether or not to wear a helmet, the arguments to date for giving riders that choice unfortunately have not been persuasive to the legislature. Until maybe now.

You see now we have the bicycle folks making the argument for us!  And we all know how the bicycle cadre gets damn near pretty much everything they want these days. It’s absolutely ironic, not to mention hysterically funny to read the weeping, wailing and hand wringing of the pedal bike crowd as they bemoan the fact that the apparent reason the bike-share program in Seattle failed miserably is because it required riders to wear a helmet! It wasn’t the steep hills, or the perpetually wet skies, or even the atrocious traffic that kept folks from using bike-share, it was the helmet requirement – a law in King County and in the city of Seattle.  And since Seattle tends to worship at the altar of those who ride the skinny tired contraptions, their arguments get some traction.

So, I’m guessing that the “law” that bike riders wear a helmet is somewhat more of a “suggestion” these days in Seattle. Three new bike-share companies have popped up to replace the one the city itself invested a few million tax payer dollars in that failed miserably. Despite the law, none require riders to wear a helmet. The city has only required that the companies “inform” riders of the law, not that they provide them with a helmet. Seattle and King County are the only major metropolitan areas with a bike helmet law, and police officers can cite riders without them – it’s a whopping $30 fine. Contemplate that next time the Highway Patrol pulls you over and looks over your helmet for a DOT sticker.

And helmets are apparently not what bike share advocates are suggesting needs to be focused on when it comes to bike safety at all. The real cause of injuries, crashes, and collisions outside of rider error, are, (get this) “cars and distracted drivers.” Hmmm, now where have I heard those exact statistics and that argument before? Aren’t those the leading cause of accidents to motorcycle riders too?  Hello??? They even have studies that show helmets make a minor contribution to cyclist safety. Wait a minute, don’t we have those studies and been saying that too? And they even tout that bike-share systems have been around for almost a decade all over the country, how many people have died using bike-shares in that time? Two. After millions of trips. Two.

So, is what’s good for the goose good for the gander? Can our rider groups take these same arguments and demand rider equity? Can ABATE and the rider advocacy groups learn from our other two-wheeled riding friends and perhaps sway lawmakers like the bike riders seem to have done?  Maybe if we all wear spandex on Black Thursday instead of leather, and instead of beards and long flowing hair (for those that have it) we all sport man-bun hairdos and hipster beards, and we show up driving a Prius instead of a pick-up truck, could we possibly get lawmakers attention?  Couldn’t hurt right?  Well maybe the spandex could hurt.  I don’t think I could squeeze into anything that tight, and if I could it would surely hurt the eyeballs of everyone around who looked at me. But hey, they seem to have won the helmet argument where we can’t. I think we need to join forces with our spandex wearing brothers and sisters. After all, the reason they ride are pretty much the same reasons we do, and they hate their helmet law like we hate ours. We probably have more in common than we think.