I really never have understood why police officers and their union tend to band together regardless of how bad an actor they may have in their ranks. Last summer a clearly rogue police officer with multiple complaints against him for road rage, lost it with a biker who was fortunate enough to film him with a helmet cam. And despite this, and despite a personal apology from the King County Sheriff, the officer has yet to be disciplined and remains on paid leave. We clearly need more civilian oversight of the police, and that is the topic of my last column this year in QuickThrottle. (BTW, I've gotten a few comments from readers about my new column photo -- it's not too bad on this month's header...) 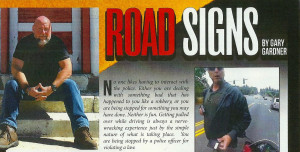 No one likes having to interact with the police. Either you are dealing with something bad that has happened to you like a robbery, or you are being stopped for something you may have done. Neither is fun. Getting pulled over while driving is always a nerve-wracking experience just by the simple nature of what is taking place.  You are being stopped by a police officer for violating a law. You look back, see the lights flashing, you wonder “what have I done?” and start to pull over to the side of the road. A rather intimidating person then walks up and starts to question you while you nervously hand over your driver’s license, insurance information and vehicle registration. You try to smile through your nervousness. You have a sinking feeling. You might be lucky and just get a lecture or a warning, or you might get slapped with a huge fine depending on the mood of the officer and the nature of the violation. And that’s when the officer is going by the book and doing what he was trained and what we pay him to do. We’ve all been there -- some of us more than others.
But imagine being in a similar situation only with a rogue officer who is clearly out of control, is not acting according to established protocol, and all while you are sitting on your motorcycle in traffic. This is what happened to a rider by the name of Alex Randall in the Seattle area this summer.  Fortunately for all of us, he was wearing a Go-Pro camera on his helmet that filmed the entire encounter, then uploaded it to You Tube where it went viral and was broadcast widely on both local and national media.  If you haven’t seen it, here’s the URL:  https://www.youtube.com/watch?v=YSNb6NPoCy0

The “officer” (and I use that term loosely as he is in no way acting as a true officer would) has been identified as a King County Sheriff detective named Richard Rowe. He has worked for the King County Sheriff’s office for 19 years, and is currently assigned to the Woodinville Police Department which is staffed by the KCSO. King County Sheriff John Urquhart, who lost his seat in last month’s election, was so disturbed by the video that he personally called Randall and apologized, and promptly placed Rowe on “Administrative Leave” while the incident is investigated.

It’s now four months later – so where do things stand now? Unfortunately still in limbo. Nothing has happened, except that the King County Prosecutor has declined to press criminal charges. I’ve not yet heard back from the King County Prosecutors office as to why that determination was made. The administrative investigation being conducted by the Sheriff’s office is still ongoing, and a final determination of any disciplinary action against Rowe is still weeks away (as of press time in mid November) and may even be left up to the new incoming Sheriff. 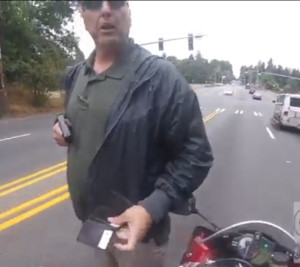 Meanwhile, Rowe is still on administrative leave, drawing a paycheck for the last four months, sitting at home, while the King County Sheriff’s office continues the investigation. Turns out however that Rowe has had three other complaints filed against him for similar conduct in the past and, guess what?  Yep, he was never disciplined. Here we have an obviously unsuitable officer that is allowed to continue on the force.  Surprise! There’s that “thin blue line” again, bolstered by the wall of police officer unions. If I were a police officer or union official I’d be mad as hell, just as the Sheriff was, that someone like Rowe continues to be employed, represented by my union, and smearing the reputation of the department and the vast majority of officers who are upstanding if not heroic in their jobs.

It’s going to be hard to ignore this incident I hope – it was captured on video for all to see. Mr. Randall is fortunate that he recorded the encounter, otherwise he’d have no proof. I’m seeing a lot of riders wearing these cameras now. I own a couple and have made some nice fun videos, but don’t want to wear one on top of my helmet all the time, but maybe we all should. At least until it’s mandated that all police officers wear body cameras. It’s unfortunate that it appears body cams are going to be a sad necessity to prove cases like this – both for the citizens making a valid complaint and for the officer who’s wrongly accused.

Down the road what is also needed is more civilian oversight of the police force. Limited oversight of officer misconduct complaints in the King County Sheriff’s office are handled by the King County Office of Law Enforcement Oversight (OLEO), which reports to the King County Council. In King County it works like this: when someone makes a complaint against an officer, it is the Internal Investigation Unit that first classifies the complaint in one of three categories, but only the most serious one results in an investigation and disciplinary action, the other two do not. However, it is the officer’s compatriots who make those decisions, both classification and conducting the investigation. There is not an independent outside body involved at all.  Perhaps that needs to change.

One way to fix some of these problems would be to put some civilian oversight on the complaint process and investigation. Legislation to do just that – to allow the OLEO to have more involvement and oversight in the process passed the King County Council, but since then has been tied up in collective bargaining with the union representing officers. Our riding groups and their representatives were successful a few years ago with legislation on the state level prohibiting profiling of bikers by police. Maybe they should get involved in getting more civilian oversight of our police forces as well.