June was a busy month, and was lucky enough to tour the National Parks of Utah with some friends from the UK. I'm writing about that, but it's slow goinging.  The muse is fickle. In the mean time I have actual paid writing to get done like my column for Quick Throttle. Here is my June one. I'm hoping my friends in Oregon are still speaking to me after this slap at their odd-ball gas pump laws. I'll hopefully be back up that way for a visit in August. 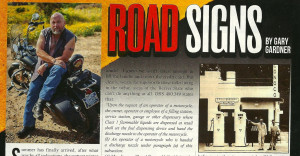 Summer has finally arrived, after what was by all indications, the wettest winter on record in the Northwest. Time to hit the road on the bike, dry out and explore. Time to wander down a new road until the gas tank drops to near empty. Then pull into a nearby gas station and grab the pump handle fill up for another round. Except in Oregon. I’ve never figured out exactly why Oregon (and New Jersey) think we are all too stupid or inept or clumsy to pump our own fuel. For crying out loud I was pumping gas for my Mom back in the early 60s when I was about 6 years old and we had Ethyl and Regular! It’s not complicated. Except in Oregon. But that could change soon.

What do bikers and the residents of a few rural Oregon counties have in common? Well, apparently, according to the Oregon Legislature, we are all now smart enough to be able to pump our own gas!  How about that?! The legislators inhabiting the capitol in Salem actually passed legislation to allow the residents of some fifteen counties in rural Oregon to pump their own gas. We bikers, and citizens of those few counties, are clearly smarter, and physically adept enough – unlike the residents of say, Portlandia, to be able to remove a gas cap, lift a pump nozzle off a rack, insert it into the opening of the car, insert a credit card in a slot and pull it out, and then squeeze the nozzle to allow fuel to be dispensed and then return said nozzle to its rack.

Bikers have been able to do this for some time already, except for the lift the pump nozzle, and insert the credit card part. It’s explicitly spelled out in law what we can and cannot touch!  I guess we aren’t smart enough to lift the handle and insert the credit card. But clearly, we are far superior to those folks living in the urban areas of the Beaver State who can’t do anything at all. ORS 480.349 states that:

And now in those few small population counties I guess we’ll even be able to handle all parts of the transaction all by ourselves just like the hardscrabble farmers and ranchers that live in the rural outback. And face it, that’s where the really cool roads are anyway. Back in 1951, when Oregon first mandated that only trained station workers could put “Class 1 flammable liquids” into cars, the state mainly didn’t want people accidentally blowing things up. Even after gas station technology improved, the argument was extended to include employment considerations and interesting provisions worrying that small children and the elderly would be put at “unreasonable discomfort” if forced to pump their own gasoline.  Last year the Legislature allowed for self-service pumping in some rural counties at night when the station was closed if the pump was a modern credit card activated one (and when was the last time you saw one that wasn’t except in a museum or the restored one in my garage?) And now later this year folks in those counties can do it 24/7! Welcome to the modern age.

But this monumental change wasn’t made without a fight, although the votes in the legislature were nearly unanimous. "Today I voted for limited self-service gas in extremely rural areas late at night," Sen. Sara Gelser D-Corvallis tweeted. "Am I still a real Oregonian?" The most common argument, aside from a ludicrous safety and environmental impact ones that no one really believes, is that it creates jobs. Well so do buggy whip makers, although we don’t need those anymore. Reading the comments in the online versions of the Oregonian paper made me cringe as much as reading the Seattle Times political section does these days. “I simply don’t understand people that are so hell bent to pump their own gas, I drive all over the nation and find it annoying as all hell to pump your own gas.”  Maybe they are related to Thurston Howell III.  “Heck yea, let’s get business and oil companies make bigger bucks while taking jobs.” “First self-service check outs at the grocery store and now this, no wonder we have homeless folks all over.” 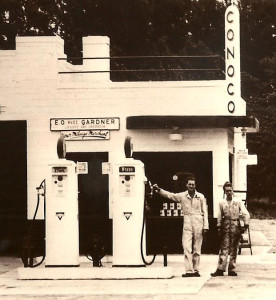 Not that there is anything wrong with being a pump jockey, my own father was one, working at my grandfather’s filling station on old US-91 in Nephi, Utah back in the 1940s. Back then EVERYONE got full service – gas, oil check, tire check, windshield wash and usually a smile too. But those days are long gone.

So, welcome to the modern era rural Oregon! All you hipsters and yuppies in Porlandia still have to sit and wait for someone to fill you up. But rural Oregon, well you can join company with us smart bikers and drivers in the rest of the country who can handle a gas pump. It’s not that hard! Well I guess almost all the country -- the folks in New Jersey still aren’t smart enough to pump gas yet, but I that goes without saying.