Taking a break from floating in my new pool to post the March column from Quick Throttle...

Well the Washington and Oregon State Legislatures have been busy as little beavers the past few weeks as both are in the midst of the annual Legislative Hunger Games – also known as General Sessions. March is kind of a good half-way mark for both states, and a good time to assess what’s been going on and how it might impact us as riders.  Both Washington and Oregon are considering lane split and helmet use laws this session, and Washington is also looking at distracted driving.

Several times in this column I’ve discussed the flaws with the Washington law on cell phone use while driving and distracted driving. We’ve all been out on the roads and faced near misses by drivers who are using cell phones. I would also dare say that most of us are also guilty of using a phone while driving ourselves – including virtually if not all members of the legislature. I know I am guilty of this although it’s illegal now. And this illustrates the problem legislators have when attempting to craft a fix to the law. You can pass all the laws you want – but will it change behavior? And legislators are reluctant to pass something that affects what they do as well.

The current Washington law only applies to holding a phone to one’s ear – and to prohibiting “texting”. The law was written years ago before the advent of smart phones and hasn’t been updated. This poorly written law is essentially unenforceable and even if it were, one has to wonder if a more well crafted law would work better. Well we may find out this year.

Right now there are currently several bills working their way through the session in Olympia, recrafting the law to prohibit use of hand-held electronic devices in all but a few situations and increasing fines for subsequent violations. This seems to be a much better approach than the current law, and, as we used to say in the lobbying business, this one “has legs.”  Because of a lot of moving testimony from victims and their families and an abundance of horror stories, there appears at this point to be substantial support in the legislature for passing something this year -- but it’s a long way through the process in the legislature and to the governor’s desk and we still have months to go. Judging by the votes in the various committees, there is only slightly more support than opposition to these measures. It’s kind of odd coming from a state that has a tendency to nag us to death on so many other things – including helmet use – that there would be so much opposition to fixing the distracted driving law.  Dollars to donuts it’s because so many legislators are guilty of this behavior as we all are.

This issue is one that has the potential to impact riders far more than helmet use, lane splitting, and all the other perennial issues that we as riders and our rider advocacy groups support year after year. And yet our rider advocacy groups are not involved in pushing this in any meaningful way if at all. Why is that? Rarely does legislation have enough support to make it through the system without an organized group or groups advocating for it. And while there are a few voices pushing the distracted driving bills, I know they could use the help and support of the riding community. Of all the legislation affecting riders this session, my instinct and past experience tells me this one has the greatest chance of being enacted. It would be a great way for the riding community to build support for our other issues by getting involved and pushing for this legislation as well. Politics is all about tit-for-tat, and I’ll scratch your back you scratch mine, and this is a win-win for riders and for legislators, (not to mention a cliché festival for column writers) so lets get our rider advocacy groups pushing this in the second half of the session. 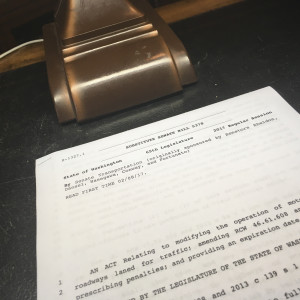 Two other proposals that affect riders have been floating about the rotunda this session as well; lane spitting and helmet law repeal.

The Lane Split proposal would allow riders to move between cars at no more than 10mph above the speed of traffic and no more than 25mph total, and only on roads of at least two lanes each direction or a physical barrier. In effect this limits lane splitting to highways and during heavy traffic jams, and keeps folks from lane splitting at 80mph on the freeways as they tend to do here in California. For those of us with air-cooled bikes this is a great bill, and will help move us through the Godawful Seattle traffic and keep us safer from rear-end collisions.  And just in case it tempts drivers to open a car door on a passing bike, such an action would be considered a traffic offence.  The bill stands a very good chance in the Senate, but uncertain in the House where the House Transportation Committee chair opposes the bill. Its very encouraging to see the bill move with the support it has – and even if it doesn’t pass this year, bringing it back in multiple years builds support over time.

The limited helmet repeal bill has died again however. This bill would have allowed riders over 18 years of age to ride without a helmet if they carried the same liability insurance as required for operating a car. The bill got a hearing in the Senate Transportation Committee and even a voice vote approving it, but failed to gather enough signatures after the committee to advance.

All of the Oregon proposals for lane splitting and helmet use have not advanced or had any hearings yet.

Yes, it’s almost half-time at the Legislative Hunger Games – and we’ve got some good proposals that will benefit riders still moving along. If they matter to you, make sure you let your elected officials, and any riders groups you belong to know about it. You can’t complain about things not happening if you don’t do your part.


Gary can be reached at roadsigns@comcast.net and you can read his blog at http://grgardner.livejournal.com
Subscribe