A long road trip to the hometowns and the love and warmth of family and old friends never seems to last long enough. This past weekend the last task of this trip -- a long loop up from the desert to Portland then Seattle, then down to Boise and Salt Lake -- was accomplished, hanging up some 24 of my prints at the Rio Grande Cafe gallery in the historic old train station in downtown SLC. This is my second year having a show here the month of January -- in a space that means a lot to me personally. This old station was one of my haunts as a teenager, watching the comings and goings of the old Rio Grande Zephyr, and eating in what was the Rio Grande Coffee Shop where my photographs now hang. After that it was time to think about heading home. Wednesday seemed to be a good day to go -- traffic would be light and the weather more or less good. 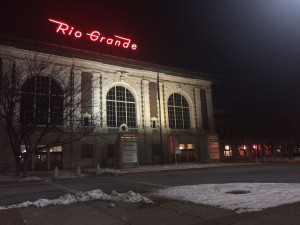 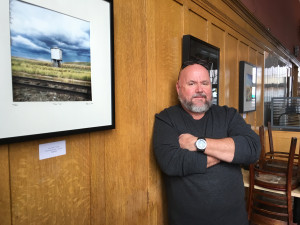 But by Tuesday the weather forecasters on Salt Lake's TV stations were all predicting a dire storm to blow in on Wednesday.  My Mother, in her Motherly wisdom, said I should "think about leaving" on Tuesday to beat the storm. But I wasn't ready to leave Salt Lake just yet, and I know me and my truck's capabilities, so I declined. Waking up Wednesday morning I'd anticipated an inch or two of new snow, but instead it was 45 degrees and a warm southerly wind was blowing in and had pushed out the pollution trapped by the inversion. So much for the uber excited weather forecasters on TV.

It's a long drive back to the desert from Salt Lake -- generally broken up into two chunks with an overnight in St. George, Utah or Las Vegas. This time I had company, as Eric had decided to fly up after Christmas and drive back with me. Mom tried to keep a dry eye as we left, but as usual she couldn't quite, and she and Ron waved goodbye from the garage as we backed down her driveway and headed towards the Interstate.

The ramp says I-15 South - Las Vegas and we curved up on to the highway and headed due South. The wind was blowing against us and it kept the temperatures above freezing and no sign of a storm all the way down past Provo and Nephi and into the vast empty lands of the Great Basin.

After a couple of hours riding the super slab we needed a stretch and a break so we pulled off in Beaver, about half-way down Utah. This is a town who's billboard on the highway coming in says "Beaver -- Home of the Best Water In Utah" apparently having won some water Academy Award. Beaver has some of my favorite road ghosts and so I had to stop and again photograph them, hoping for another award winning shot or two given the gray and somewhat ominous clouds in the sky.

It's apparent Ron appears to still be gone from "Ron's Chevrolet" on Main Street in Beaver. The ceiling is now caving in, there are cobwebs that are big enough to capture small children inside, and that old Motorcycle is still in the window, some 6 years after I first photographed this place (on the left from 2010), naming the piece "Ron's Gone". 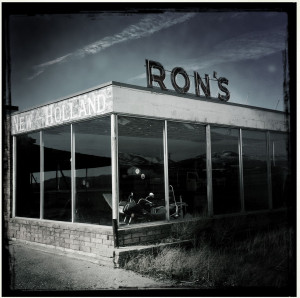 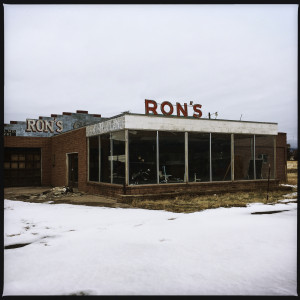 Just down the road from Ron's on Main Street -- the old US-91 -- in Beaver is Arshel's Cafe. I'd passed this place many times before but never gone in, but it was a little after noon and Eric said he could eat. We had our choice between Arshel's and the "Bambi Cafe", and he chose Arshel's. It seemed a little too pink at first glance to me, but it was full of ranch hands and the like sitting inside, all wearing insulated cammo colored gear. One was apparently driving a Prius which they had tried to make a little "sporty" by painting a racing stripe down it, but it was still a Prius and a bit jarring for one of them to be driving while eating in a pink cafe with lacy curtains, but who am I to judge.
Our waitress, an older woman with once blonde hair, said "take a seat anywhere I'll be with you in a minute." She brought over menus, and glasses of "Beaver Water" and pointed out the soup was chicken noodle - "homemade" she added. I settled on that and a BLT minus the mayo, while Eric had a tuna melt. 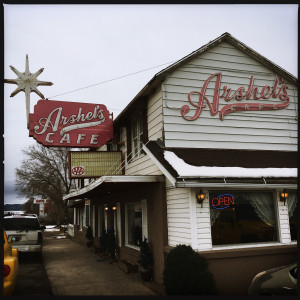 For some reason Eric and I reminded her of the movie "Hell or High Water" -- I think it was me ordering my BLT without mayo, as she started imitating the waitress in the movie by saying "tell me what you WON'T be having", and laughing about it as she took our order. Later after we'd finished she asked about desert and said, "you will both be having pie" another line from the movie. She brought us peanut-butter chocolate pie and I'm glad she did.

We ambled back out into the not-so-cold parking lot and continued south along Beaver's main drag to two other ghosts that I like to stop at on my way through. At the far south end of town, just before the road curves back and rejoins I-15, off in a field is a charming red-brick building that was either a school house or a home at one time, I'm not sure, and it sits right across from an abandoned 1950s era motel, built around a man-made pond, called the "Sleepy Lagoon". The motel and it's sign are difficult to photograph given the light and the overgrowth, but I pulled off the highway and got out of the truck while Eric waited inside. 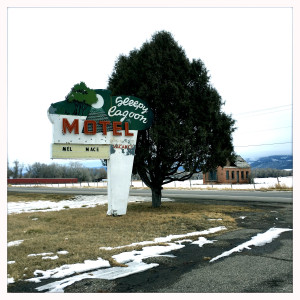 Directly across the street from the Sleepy Lagoon, in the middle of a field, is the school house or a home. Generally there are cows milling about or the light has been wrong. In years past the roof has been intact, but this year it's caving in, indicating there isn't much time left for this charming building. 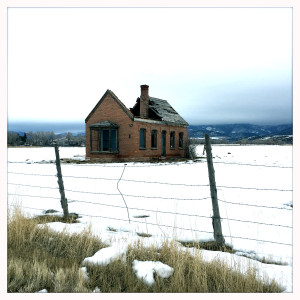 Back in the truck the food from Arshel's had taken it's toll on Eric who had come down with a case of the "itis" and was dozing in the passenger seat while I pursued my artistic endeavors, getting muddy and a bit moody wandering in the snow -- chasing my ghosts of the road while a mangy mutt and some cows chased me. I still don't have a great shot of either of these relics of the highway, but one day I will. 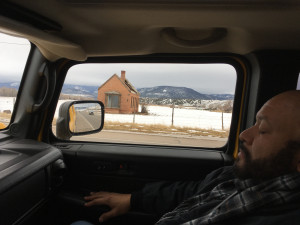 So I settled back in the cab, did my best to not wake Eric while doing a U-turn on the empty road and then headed back to the freeway, rolling southward through the vast empty lands of the Mountain West, headed towards Cedar City, St. George, Las Vegas and then home to the desert -- like a horse heading back to the barn, their warmer temperatures and sunny skies calling me home.
Subscribe