At Least Its Not Rock Springs...

I got an early start out of Seattle Tuesday morning, headed over the Cascades and into Oregon then down into Boise, Idaho. Well at least that was the plan. Seattle's atrocious traffic took some time to navigate through at 730am but once I got onto I-90 eastbound traffic was clear. The skies were cloudy and it was cold and the roads somewhat slushy in spots, especially over Snoqualmie Pass, but the weather was fine. There were more than a few cars who'd spun off the road, some fairly recently, but those of us who grew up in this weather know how to drive in it -- and that bridges and shadow spots are usually slick, and you don't brake when going over them, you just lift your foot off the gas. Apparently a lot of folks don't and they go sliding off into the ditch. 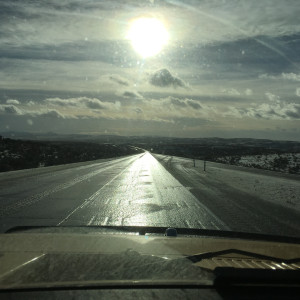 The sun came out near Yakima and stayed out all down the valley towards Richland and the Tri-Cities. Typical winter driving in this part of the country and I was comfortable in my big truck with its captain chairs and heated seats and a home-made CD of road songs to set the mood and keep me company.  My best friend Dave is always reminding me of how jealous he is of me being out on the road. Sometimes it's not so pleasant and is a chore, but today it wasn't. I was happy to be on the road, headed to see family and friends, driving down a road I knew well and in relatively nice weather. The road often feels like home, and it was today, as I sang along with Johnny Cash's "I've Been Everywhere", and started feeling wistful with Mary Fahl's "Going Home:" "I know in my bones I've been here before. The ground feels the same though the land's been torn. There's a long way to go, the stars tell me so, on this road that will take me home. Love waits for me around the bend, leads me endlessly on..."

Crossing over the Columbia River into Oregon in the early afternoon however the highway information sign informs me that the road is closed east of Pendleton. I call the road information line and learn that a storm has I-84 closed for nearly 90 miles at Pendleton because of a storm over the summit of the Blue Mountains. The only other feasible route would be US-395 South from Pendleton to John Day and then East on US-20. This route is very very isolated, and while nice on the bike in good weather, in a winter storm -- even in the Hummer -- maybe not so good. But I check it anyway, and the storm has it shut down too, with no estimated time for reopening of either route.

Fortunately the Holiday Inn Express in Pendleton is one I've stayed at many times before and they have a room and I book it and cancel my reservation in Boise for the night. The closer I get to Pendleton the more trucks are parked along the side of the road and the frontage road too is a semi-truck parking lot as they sit and wait out the storm. 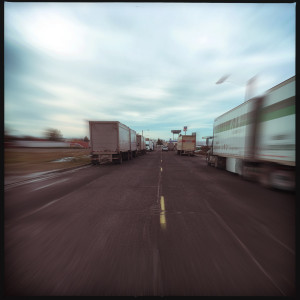 It's only 230p in the afternoon, and Boise is only 190 miles away, but here I sit. At least it's not Rock Springs I tell myself, thinking back to a few years ago when I was stuck by a storm while heading west on Angus one spring. That storm kept me trapped for two days with nothing to do. And while both towns are along the Union Pacific, and both in the high plains where the wind blows cold, and both are towns where folks wait out freeway closures, I figure this will be just a one night affair and Pendleton has more to offer than Rock Springs did at least. I settled into my room, called my sister and cousin and told them I wasn't going to make it to our planned get-togethers in Boise, and promptly had a nap since there was nothing on TV.

Small towns in this part of the West are usually, to me anyway, fun to explore and just look around. Even when I'm passing through I often take the main route through town rather than stick to the Interstate just to see what's there. Pendleton is no exception, though it's not really "small" it's not a big city either -- more like a very large small town. The Union Pacific mainline from Utah and Wyoming up to the Northwest goes through the center of town which sits at the bottom of a gully with the Umatilla River running through it while the Interstate skirts the town on the bluffs to the South. The trains roar through town, past the grain elevators and small main street with it's two-story buildings, and the large rodeo grounds just outside of town.

One thing these small towns still have are classic old neon signs, and I love walking around at night looking at them. It was cold -- in the high 20s, and there was virtually no one on the streets, but the neon glowed warm. These older signs are long gone from the big cities, but out here in the small towns of the west, where businesses have lasted for generations, the old neon still glows and it makes me think of the days before the Interstates -- when people drove the old highway (in this case US-30 and US-395) or rode passenger trains like Union Pacific's "City fo Portland" that stopped briefly then hustled down the tracks to Chicago or Portland. There hasn't been a passenger train through here in more than 20 years now, and US-30 is part of I-84 up on the ridge. 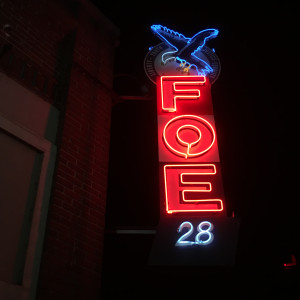 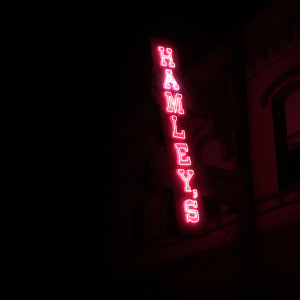 But the Fraternal Order of Eagle's lodge #28 still meets here, and people still grab a drink at Hamely's, or at the Shamrock. When they die their final arrangements are most likely taken care of at Burns Mortuary, just like they have for generations. 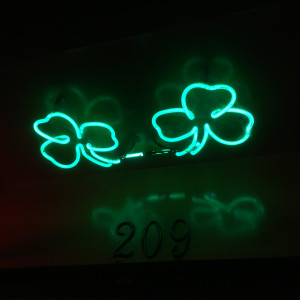 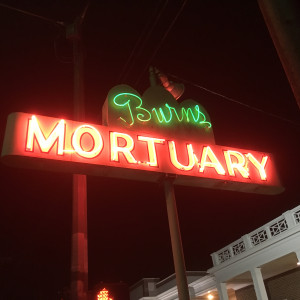 The streets are quiet and dark -- and it's barely 7pm on the shortest day of the year. The sidewalks are icy in spots, and it's cold and brisk outside. Feeling a bit hungry I start looking for a place for a bowl of soup and something else -- not wanting to eat too much since I haven't had really any exercise today. Off the main street I find a scene out of an Edward Hopper painting -- a small lunch-counter diner that appears to have been here for a hundred years, and in fact the sign on the building says it's been here for close to that. It's called the Rainbow Cafe. 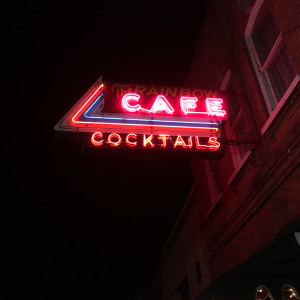 This is my kind of place. Quiet, kind of lonely, but with a piping hot bowl of a very good vegetable soup. I have the place pretty much to myself except for a couple of cowboys playing pool, a couple in a booth and another sitting at the bar, along  with the waitress who's watching a football game on the TV and chatting occasionally with this snow-bound traveler who's holed up for the night. 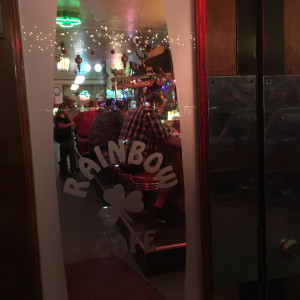 It's a shame that the truckers and other travelers waiting it out up along the Interstate and it's frontage roads don't venture down the hill into town and pack the Denny's and Shari's out by the freeway. They aren't going to get vegetable soup like I got there, enjoy glow of the neon in the old town, or listen to the sound of the passing freight train as it rumbles through this dark on it's way to the coast. But then again I'm glad they don't venture too far off the Interstate. I don't like to share places like this with folks who won't appreciate it.  People who's goal is to get down the road as quick as they can, or who won't take the risk of eating in an unknown place that doesn't have a name they recognize. It lets me enjoy the quiet and appreciate the past.
Subscribe