The first election I really remember as a kid was the Nixon/McGovern election of 1972. The neighborhood polling place was in my elementary school outside of Salt Lake City. They closed the gymnasium that day to set up the voting booths. On the stage they set up tables where election workers hand tabulated paper ballots all day long. Great big paper ballots that were folded and put into a ballot box.  We had a mock election in school using sample ballots as a way to teach kids about voting -- Nixon won easily, this was Utah after all.  I voted for McGovern just to be contrarian as was (and maybe still is) my nature. I remember my Mother coming up at lunch time to vote and chatting for a minute out on the playground. Years later when I could understand such thing she told me she skipped the Presidential part of the ballot that year as she couldn't stand either candidate. Until this year I didn't really get how she could do that. I've voted in every single election I could since I was able to vote. I've never not been able to find a candidate to support and feel good about voting for, even though I may not have agreed with everything they stood for. Until this year. 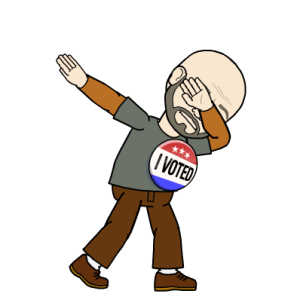 But I didn't skip voting the Presidential line this year, even though I detest Donald Trump, and I'm not at all a Hillary Clinton supporter. I know now what it feels like now to vote for the "lesser of two evils". It makes me sad -- almost ashamed in a way. Usually voting has been a very special almost sacred act for me. I was sad when Washington State converted to all mail-in ballots, as I loved going to the polling place on election day. When I moved to California I elected to get a mail in ballot although I could go to a polling place here. I loved standing in line with my fellow citizens in a church or school auditorium, signing the register, getting a ballot and going into a booth, making my selections and taking my ballot back and dropping it into a slot and getting my "I Voted" sticker. Knowing that I had exercised my right as an American citizen to choose my leaders. I always felt good about it -- even when my candidate lost.

As I was slamming through my cardio workout this morning at the gym, watching CNN on the TV, they cut to a shot of Mike Pence going to cast his vote. He walked from his home, the Indiana Governors Mansion, across the street to a school. The poll worker asked him what precinct, and, like many of us, he didn't know.  They looked him up and sent him to a table where he signed in and got a ballot and voted, just like the rest of us do (or did).  He's no different than anyone else, even though he's the Vice-Presidential candidate. They showed Clinton and Trump doing the same thing.

Watching these folks go through the task -- along with the poll workers helping them and the machinery that makes it all possible I started to feel emotional. This country is truly amazing and blessed beyond measure. We are so fortunate to have the system we have and the ability to exercise our right and responsibility of self government -- so few people have that opportunity the way we do. Two hundred years ago the Founders of this country were quite radical for the time -- believing and developing a system where honorable people can choose their leaders, and in the end respect the results. We may not always like the results, but we honor them and respect them. I do hope I can do that come this time tomorrow. But after watching that segment, showing Mr. Pence voting, seeing the poll workers, the lines of voters waiting behind him to do the same thing, and despite disagreeing with everything he campaigned on and despising his running mate, despite not being happy with my own choice and wishing I could have voted for someone else, I no longer felt ashamed or even sad for exercising my right and responsibility.  Yes I had to choose the lesser of two evils -- but I can be proud of my choice and more important, I can be thankful and proud that I was able to do so. And stragely enough it took Mike Pence to remind me of that. 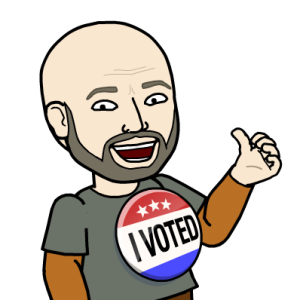 And come tomorrow we will all have to figure out what to do. Regardless of the outcome, I'm afraid the next few years are going to be rather unpleasant. It's been said that in order to truly change what's wrong, you have to hit bottom. Maybe this is the bottom. Maybe the next few years we can figure out how to come together and work on the things that we all agree on. We used to be able to do that. When I got into politics as a lobbyist years ago we did and I truly enjoyed my work. By the time I retired at the end of 2013 we had ceased doing that and I hated what I did. It's one of the reasons I left. I hope after all this is over maybe we can once again.
Subscribe