The Only "Openly Hispanic Legislator"

The process of leaving one's home of 26+ years is always a daunting job. The task of packing up the home means that you will, quite literally, touch virtually every single object you own! But I think the toughest thing is leaving long-time friends behind. And while I've been wintering in Palm Springs for the last three years -- spending only half a year in Seattle, this town has, until now, been home. It's where most of my closest and dearest long time friends reside. When I retired I didn't see them as much, but they -- and I -- still resided here. But when one decides to relocate, in many ways its a "goodbye". And I've been saying a lot of goodbyes this summer, and more so as my move date rapidly approaches.

Today it was a final lunch at a favorite restaurant with a dear friend. I first met Margarita Prentice within a few weeks of moving to Washington in 1990. I was the newly hired Director of Government Affairs for the Washington Credit Union League, and she was a newly elected member of the state House of Representatives after serving a partial term as an appointed legislator. Because she served on the Financial Institutions Committee, I went to a fundraiser for her with a check from the Credit Union PAC.

There I found a short little Mexican lady who reminded me very much of my former boyfriend Ruben's mother. She was a nurse by trade and a big believer in credit unions. When she found out I had just moved from Phoenix she told me she was from there and we talked about Arizona and credit unions and my work teaching ESL as a volunteer in Arizona. That lead to me being "volunteered" by her to help out on a lot of things, and we became very close. She attended an early Human Rights Campaign Fund/Privacy Fund dinner -- at the time I was the treasurer of that PAC. The biggest laugh of the evening came when she introduced herself as the state's "Only openly Hispanic legislator", to a crowd of openly gay political contributors. The only other Latino in the legislature didn't admit his ethnicity as she did. She was always a stalwart supporter of same-sex issues as well. To this day she still asks how my former husband Tony is doing and makes sure to tell me send him her love.
Margarita represented the 11th district of Washington -- at the time it was Renton and part of West Seattle. In 1991 she ran for the vacant Senate seat in that district and won. It was a tough primary but she carried the day and I worked on her campaign. This photo is from 1992 with the other members of the 11th District -- Representative Velma Veloria who replaced Margarita and Representative June Leonard, Senator Prentice, and me -- sans facial hair and much younger. 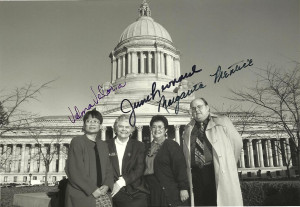 At the time the Senate was under Republican control, and she was assigned to the Financial Institutions Committee where she continued to champion credit unions. That was also the year I left the Credit Union League and started my own firm, which also represented the largest credit unions in the state among other clients. Our friendship gave me an open door with Senator Prentice and our friendship grew because of it. Two years later when the Democrats took the majority in the Senate, they named Senator Prentice chairwoman of the Financial Institutions Committee. Being one of the only Democratic affiliated lobbyists who represented financial institutions, I remember very well the look of panic on the faces of the banking lobbyists when they learned that a very liberal, staunch credit union supporter was given the chairmanship of their committee. I of course thought it was the best thing in the world.

In the 24 years she served as a legislator she accomplished more than many long serving members, and rose in power and influence over time, eventually becoming chair of the Ways and Means committee responsible for the state budget, and even Senate President Pro-Tem her final year. Her complete legislative bio is here http://www.historylink.org/File/9502 if you want to learn more details on that, but this post is about our friendship more than her legislative accomplishments, and there are far too many stories to tell in this short post.

As her power and influence rose so did mine, and as the years went by I had unprecedented access to the Senate wings and the members of that body who adored her as much as I do. I owe a lot of my lobbying success to our friendship. She had only token opposition in most of her campaigns, and after 1992 it was really just me and her doing the bare minimum -- raising money, putting out yard signs, placing a few adds and maybe a mailer or two. And we did spend a lot of time together -- both in Seattle when out of session and in Olympia when in session. She had some health scares -- including a session in a wheel chair because of a broken ankle, and I enjoyed being her chauffer, both pushing the wheel chair and thus keeping other lobbyists whom she did not want to visit with away, and taking her to and from events in my Hummer.  Getting her in and out of that giant truck always was a chore -- she is short enough to just about walk under it -- but we managed, and she loved the big rig and the fact that it so irritated many of the "greenie" types that live in Seattle. We once drove up to a fundraiser for the Governor in it, and all eyes turned when this monster truck showed up with the Priuses and Subarus and this short little lady hopped out.

When her husband passed away in 2003 I was a pallbearer and my Hummer was second in line behind the limo she and her family rode in and the hearse. After the graveside service she asked if I'd take her son and the other younger nephews for a ride in it and we went bouncing around the back part of the cemetery on the left over dirt piles from graves. We didn't think anyone noticed but when we got to the reception after -- a little later than we planned -- I said "sorry we got delayed" and she smiled at me and said "yeah, we all saw how you were "delayed", thanks for entertaining the kids."

Those Hummer rides were actually featured in an "attack" ad that was ran against her in her final campaign in 2008. Her token Democrat opponent in the primary was a young buck who though he knew it all and could tie her to a "powerful lobbyist." One campaign mailer said ""Prentice often gets around the state capital in a yellow Hummer driven by Gary Gardner a powerful lobbyist for MoneyTree and other financial interests".  It was one of my proudest moments in my lobbying career -- and hers.  She pulled no punches and often told everyone that "Gary is my best friend."  I was touched and very humbled by that.

But by the same token, we often disagreed on policy and issues, and I didn't, contrary to popular belief, always get my way. She took great pleasure in beating me at the legislative game on some issues, and when people would say "Gary always gets his way" she'd start ticking off all the times I didn't. In the end I think I lost more than I won, and I'd tell potential clients who wanted to hire me to try and get her to change her mind on something that if I knew she was strongly opposed to what they wanted they would be wasting their money.

She retired at the end of 2012, and I lasted one more year and retired at the end of 2013. During those final couple of sessions we'd have dinner once or twice a week -- usually at a down-home Mexican place where she'd practice her spanish, or at Sizzler where she loved using her senior discount. Most lobbyists colleagues were aghast that we'd go to such dives when they all took legislators to the two or three fancy places in Olympia. But I was the one squiring the Chairwoman of the most powerful committee in the Senate to dinner twice a week or more -- even if it was just Sizzler.

Back in Seattle we had a favorite place that we'd go to once or twice a month just to visit and gossip and talk politics and family. It was the clubhouse restaurant at Foster Golf Course down the hill from her home in Renton. We were such regulars there that they'd be concerned if we didn't come in after a few weeks. We held many a fundraiser for her and other candidates there as well. It was -- and is still "our place".  She'd call or I'd call and say "lunch?"  the other would say "Billy's" and one of us would give a time and we'd be there. Lunch would often last for two hours or so.

Today was the last of those lunches -- for a while. I interrupted my packing for a final lunch with my Senator. She always could get me to drop whatever I was doing at the drop of a hat. Our friendship is that strong. 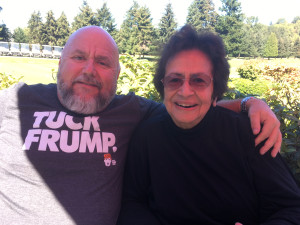 We sat out on the patio on a glorious Seattle afternoon, and I wore my "Tuck Frump" shirt just for her which she got a big kick out of. Funny my beard gets grayer -- her hair doesn't. It's as black now as it was when we first met. We talked about politics as usual, and about family and the weather and how much we both detest Seattle these days. We talked about Phoenix and the desert and her love of Frank Sinatra and old movies and her little dachsund who is very protective of her and hates me. We laughed over old stories -- we have enough to fill a book, and maybe one day we will. The owners came by to say they were worried they hadn't seen us in a while. It was hard to tell them I was moving. I picked up the check one last time as a good lobbyist always does, and hated to see the afternoon end, but the boxes and packing tape were calling me.

I hate goodbye's, I really do. I hope it's not, but we all know how things change when one is away for a long time. I much prefer "see you down the road". She hugged me and said she loved me, and I did the same. My eyes got watery as I watched her drive away. "It's not goodbye" I said to myself, and mouthed to her "See you next summer."

Our friendship will last -- we'll talk and email, but its gonna be a while before we have another lunch on the patio at Billy's or she giggles as she gives people the finger who give us one in my Hummer because it's not "green".  Margarita is much like my grandmother, who I eulogized and wondered how such a big spirit got into such a tiny body. I don't know how such tiny women have such a big influence and presence, and my life in the desert will be very empty without her.
Subscribe