A singer-songwriter by the name of Townes VanZandt once sang ˆthere's no stronger wind than the one that blows down a lonesome railroad line, no prettier sight than looking back at a town you left behind.." These days there's no more lonesome railroad line than the original mainline through the Rocky Mountains, the storied Tennessee Pass line of the the old Denver & Rio Grande Western. The original line was constructed as a narrow-gauge line in 1881, and standard gauged in 1890, and was the main route, albeit rather circuitous, between Denver and Salt Lake City until 1934 when the Rio Grande built a connection between the Tennessee Pass line and the main line of the Denver and Salt Lake RR through Moffat Tunnel.

The massive railroad mergers of the 1990s saw the Rio Grande merge with the Southern Pacific and then the Southern Pacific merged with the Union Pacific and then suddenly the Tennessee Pass line was redundant.  The Union Pacific ran the last train over the line in 1997, nearly 20 years go. Since then the line has been "embargoed", that is the tracks are still there, but they are not in service. This year my best friend Dave and I decided the strong wind that propels us to wander and explore the abandoned mines and railroads of the West, would blow us to Colorado as we needed to see the Tennessee Pass line before it vanished forever, for who knows how long the Union Pacific will keep it, or if they will file to abandon it permanently. 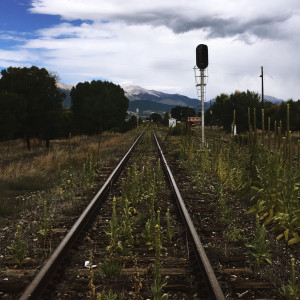 We started our morning in Salida, Colorado at the foot of the grade up the valley of the Arkansas River. The tracks heading generally Northeast up into the mountains, the rails brown with rust, weeds growing between the ties, and the signals dark and silent. For 115 years this line carried freight and passengers into the West, and now for nearly 20, they have been quietly waiting to be brought back to life. We followed the line up US Highway 24 towards Leadville and the pass, as it wound through farms and along the river and high mountain valleys surounded by 14,000 foot peaks -- every several miles signal masts still standing, staring blankly down the tracks, their electrical components stripped and stolen by copper wire thieves over the years. 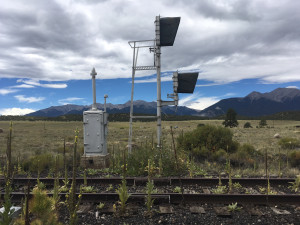 The climb up to the summit of Tennessee Pass is more than 40 miles from Salida, the tracks crossing the Arkansas river on bridges still lettered for the Rio Grande which disappeared into the Southern Pacific back in 1988, and sometimes the sage and wild fox gloves would grow to near tree sized between the ties, and up over the signals. 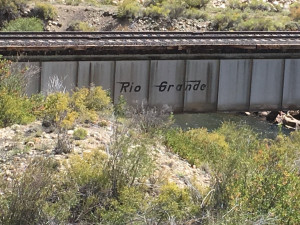 At the top of the pass, the railroad tunneled underneath the mountain, and there is a small yard with a wye for turning helper locomotives that were attached to trains to help push them up the 3% grade on the West side of the pass. The tunnel had gates that lowered in the winter to keep snow from drifting in, and the tracks, rusted and unused that haven't seen a train in nearly 2 decades mean that generations of chipmunks don't need to worry about getting squashed. 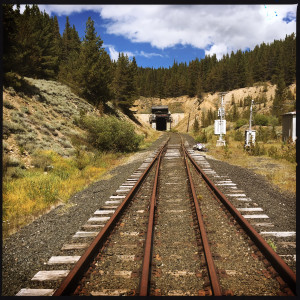 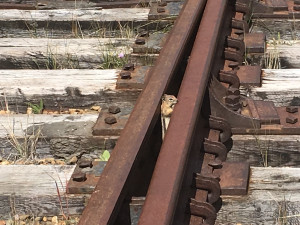 The tunnel, lined in concrete, and like all blank canvases attracts spray paint artists. And even though it's miles from anywhere, it is now covered with graffiti -- and is substantially cooler than the bright sunshine outside. It runs under the highway crossing which sits at 10,424 feet above sea level. The light at the end of the short tunnel is the daylight on the other side, not the headlight of an approaching train these days. 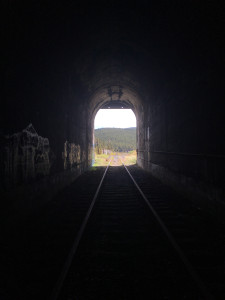 The line dropped down the West side of the pass, heading down towards the Colorado River and into Utah. The grade is nearly 3% here -- exceptionally steep for a railway, with the tracks curving their way down the mountain and along the headwaters of the Eagle River and towards the town of Minturn at the bottom of the grade. The railroad following the river, and the highway which came much later, clinging to clifs and soaring over canyons on high bridges. In Minturn there was another small yard, and a place where the train crews rested in a dormitory motel. The area still posted as property of the Denver and Rio Grande Western RR. The road across the yard tracks has been paved over by the town, although the crossing arms and flashing signals still stand waiting to warn motorists if a train is approaching. 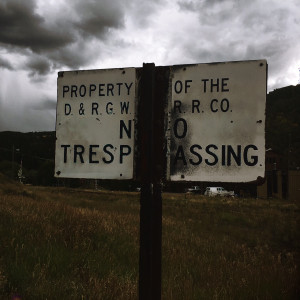 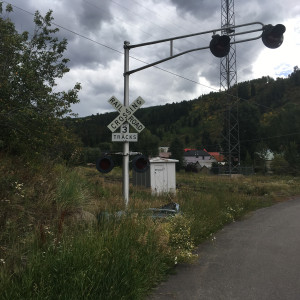 Whether this amazing feat of railroad engineering through some of the most glorious scenery in Colorado reopens remains to be seen. When Southern Pacific merged with Rio Grande it became a major line for traffic from the San Francisco Bay area towards Kansas City and Chicago via Pueblo, Colorado. But the connection to the east at Pueblo -- the old Missouri Pacific -- now too part of the giant Union Pacific, has been abandoned and torn up, so even if trains do run over Tennessee Pass once gain, there is no place for them to go except north to Denver, and this steep line is a much longer way to get from Salt Lake to Denver than the current line. The state of Colorado has identified it as a key rail line in case the current and more direct route Moffat Line through Moffat Tunnel ever closes, the tunnel has issues, or becomes too busy, so they oppose abandoning it. But time, weather, and disuse, not to mention metal thieves and vandals will continue to take their toll on the tracks. But I suspect, just like the wonderful line over Snoqualmie Pass back home in Washington, it will one day be torn up and allowed to revert back to nature or become a hiking/biking trail.  I never saw the old Milwaukee line over Snoqualmie Pass with tracks. At least I can say I did with the Rio Grande.

Some twenty miles past Minturn, at the unremarked spot called "Dotsero" - so named as it is the "dot zero" point on the survey of the Colorado River which started where the Eagle joined the Colorado -- the Tennessee Pass line then joins the present Denver to Salt Lake mainline. Although now owned by the Union Pacific, it will forever in my mind be the Rio Grande.

And ironically at Dotsero where the track from Tennessee Pass curves to join the main line to Salt Lake the signal still glows red, unlike all the other signals on the line -- facing up a track that hasn't seen at train since 1997.  I suppose just in case a long lost ghost train comes winding downgrade from Tennessee Pass along the most lonesome railroad line in the world. 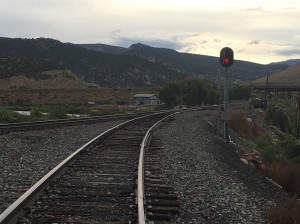